Daedalic Entertainment’s Deponia Doomsday has been released for PC on various digital distribution services. The game is a traditional point-and-click adventure and it’s available for purchase right now. Some gamers who have it may have run into a bit of difficulty getting past some of the more challenging aspects in the game, but there’s a complete gameplay walkthrough guide available to help with some of the more challenging aspects of the game.

YouTuber Furo has a complete walkthrough available of the game, spanning the likes of 21 videos from start to finish. You can check out the walkthrough below.

Most of the tutorial will walk you through the early minutes of the game as you get a blowtorch and a makeshift flamethrower and eventually cut your way into the base.

As the monsters begin to chase you you’ll need to use the makeshift flamethrower to burn the monster that grabs your ankle. Continue to run up the steps and close the door. As you keep the door jammed on the monster, grab the pole on the left side of the screen and place it into the hook to keep the door locked.

Head over to the control panel to activate the button. You’ll end up on the bomb fighting off the monsters while trying to de-clamp the bomb. Continue to alternate between kicking the monster and kicking the clamp.

The next half hour centers around repeating a series of events involving a time traveler named McChronicle constantly running over the glasses of Rufus’ girlfriend Toni. After going through a couple of those segments and repeating it due to the pink elephant constantly ruining things, you’ll need to find a way to stop it.

When talking to Lotto, ask about his “bust” to get the wire. Head into the bar and grab the straw out of the cup and the dart off the board. Throw the dart at the board to win a prize, which is a power inverter.

Use the power inverter on the Chillbot and put it in the machine and use the cup from the bar to put under the ice cube dispenser. Put some ice in the cup. Head to the village and use the cup with the ice in it and place it on the barbecue grill to melt the ice and turn it into a cup of water. Use the cup of water on the baked potato to cool it down and then grab the potato off the grill.

Use the tinfoil that you got to turn it into a tinfoil hat. Give the hat to the drunk, Tuck. Head back to McChronicle and revert time again. With Tuck now wearing the tinfoil hat it’s possible for McChronicle to park the truck without breaking Toni’s crystal glasses.

Head back to get Toni and take the straw, glass, beard and dart from the wall. 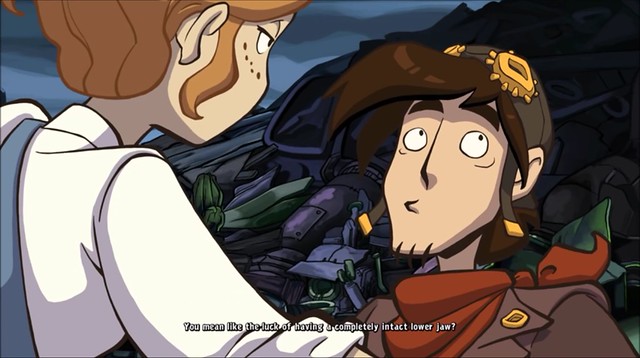 You can use the wrench to take the tap cap off the accelerant in the shop where Toni is. Head to the barbecue and use the tap on the honey barrel. Use the honey on the beard to make it sticky and give it to Rat Boy. This will allow you to play the stinky fruit mini-game.

After winning the stinky fruit game, open the wax drawer with the bees inside to draw them out and grab some wax. Bring the wax to Lotto and give it to him as a way to wax his legs. Ask for his shaver.

Use the shaver on Rat Boy to shave the bee-covered beard off his face.

Head to Zoon and give him the rat with the hunting license in it. Give him the dart, the straw and the bee-covered beard to make a high-precision blowpipe.

After getting the blowpipe made grab the big game elephant hunting rifle. Head to the bar and use the high-precision blowpipe on the dart board to knock out the bartender. Once he’s knocked out grab the throttle limiter.

Use the throttle limiter and the power inverter on the Chillbot. You’ll need to modify the levers to turn off the killbot and thrillbot modes. Afterward, put some ice in the glass. Head back to the barbecue and melt the ice in the cup. Use the ice water to chill the baked potato. Grab the potato and unwrap it from the foil. Put the potato in the machine to split the potato in half. Use the split potato on the wire that Lotto gave you to create ear protectors. Give the ear protectors to Zoon.

Head back into the secret area and give Tuck the loaded gun. 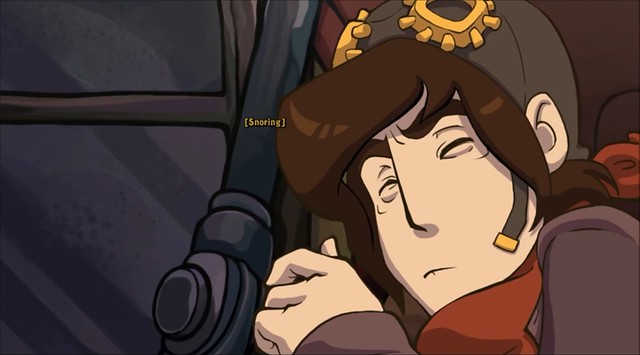 After reviving time again, you’ll need to build a trap for the pink elephant. Use the wrench to take the sign down. Head into the secret lair and put the bubble wrap down and knock one of the toilet seats off the overhang. Grab the toilet seat and put it on the bracket just outside the secret elephant lair.

Use the crank to raise the bracket with the toilet seat on it and then grab the rope and throw it over the raised toilet seat bracket. Open the hatch, pull the noose and close the hatch on the noose to set the trap.

After the fit with Toni and the explosion, grab some burning rubble and head to the airship. Throw the rubble in the stove to lift off.

After meeting the time traveling pink elephant use the lever to eject them out of your view and escape the lynch mob by heading into the secret lair and getting into the UFO. This will lead Rufus and McChronicle up to Elysium.

For the trapped guy in the fallen rubble, you can grab the pole from the debris and use it to open the store room in the hallway. Grab the paintball from the store room and press the button on the wall to participate in the paintball mini-game. You’ll need to fill the paintball gun first. Grab the explosive canister from inside the UFO and put it on the ice cream and it will blow it up when it hits the bottom. Use vanilla button to further unravel the unhooked rope. Hook the rope to the pipe and it will break the pulley system. Use the cable reel and throw it in the window box. Use the pole and place it between the gap. Destroy the balcony to destroy the rest of the place, which brings Goal into the picture.

In the segment with the ID card on Elysium, you’ll need to let Precious free to run around in the tunnels. Grab the laser pointer and use it to direct Precious through the pipes to the opposite side. Help McChronicle in the pipe by pushing him through. When he comes out the other side give him the antidote to help him. As he farts into the pipes, head back up and when Cletus moves over to the other pipes pop out of the pipe closest to Cletus and grab his ID card. Use the card to call down the elevator.