Daedalic Entertainment’s Silence: The Whispered World 2 has launched for Xbox One, PS4 and PC. The point-and-click adventure game sees players on a grand adventure across a fantastically designed alternate world. For gamers looking for a walkthrough of the game, there’s one available covering the game from start to finish.

YyouTuber Game4Ever has a complete playlist for Silence covering the game’s puzzles and story. You can check out the video playlist below.

Silence starts with Renie and Noah hiding in a bunker while air raids take place outside, bombing everything in sight. You can interact with the television, the lampshade, and the three balls to juggle in an attempt to cheer up Renie.

Grab the stuffed donkey head and put it on; grab the sock off the post and then talk to Renie.

In the next segment, you’ll need to move the concrete slabs over and grab the sock and egg from under the concrete.

Grab the hammer from the corner of the room and smash the television to shut it off.

When you get to the part with the green mist, hop down to the clock and from the clock to the globe; balance on the globe until you can hop into the pot and then from the pot you’ll need to pull the armor into the green mist and climb up on the rail to escape.

When the chick in the armor tells you to shut up and get down and hide… you need to do what she says, otherwise you’ll die and have to wait for the game to reload and it’ll take a really long time. 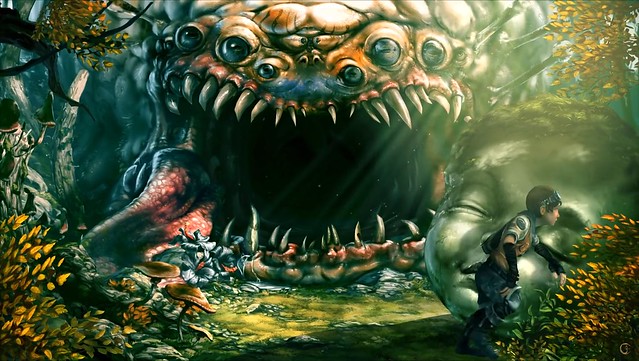 Try to roll the head and Spot will make noises. You’ll need to crack the egg open – head to the Critter and try to get the Critter out of its nest; it won’t move. Instead, you’ll need to head back to the area with the head and a worm will pop up. Try to grab the worm and the worm will zip away into the hole only to pop up and get eaten by the Critter. When the Gritter is gone from its nest, place Spot inside so it can hatch.

Have Spot transform into a flat surface and slide Spot under the head to roll it and use it to climb up.

In the next segment you’ll need to help Kyra blow up the bridge. Talk to Kyra and then head back down and help Spot earn a new form by having it drink from the puddle. You can water the fart mushroom, as well as water the dead flower near the worm.

Take the loose tooth from the worm and then head to the pond to clean up Noah’s hand. You can feed Spot and then turn him back to normal and have him sit on the fart mushroom to get blasted up to the top of the platform.

Have Spot slink underneath the ring of the bridge and then as Kyra counts down, have Spot bloat up to destroy the ring and collapse the bridge.

You’ll need to heat up the berries to extract the bitterness. Open up the giant fish skull to hide inside while the Seeker puts the masks by the moss. Use the masks to throw them in the fire and then open up the giant skull again. Put the Seeker masks into the open big skull and kick open the smaller skull to take the knight’s helmet.

Scoop up the burning honey with the knight’s helmet. Pour the honey into the methane spot. Head back to the area with the moss and put the wet moss into the helmet.

Boil the helmet with the water it over the fire. Use the super barf juice into the plant’s mouth to free Horus the bird.

Lift up Kyra when it switches back over to Noah to try to get her up the tree. The game will then switch back over to Renie. You’ll need to pull Reine out from getting stuck at the rock, as well as lift her foot out of the mud. Grab the spear and throw it at the Seeker’s side to set it on fire.

When it switches back to Noah, proceed to kick the tree until the glow flies come out and steal Kyra away.

Head down into the hole and have Spot jump over the tendrils. Allow Spot to eat the royal jelly to and talk to the Queen to soothe her.

Have Spot turn into a flat form and use him as a bridge underneath the cocoon with Kyra to use him as a springboard. Have Noah jump up. Before Noah can free Kyra, however, he’ll need to lower the red roots. Do so by having Spot soothe the Queen again, and head across the path and out of the cave. Pull out the red root and it will lower the cocoon with Kyra inside. Create a spring bridge and jump up and grab her.

Have Spot soothe the Queen again and then use the tendrils as defibrillators to revive Kyra. 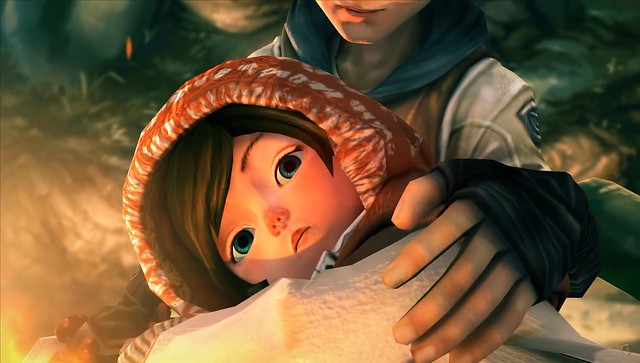 You can talk to Samuel and Kyra about Janus’ message and then venture down toward the ruins. Push the sliding door and head inside.

Head up to the second floor and take the metal latch out of the window to use as one of the three rungs to create a ladder.

Look at the bolt at the gate and take the bolt out of the latch holding up the chandelier.

For the musical mini-game, you’ll need to shrink the lute, make the flute medium sized and the triangle small. It’s showcased in the video at the 20 minute mark in the video below.

Noah will need to head through the crater toward the door being blocked by the Seeker. Head back to retreat to avoid being killed.

The game will switch over to Renie who can rummage through the chest and fire off the flare gun. When you get an opportunity to play as Renie, head to the place where Noah was previously and have Spot eat the mushroom so you can squeeze through the hole.

Spot won’t enter until the druggy flowers are closed. You’ll need to stop the flow of water. In order to do so you’ll need to have Spot turn flat under the guard dog and then bloat up to move the dog off the wooden door. Push the door into the hole so the water will stop feeding the plant so spot can enter into the room.

Use spot to bend the bars on the gate by turning normal, squeezing through the bars and then bloating up to open the bars. Climb up and grab the chain and then attach it to the gate.

Head up to the top of the platform and have Spot stretch out and cover the window so that the last plant will close up and then you can climb up the makeshift ladder rungs.

Have Spot follow Renie into the lava crater and then annoy the Seeker. You can then walk past the Seeker toward the stone gate and talk to the rock, Yngo.

Use a rock to break the quartz and take a piece of it. Use the shard of quartz to give to the Seeker. Ralv is on the surface just behind the lava. Use Spot to stretch across the lava and then roll Ralv across Spot.

Talk to the two rocks about the prayer stones since you won’t be able to move them on your own. They’ll need to sing in order to move them. Use Spot to create a bridge to the prayer stone on the far left and then have the rocks sing to move it into place.

For the second stone, you’ll need to have Spot go back to the lava pit and eat some of the lava. Use Spot to fire the lava at the bush to burn it away and then have the rocks sing again to move the stone.

For the last stone use Spot to grab lava from the crater and then spray the lava on the third prayer mill stone to fix it and then move it into the slot.

Turn Spot into a flat surface and force him through the door to proceed to the next segment.

Use Spot to lick up the slime; attach it to the rock stock in the nostril and then forcibly pull the rock out of the hole and roll inside and up on the dragon’s back.

Head back down and use Spot to slick up the slime; head through the nostril on the dragon’s back and then use the slim to snatch up the shard.

The next puzzle involves crossing the bridge chasm, which isn’t quite as difficult as the dragon puzzle with Spot.