Ken Follett’s The Pillars of the Earth Gameplay Walkthrough

Daedalic Entertainment’s Ken Follett’s The Pillars of the Earth is currently available for home consoles and PC. Gamers interested in the multi-book series turned into a multi-game series who may be interested in some of the story elements and choices, there’s a walkthrough available.

YouTuber Nokzen has put together a walkthrough series of the game, allowing players to see what the gameplay choices are like in the new title.

The game walks players through the basic gameplay mechanics, including how to gather clues, pick up items and talk to others. The game utilizes a basic point-and-click interface, so anyone familiar with those kind of games will be right at home with Daedalic’s hand-drawn title.

The first task is to collect some water for your family. In order to do so you first need to pick up the metal bucket and head to the far right of the screen into the deep woods.

Use the pot to break the frozen puddle.

There’s a short mini-game you’ll need to play through in order to break the ice and collect the water.

Take the water back to your family and place it over the fire. You’ll have to choose selectors to explain to Martha how to build a cathedral.

When Agnes goes into labor, ask Agnes what you can do. Ask again and she’ll tell you to make the children do something. Tell Martha to get some reeds and for Alfred to get some warm water.

When Alfred comes back, tell Alfred to build a bigger fire.

After the prologue, Book I: From The Ashes will start. The first chapter focuses on Philip.

You’ll come upon a novice heading into town. You can either reprimand the novice or give him cheese.

Head over to the left of the screen after the bell tolls, and there you will find some beech nuts on the ground. Take them.

Proceed toward the road to Kingsbridge.

Head into the cathedral to join the other monks.

You can talk to the other monks about how things are going at the priory, either telling them it’s doing fine or doing better than the priory in Kingsbridge.

You can then ask about how Brother James died.

You can also talk to the young monks about God’s Temple… and either tell them that James did or did not commit suicide.

You can also ask the young monks about Brother Francis. Drag the icon from the UI over to the two young monks to ask them about him.

Proceed to talk to Brother Andrew and Brother Cantor.

Head outside and then proceed to talk to Brother Arnaldus in the graveyard.

Eavesdrop on the two novices fishing by the river to find out where they hid Cuthbert’s keys. You’ll find them inside the church.

Go into the quarters of Brother Remigius to ask him about Brother James’ death.

Head into the main chapel to talk to Brother Francis. 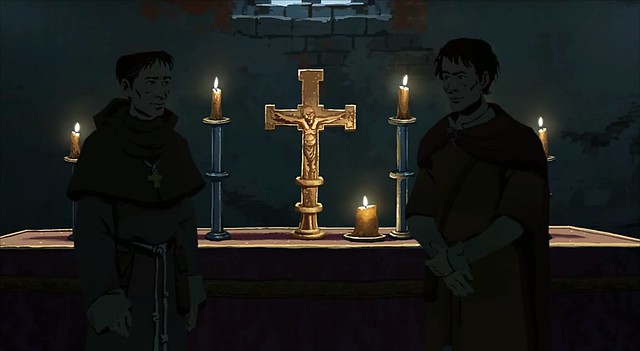 During the talk, you can choose to ask about how you can help to prevent war or opt to not get involved.

If you search behind the table where Francis is standing, you can find Cuthbert’s keys.

Go to the kitchen to talk to Brother Milius. He’ll suggest you to take a hot stone from the fire. Use the cloth from your inventory to grab the stone.

You can also give Milius the beech tree nuts you picked up outside the of the priory.

You can also talk to Milius about Brother Remigius, and either agree that he’s bad for the priory or say he’s misunderstood.

Talk to Cuthbert about his missing keys. You’ll have a choice to rat out the novices to Remigius or not. Head to the toll hut to talk to Brother Paul. Give him the hot stone to warm him up.

Paul will inform you that when talking to Remigius if you stay silent during discussions he will become angered.

Also, ask about the knight and Paul will inform you that the knight died and was buried in the cemetery.