Winged Cloud has a short and sweet little yuri adventure-fantasy kinect visual novel with no alternate pathways or endings, just a straight-through reading experience that lasts for a couple of hours featuring a female warrior who teams up with a beautiful young mage as they battle monsters and delve into their interesting pasts.

Due to the short length of Winged Cloud’s CG-oriented visual novel, you can pick it up for only $1.99. During the first week of being on sale you can grab for 25% off the normal price for only $1.49. 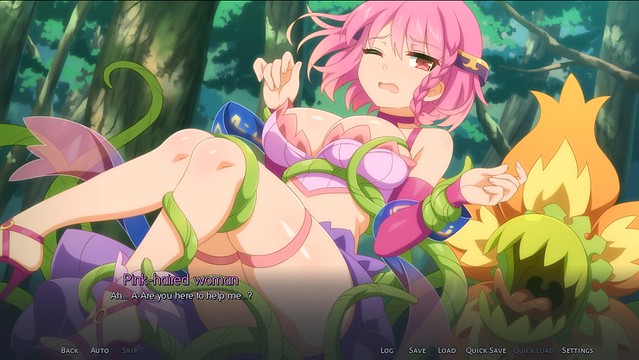 The story centers around the mysterious Arcadia, who has been a young warrior all her life, even gaining great fame and renown for her feats. However, she has a dark secret in her past relating to her village being completely wiped out from a dragon but she did nothing to stop it, causing some of the survivors to resent and hate her.

She ends up teaming up with the roseate but blundering beauty named Cecily, who has mastered some magic abilities. The two end up going on an adventure of both self-discovery and with a side-order of peril. You can get a very brief glimpse of what the art is like and an introduction to both characters with the trailer below.

The trailer sadly doesn’t go too far into detail of the story or the characters, and that’s partly why Legends of Talia: Arcadia has a few negative reviews on its tab already. Some complained that it’s just too short, and that the yuri is just only barely there, and that the kinetic approach to being a linear visual novel with no alternative routes or choices has made it difficult to play again.

Others, however, believe that it’s a good introductory visual novel because it doesn’t bog newbies down with hours upon hours of dialogue and chatting. Instead it focuses more on telling the story in a cohesive and straightforward manner.

For $1.99 you can decide for yourself if two hours worth of a linear visual novel is worth your time or your money.

Most of everyone agrees that the art is fantastic, as is usual for Winged Cloud, and the story is good for what it is. If you’re interested in Legends of Talia: Arcadia you can check out the Steam store page.