Guardians Of The Galaxy: Telltale Series Episode 5 Walkthrough And Choices

It’s finally here, the season finale for Telltale Games’ Marvel’s Guardians of the Galaxy for PS4, PC, Xbox One and mobile devices.

The fifth and final episode of the season wraps up some of the lose ends presented throughout the five episode arc, and will give fans a look into what happened to some of the widely disparate choices that wrapped up Episode 4. If you’re keen on finding the right choices or you need to compare some of the decisions in order to get the most out of your playthrough of the game, there’s a walkthrough available for Guardians of the Galaxy: The Telltale Series – Episode 5: Don’t Stop Believin’.

YouTuber MKIceandFire has the full playthrough of Episode 5 up and available, clocking in at just under two hours. You can check it out below.

As some of you know, there were some pretty huge choices in Episode 3 (whether or not you choose to destroy the Eternity Forge) and an equally huge choice in Episode 4 (whether you allow Drax to sacrifice himself or not).

The playthrough above goes with the route that you attempted to destroy the Eternity Forge and that you denied Drax his desire to sacrifice himself.

The episode starts with a news briefing of Hala attacking a planet and killing millions. If you saved Drax then you’ll be with Gamora in the bar at Knowhere, but if you let Drax sacrifice himself then Peter and Rocket will be together in the bar.

Mantis and Groot will come back no matter what, and Mantis will explain that the Eternity Forge is consuming Hala, so Hala needs to consume life to stay alive. 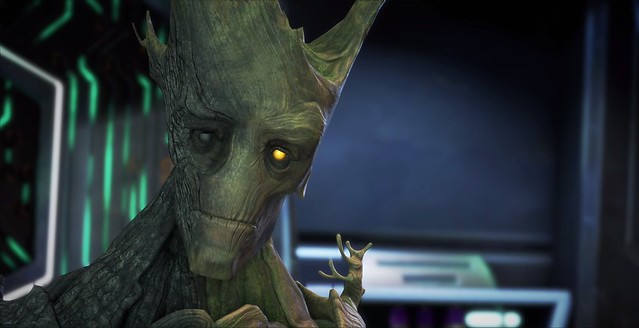 Groot and Mantis will touch and Groot will have a flashback.

As Groot you’ll have a few comical choices to make, mostly quips in reply to Star-Lord and Drax.

While Star-Lord explains his plan use Groot to open the air vent in the jail cell, and use Groot’s stretchy arm to move over to the guard’s shoulder, tap him and then punch him out to take his keycard.

The flashback escape from the prison is nowhere near as dynamic as the Marvel Cinematic Universe version of the escape featured in Guardians of the Galaxy, but it works as the intro to Episode 5.

In response to Mantis’ feelings about Groot’s flashback, you can say something reasonable to progress the dialogue or you can keep saying that the reason the Guardians came together was because of Peter’s ridiculous looking mustache. If you keep saying it’s because of the mustache the dialogue will keep going as Mantis keeps denying Peter the right to praise his mustache for getting them out of prison.

Mantis and Peter will mind-meld and will need to build an emotional bridge across the subconscious metaverse in order to track down Drax and Rocket (or Gamora if you chose to stick with Rocket). 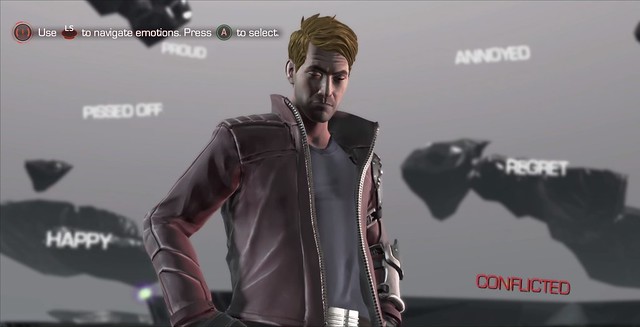 You have to choose from a variety of emotions in order for the emotions to take physical forms and then begin to build the subconscious bridges to the other Guardians. 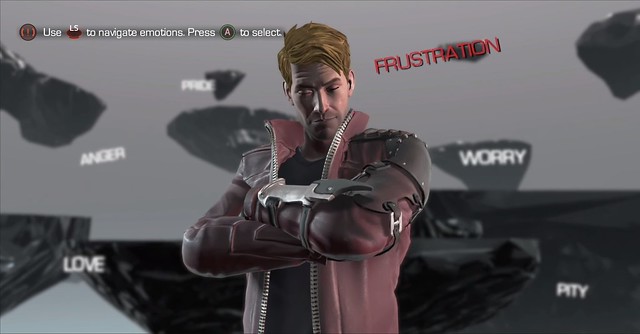 And finally, you’ll have to choose how the victories of the Guardians made Peter feel, this will create a few more spheres. Simply click on the spheres. 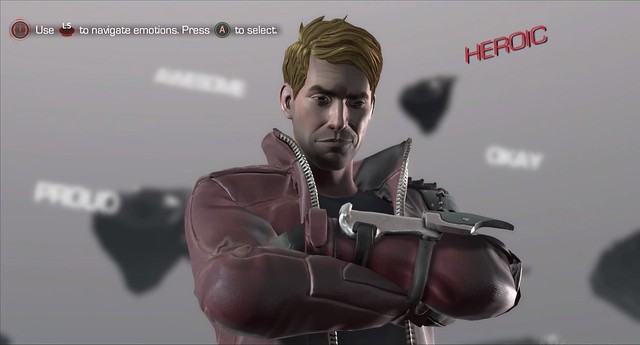 If Rocket is not with you, then he’ll go back to the planet where he buried Lylla. Gamora will go back to where she had her strongest connection with Nebula and Thanos.

You’ll have a choice of either going to get Rocket or Drax first (or Gamora or Drax if Rocket is already with you). 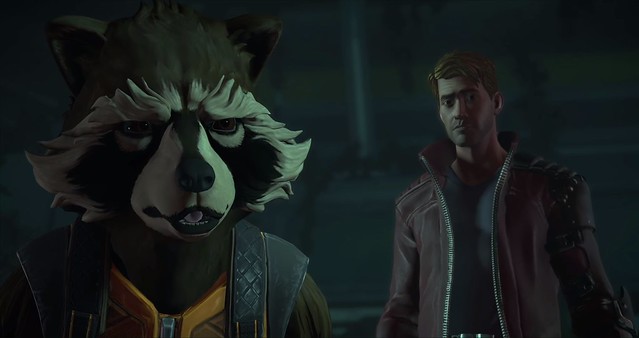 Examine the environment and look at the chair, the cages, and the surroundings.

Examine the bombs on the table.

Pick up the explosives and plant the bombs at Lylla’s cage, the lab chair in the next room, and plant a bomb at Rocket’s cage.

If you tell Rocket friends forgive each other, that Peter is just as afraid as Rocket is, and that the Guardians are family, he’ll remember that.

Peter will also have to go to Kylos to retrieve Drax. Drax’s feelings for Peter will depend on the choices you made throughout the series. You will also be able to choose to either surrender or shoot Drax during the struggle. If you shoot him he will thank Peter for rekindling his warrior spirit. 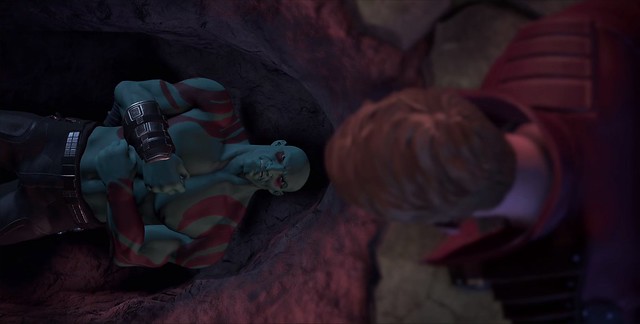 Talk to Rocket about a plan on getting onto Hala’s ship. You’ll have to pick and choose who does what for the final mission segment and assign each person a role.

You can assign Gamora, Groot, Drax and Mantis to the roles of:
Create-a-Distraction
Retrieve Hala’s helmet
Protect the hacker
Hack the computer

The logical roles are:
Rocket as the hacker
Drax to protect the hacker
Gamora to create a distraction
and Groot to retrieve Hala’s helmet.

Before going on the mission, Peter will give a ridiculous speech. You can choose what to say about each of the Guardians, and they will remember whatever you say about them. 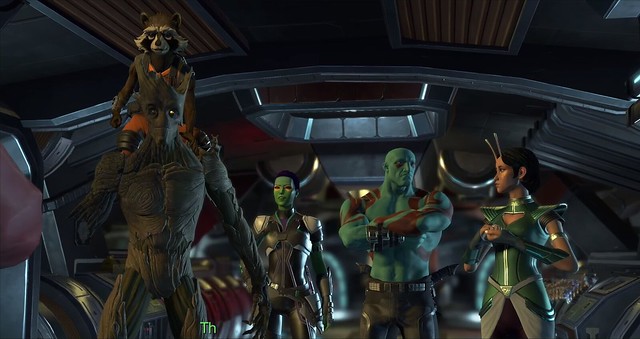 Continue to perform the quick-time events while rigging the super weapon coils.

Once inside the ship, perform the Guardians quick-time fiesta to crush Hala.

A flashback sequence will show Pete and his mom, before getting back to the present. 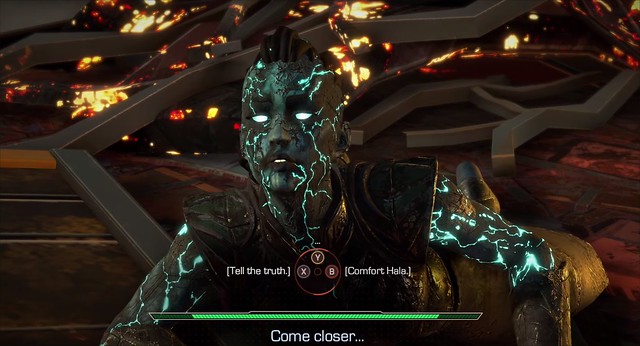 The last big decision in the episode will be Mantis talking to Peter about his mother. You can choose to have Peter experience one last moment with his mother or not.

If you choose to take Mantis’ hand Peter will get to see his mother. You’ll be able to choose what song Peter and his mom can listen to before she departs.

During the final moments the Nova Corps will call saying that they have an emergency. You’ll be able to choose to accept the mission, tell them they’re on their own, or hang up to end the episode. In a post-credit scene a mysterious figure will have retrieved the body of Thanos, and the screen fades out while looking at Thanos’ face.

In an alternate playthrough from RabidRetroSpectGames, it shows some of the decisions that carried over from the previous episodes.

If in the last episode you chose to go back to the town instead of going camping, during the flashback sequence with Peter’s mom, they will be in the hospital instead of at the camp site.

During the final showdown you’ll have a choice to either destroy the Kree or allow Bal-Dinn take control of the Kree armada.

A final decision will allow Bal-Dinn to either take his mother into custody or have the Nova Corps take Hala into custody.

The ending here is drastically different than if you chose to destroy the Eternity Forge.

In a rather interesting twist, you can choose to wipe out the entire Kree race by reviving the Celestial using the Eternity Forge, and it will destroy all the Kree.

In response, Bal-Dinn will become an arch-nemesis of the Guardians of the galaxy.

If the Forge is used to resurrect the Celestial head, you will have one more charge left in the Eternity Forge.

You will have a choice to either restore Drax’s family, Lylla for Rocket, or Peter’s mother. 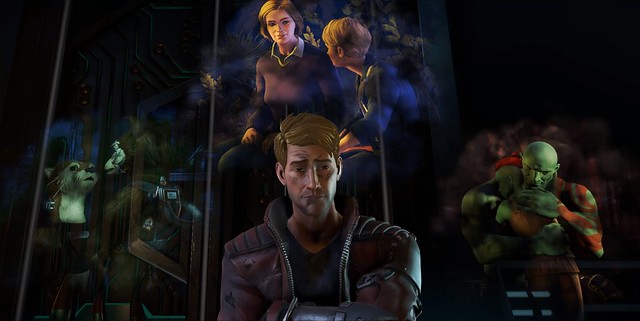 Depending on what you choose will determine who will be come back to life, which is drastically different from the alternative route where the Eternity Forge is destroyed.

You can choose who to bring back using the Eternity Forge, as demonstrated in the video below from XCV.