Netflix revealed the casting for more of the characters in the upcoming The Witcher series being headed up by Lauren S. Hissrich, who eventually had to take a break from Twitter after courting unnecessary drama with the original casting call for the show seeking a “BAME Ciri”.

Okay, you got us: The enigmatic sorceress Yennefer will be played by Anya Chalotra. Then there’s Ciri. From the court at Cintra: Queen Calanthe is Jodhi May. Fledgling sorceress Fringilla is played by Mimi Ndiweni. pic.twitter.com/0njcnyKTk2

As you can see in the main image above, there’s a pretty stark difference between Fringilla and Mimi Ndiweni.

All hope lost for the The Witcher Netflix series, this in no way resembles Fringilla Vigo, who is a woman from Toussaint. #boycottnetflix #witchernetflix #Witcher pic.twitter.com/wrLL0O9DSS

Obviously, this casting choice did not go over well with many fans, who were quick to respond to the casting news on videos like the one from LastKnownMeal. The Youtube channel broke down the cast of characters and gave some insight into the backgrounds of the actors and actresses for the show.

As pointed out in the video, Ndiweni comes from an acting background in stage plays, so it wasn’t a casting choice based on Hollywood clout, box office presence, or popularity.

Yennefer was also race swapped, with Anya Chalotra, another stage actress with a few TV credits in Wanderlust and The ABC Murders, plucked to play the raven-haired beauty.

Anya may be from the U.K., but the 22-year-old of Indian descent was criticized for looking nothing like Yennefer. You can see the comparison below between Yennefer on the left and Anya on the right. 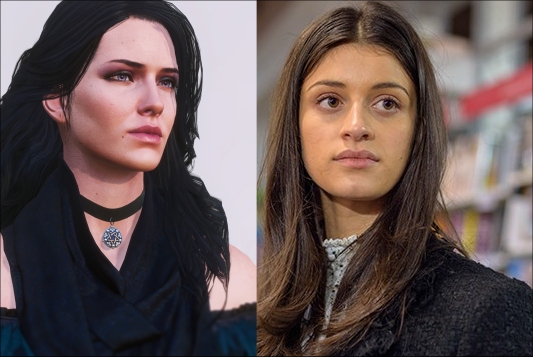 There were also criticisms of Anya being too young to play a love interest opposite of Henry Cavill, who will be playing Geralt of Rivia.

The fans have responded positively to one of the more concerning aspects of the casting: Ciri.

With the original casting call going out for a black, Asian, or minority to play as Ciri, many fans were relieved to find that 17-year-old actress Freya Allen from Oxfordshire – who has had small bit parts in shows like Into The Badlands – would be playing the snow-haired, emerald-eyed monster-hunter-in-training. As pointed out by Express.co.uk, Allen doesn’t have much of a television or movie resume to her name, so this could be a make-it-or-break-it moment for the relative neophyte.

(Thanks for the news tip Rala Cloft)