Curve Digital and Fallen Tree Games announced American Fugitive back in March of this year. The game looks like it could end up being an interesting throwback to a time where games were made to be fun. It’s an isometric, open-world crime-thriller where players have to evade the law, avoid dangerous encounters, and attempt to clear the name of a fugitive on the run who was framed for a murder he didn’t commit.

Recently IGN managed to get some hands-on time with the game, which is set to launch in the second half of 2019 for the Nintendo Switch, the PS4, and the Xbox One.

Surprisingly the previewer actually seemed knowledgeable about video games, and noted that American Fugitive is reminiscent of the old Nintendo DS title, GTA: Chinatown Wars, which came out a decade ago. The 10-minute playthrough gives you a look at some of the vehicular transports, the combat, and attempting to evade the law.

So at the start of the video the player pulls out a gun, shoots a police officer, takes his clothes, steals his car and then makes a daring getaway, only to hunt down another vehicle of interest, which involves running the car off the road, killing the driver and trashing the car.

The AI isn’t that great, and they seem to move in very predictable lines while hunting you down on foot with nary the presence of tactical prowess or skill. The cops seem to drive after you in a convincing fashion, but once they get out of the car, things devolve real quick into retard territory.

On the upside we do get to see how freeform the game is. You can steal any vehicle you see, whether it’s driving or parked. One of the neat things is that depending on what you have in the inventory depends on how you can hijack a car. So if you have a billy club you can knock out the window of a vehicle and steal it, but you would be doing so at the risk of setting off the alarm, which would attract more police to your location.

We also see that it’s possible to commandeer certain vehicles using tow-trucks, which allows you to lift a vehicle without alerting the local authorities. 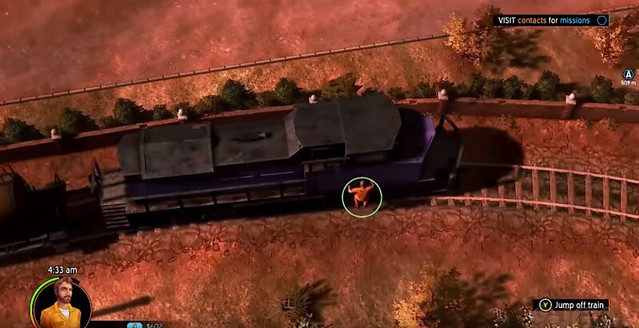 The physics are pretty decent for a lower budget game. The environmental destruction is fairly on point, albeit it comes at the expense of frame-rate hiccups, which hopefully will be optimized and fixed before release.

One thing worth noting is that the game gives you plenty of freedom in how you complete a mission. You can take disguises to blend into a crowd or trick the police, and you also have the ability to drag bodies around, ala Hitman.

There appears to be an ample variety of weapons to use, and the combat is at least on-point when fisticuffs are thrown. As many people in the comment section pointed out, the game feels like a cross between the first two GTA games and Hatred, with a dash of Postal. Set during rural 1980s middle-America is a nice touch as well, given that it completely separates itself from all the other games out there. The easy-listening country music is also a huge departure from all the gangster-rap that we’ve had to endure in games in recent years.

You can look for American Fugitive to launch later this year for PC, PS4, Nintendo Switch, and Xbox One.