Anime News Network filed a copyright DMCA strike against YouTuber Hero Hei. The copyright strike was against a live-stream video that Hero Hei did breaking down an hour long interview that Anime News Network conducted with voice actor Vic Mignogna from back in 2013, where things got a little heated over Mignogna’s belief that Left-wing media have been purposefully targeting Christian entertainers.

Hero Hei explained the situation initially in a video posted up on May 2nd, 2019 where he breaks down which video was hit with the strike, and his inability to live-stream for the next 90 days unless an appeal can be made and the strike removed.

The strike was allegedly linked to Anime News Network CEO, Christophe Macdonald, who posted a tweet back on April 25th, 2019 claiming that he had filed his first copyright strike and that the person he filed it against would likely “make some noise” about it. It’s not verified if this was the claim against Hei’s video, but many suspect that it is.

I filed my first YouTube copyright claim today. Pretty sure the person I filed it against is gonna make some noise about it. Can’t wait.

Hero Hei did have the copyright strike appealed in order to remove the DMCA claim against his channel, and he did so with the help of Minnesota lawyer Nick Rekieta.

The reason Rekieta helped Hero Hei was because if you file a counter claim when you get hit with a DMCA strike you have to fill out all the information and that includes revealing your real name and home address. Rekieta believed that Anime News Network did this either as an attempt to escalate the culture wars involving the #IstandWithVic people or as a way to to demonetize Hero Hei to limit his coverage of the situation. 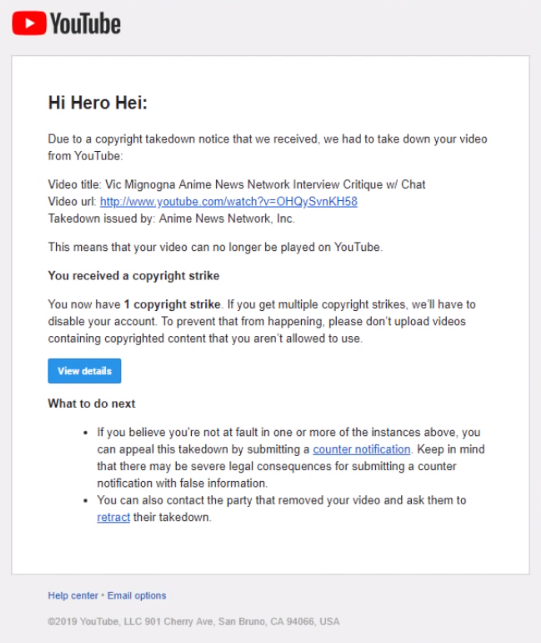 One last theory that was floated around as to why Anime News Network issued the copyright claim is that they did so in order to force Hero Hei to dox himself, since the DMCA would have required Hero Hei to put all of his public information out there to counter the claim. However, thanks to Rekieta that wasn’t going to happen.

They discuss the situation at the 44 minute mark in the video below.

Rekieta points out that the video that Anime News Network struck could be regarded as fair use or regarded as transformative use, since the original interview clocked in at around a total of an hour and 27 minutes while Hero Hei’s video clocked in at two hours and 18 minutes, according to an April 25th, 2019 archive of Hero Hei’s account before the video was nuked.

The live-stream was based on an old interview that Anime News Network conducted with Vic Mignogna from back in 2013.

The point of interest starts around the 44 minute mark in the interview, where the discussion with Mignogna begins to revolve around his faith, fundamentalism, and the perception that certain sociopolitical views can be expressed publicly while others can’t.

Things get heated and Mignogna begins to question why certain people within the entertainment industry are allowed to espouse specific views (typically those that align with Left-wing politics) and don’t face as much backlash from the media compared to when someone comes out as Christian.

The four minute exchange from the hour long interview was uploaded onto YouTube by Senpaishome, which you can check out below.

Theories were floated around that the attack on Mignogna was coordinated and motivated by people who didn’t like the fact that he was openly Christian.

Cody Baier from Anime Outsider talked more in-depth about the attacks being levied against Mignogna for his Christian faith when he was a guest on the Nick Rekieta live-stream back on March 11th, 2019, as reported by Bounding Into Comics.

Now some believe that Hero Hei being hit with a copyright strike was a way to reduce the financial income for those regularly covering the Mignogna situation. Others think that this is the #KickVic agitators trying to disrupt the ranks of people who have been supporting Vic.

For those of you who don’t know, MarzGurl – the one who started the #KickVic campaign – recently announced that she is raising funds for legal fees, as she’s been specifically targeting another Vic Mignogna supporter and YouTuber: YellowFlash.

MarzGurl made a Facebook post that was later leaked to the public where she attempted to rally her supporters to essentially doxx YellowFlash so that he could be sued for defamation. This led to people attempting to track down YellowFlash’s real life location. 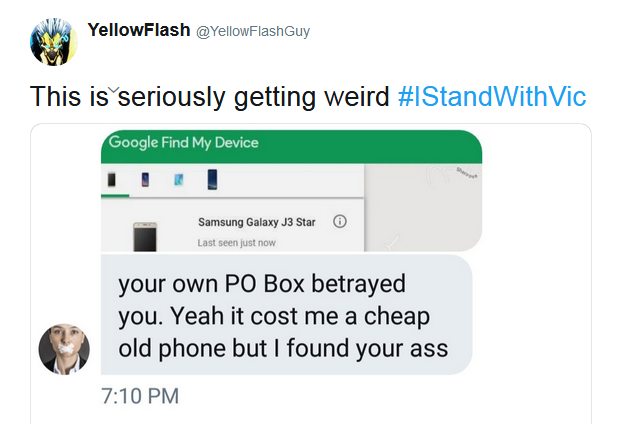 MarzGurl also opened up a GoFundme for the aforementioned legal fees, and she received support and help from other voice actors, such as Dragon Ball’s Sean Schemmel, who voices Goku, and D.C. Douglas, who voiced characters from Persona, Resident Evil and Sekiro: Shadows Die Twice, to name but a few.

On April 30th, 2019, D.C Douglas tweeted out the GoFundme for MarzGurl.

The beauty of all these sock puppets and aholes commenting here is that it forces the twitter algorithm to push this post to top and be seen by many more. She’s already doubled her initial goal. They are the best at self-owning.

Sean Schemmel followed up by retweeting the GoFundme page to his followers as well on April 30th, 2019.

So what does this have to do with Hero Hei? Well, MarzGurl doesn’t specifically name the individuals that she plans to file the defamation suit against, but she does mention that it involves “several individuals”. Specifically she writes…

“I will keep this as straightforward as possible to prevent any form of misunderstanding. This campaign is specifically for the base amount that is necessary for me to retain the legal services necessary for me to begin the process of a defamation suit. The defamation is against me by several individuals who have targeted me specifically to be the recipient of harassment in multiple forms. For over three months I have become the target of these individuals for standing with those who have accused a certain figure in the voice acting industry for sexual misconduct. As a result, several individuals have used their platforms to launch a concentrated campaign of character assassination against myself, including the telling of many untruths, and monetarily profiting off of my image without my express permission.”

Now according to ThatUmbrellaGuy, MarzGurl’s GoFundme was also being promoted by Anime News Network’s editorial director, Zac Bertschy. He tweeted out her GoFundme on March 2nd, 2019. The tweet was archived and featured in a video by ThatUmbrellaGuy.

So to put all of this together in a neat little package: some believe that this is a coordinated effort from the #KickVic group to de-platform those who stand with Vic Mignogna or at least stand against the false allegations that have been leveled against him. And since Anime News Network was vehemently aligned with the #KickVic side, one might assume that the copyright strike may have been done for the express purpose that Rekieta shopped: they were hoping to doxx Hero Hei so that he could be named in the defamation suit by MarzGurl. Barring that, he would lose streaming revenue for 90 days from his main channel.

Some believe that this is a last ditch effort from the group to attack the figureheads of #IstandWithVic, which would limit the potential reach of news concerning what’s happening with the lawsuit that Vic Mignogna filed against Funimation, Monical Rial, and Jaimie Marchi.

Technically if Hero Hei and YellowFlash weren’t able to cover the news as consistently or as aggressively as they usual do, it would inhibit the exposure and reach of the lawsuit, and in turn it could affect the amount of people who might otherwise contribute to Vic Mignogna’s GoFundme.

Of course, we’ll find out exactly what Anime News Network has planned over the course of the next ten days as they either choose to either drop the claim against Hero Hei or pursue the matter in court. As Rekieta mentioned, it would get very ugly for Anime News Network very quickly, since there’s already precedence for a case like this involving a transformative YouTube video where the verdict fell in favor of the content creator. So Anime News Network would be fighting an uphill battle in this case.

Then again… given that the outlet didn’t mind misusing images and making certain claims on behalf of anime fans that turned out to be untrue, anything is possible.

(Thanks for the news tips Iswear12 and Animatic)