[Update 6/11/2019:] Beenox updated the gaming audience by revealing that the Trophy Girls will make a return to the game as playable characters during the first season of the post-launch Grand Prix content starting July 3rd, 2019.

[Original article:] Beenox is working on the new and improved remake of Crash Team Racing Nitro-Fueled for the PlayStation 4, the Xbox One, and the Nintendo Switch. The game is due out on June 21st, 2019. It will feature many of the popular characters from the Crash Bandicoot universe along with all new graphics, visual effects, and improvements over the Crash Team Racing formula… except for the trophy girls.

You might notice that in the recent video previews for Crash Team Racing Nitro-Fueled that have been making their way around YouTube that there’s a lot of similarities with the original racing game on the fifth and sixth-gen consoles. However, the victories – while revamped with all new victory poses for each character and different poses for different skins that players can unlock for the characters – won’t feature the trophy girl.

You can see an example of the new victory sequence where you win a trophy with the timestamp below.

There’s also a second trophy sequence at the 19:30 mark and so far no trophy girls.

This was something that a lot of gamers noticed, especially since the trophy girls in the previous Crash Team Racing were always present and greeted players with a wave at the end of each and every race. For those of you who don’t remember, there’s a video from YouTuber Castcoder.

As you can see, the trophy girls were unmistakable and impossible to miss. In fact, this was one of the top topics on the comment page of the Beenox walkthrough of the new features in Crash Team Racing Nitro-Fueled.

A lot of people were asking where the trophy girls went? Most responded by blaming Social Justice Warriors. 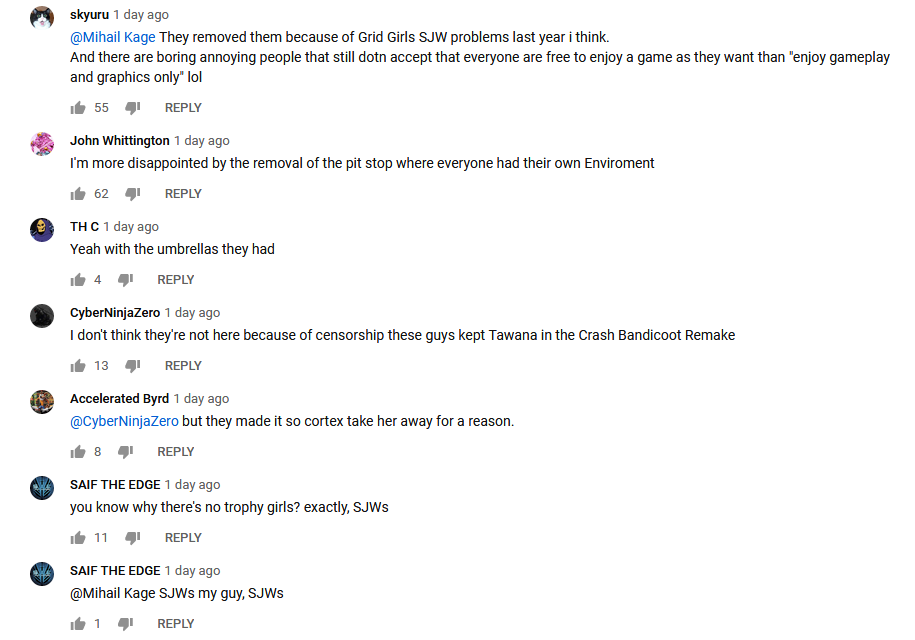 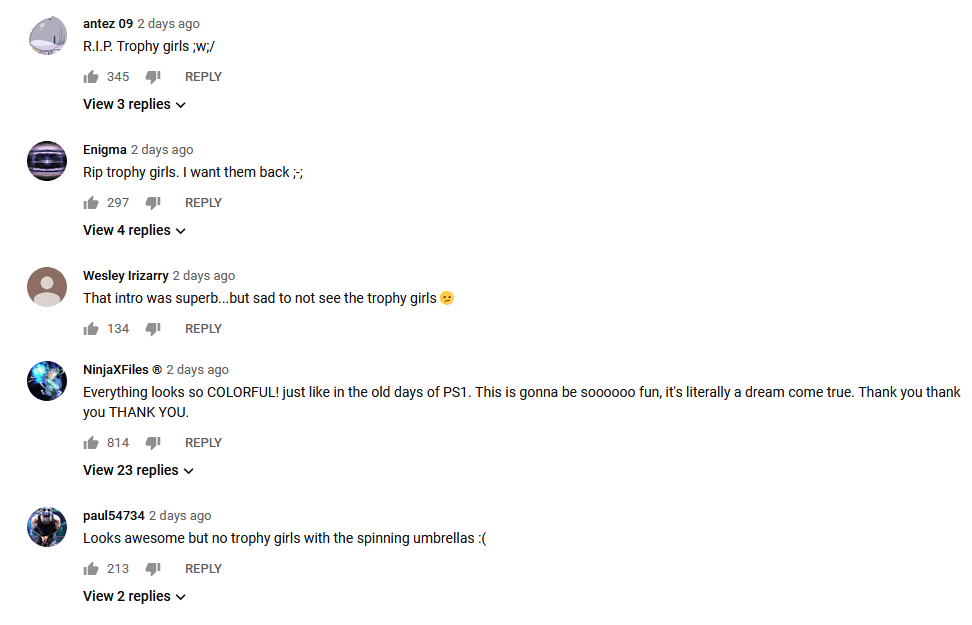 What they mention about the SJWs and grid girls possibly being a reason isn’t a far fetched theory. Social Justice Warriors did campaign to put professional dart girl models out of work, along with pressuring the Formula One organization to fire all the grid girls. They also had car manufacturers to fire all the booth babes following complaints from feminists.

Male feminists even went so far as to argue with the unemployed models, telling them that it was for their own good because their work was demeaning.

Yes, feminists are so unhinged and crazy that they would rather people be poor, destitute, and out of work than to be objectified.

Let that sink in a for a moment.

Whether that kind of sociopolitical nonsense is what compelled Beenox to remove the trophy girls is just fans throwing around theories for now. It’s possible that Beenox removed the trophy girls to comply with Sony’s censorship policies, which seems like the more likely scenario. But then again since the game is multiplatform and appearing on Xbox One and Nintendo Switch, would Sony really muscle in on a third-party game to match parity with the censored PS4 version? Again, it’s a theory shopped around but no proof that parity clauses are in play… for now.

What we do know is that while a lot of features are making a return and a ton of new content is being added to the game, trophy girls aren’t one of them.

(Thanks for the news tips Plake Filmmaker and Animatic)