YouTube outlet Geeks + Gamers was one of several YouTube outlets hit with a copyright claim that blocked their video worldwide for criticizing a deleted scene from Captain Marvel.

Jeremy from Geeks + Gamers let people know about the copyright claim that Disney sent out recently via a tweet that was published on May 30th, 2019.

Thank you for proving my point correct once again. Protect Queen Brie at all costs pic.twitter.com/WIR7TUugLH

As indicated in the tweet, you can clearly see that Disney claimed the video titled “Brave and Courageous – Captain Marvel Takes Down The Male Patriarchy”. 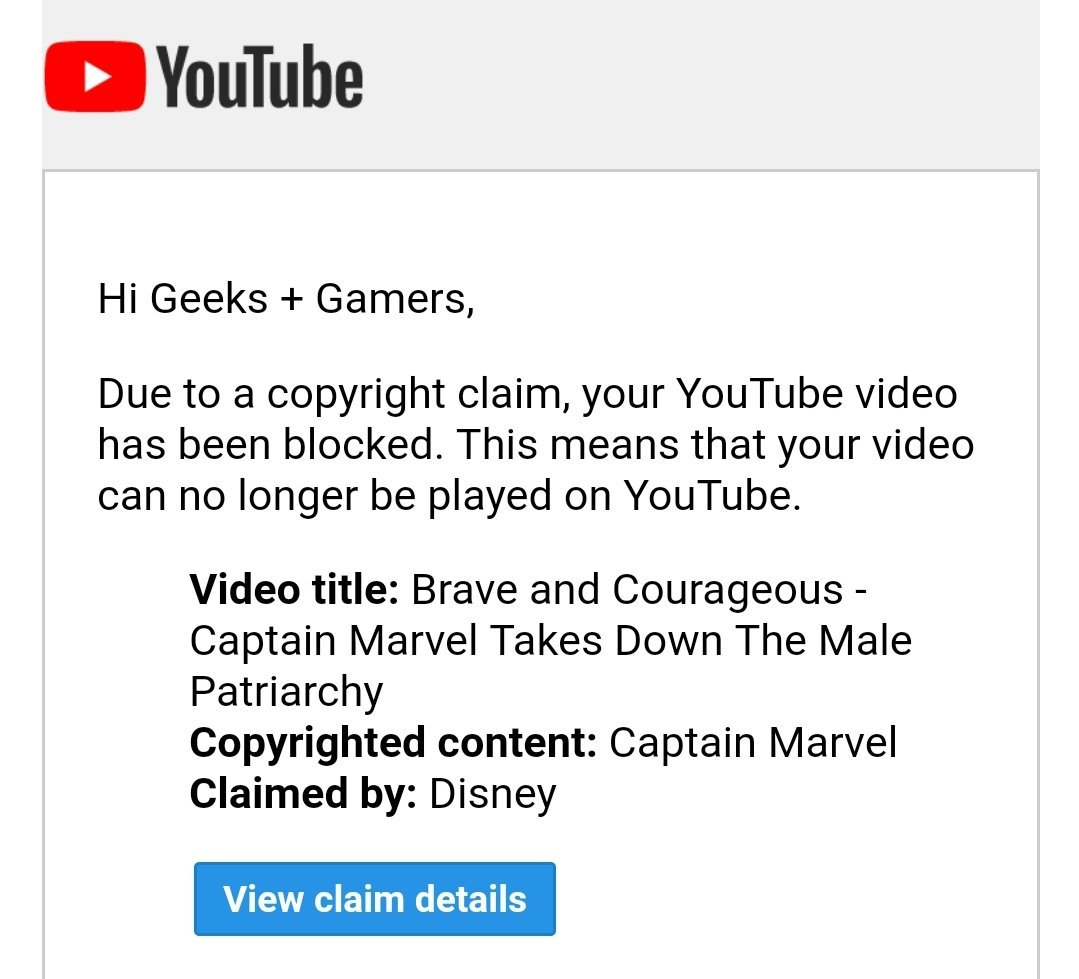 The original video was criticizing a deleted scene from Captain Marvel. You can see what the original clip was courtesy of Furious Trailers.

Even though Geeks + Gamers’ video was copyright blocked worldwide, Jeremy still criticized the scene again in a follow-up video detailing the video being blocked.

In fact, he points out that he wasn’t the only YouTuber that got hit with a claim. Various other YouTubers, including female YouTubers, were also copyright blocked by Disney after criticizing the Captain Marvel deleted scene.

This was corroborated by various other YouTubers, including Julie, who sarcastically tweeted out about Disney removing the video from her channel related to the deleted scene from Captain Marvel.

I figured it out Disney just want our Cloths, Our boots and Our fake opinions ?? but no we will only give you our honest opinion’s Disney #Disney #freespeech what about free speech? Honesty? No you just want fakery. That’s a great business u got @thatstarwarsgrl @DDayCobra

Both Julie and That Star Wars Girl decided to further discuss the censorship in a livestream over on YouTube.

There’s a livestream of the discussion that you can check out below.

Now some people might jump to the defense of Disney, claiming “They’re only copyright claiming videos using the clips wholesale!” but if that were the case then Furious Trailers’ upload should have been blocked as well, since it’s an upload of the clip without any commentary.

Disney is specifically targeting people who are negatively criticizing Captain Marvel on YouTube as a way to squelch the impressions of the scene that goes against their agenda. Various denizens of the net have been mocking and ridiculing Brie Larson and Disney for their misandrist approach to the Captain Marvel character all while censoring criticisms at every turn.

She can take down the patriarchy, but needs to be protected from it. #PROTECTQUEENBRIE pic.twitter.com/b0ZkPfzac0

Anyway, this has been an ongoing issue with all things Captain Marvel. Previously YouTube had filtered the results for Brie Larson in order to suppress a lot of the videos criticizing her anti-white male rhetoric, and then there was the issue of Rotten Tomatoes trying to white knight for the Captain Marvel film by removing negative comments.

Disney has been intent on trying to push her to the forefront of their hero branding, but if they keep censoring opposition while anchoring the character on agitprop, the only thing they’ll do is continue to push people away.

(Thanks for the news tip Mugen Tenshin)