One of the most popular G.I. Joe characters is the armor-clad ninja, Snake Eyes. He’s typically been an American who was trained as a ninja since childhood, sporting blonde hair and fair skin. While the cartoons never showed his face, we were typically treated to small glimpses of his skin or hair during intense combat sequences, letting us know he was a blonde-haired American. Well, his American heritage is being retconned and now he’s being race-swapped for the upcoming spin-off movie themed around the silent ninja.

According to the Hollywood Reporter, the star of Crazy Rich Asians, Henry Golding, has reportedly landed the lead role as Snake Eyes.

The spin-off is supposed to be the launch-pad for a soft/hard reboot of Paramount’s G.I. Joe live-action films, which originally featured two outings, one starring Channing Tatum and Marlon Wayans, and the other starring The Rock and Bruce Willis.

As many of you know, Snake Eyes in the previous two films was played by Ray Park of Darth Maul fame. We never saw his face as an adult, but they did show that he was an auburn-haired, straight white male as a child.

However, Left-wing media propagandists are already cheering about the news, claiming the race-swap as a victory lap for diversity”, which typically translates to replacing roles typically donned by white actors with POCs.

As pointed out by Inverse…

“Casting an Asian actor (Golding is British-Malaysian) to portray Snake Eyes feels like a serious course-correction that feels long overdue. It’s also just kinda funny, because why cover up Henry Golding’s face? Then again, 20th Century Fox had no problem burning Ryan Reynolds’ mug for Deadpool, and those films have grossed an insane amount of money. Perhaps similar success could follow Golding into the untitled Snake Eyes movie.”

Given that Snake Eyes doesn’t speak and we don’t see his face, I have no idea how they consider this is a win when Henry Golding won’t be talking and you won’t be seeing him? Unless they retcon the character some more and make him speak, and have him taking off his helmet a lot, sort of like the Judge Dredd film starring Sylvester Stallone. 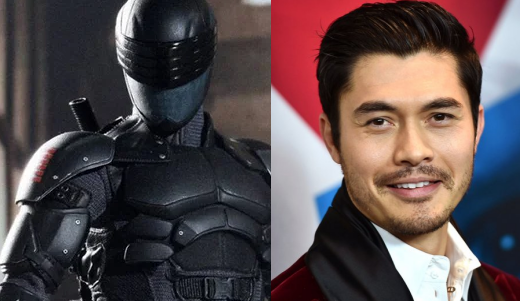 Alternatively, this could be a swerve by Paramount, and maybe Golding is actually being cast as the Asian ninja, Storm Shadow?

In today’s Clown World that’s obviously hoping for too much.

[Update:] According to Bounding Into Comics, the original creator of Snake Eyes, Larry Hama, chimed in on the potential casting of Golding as the iconic ninja, issue a statement that was picked up by Hisstank, where he said…

“Some people are saying that casting Golding “fixes” the character of Snake-Eyes, but I disagree. I had wanted to keep him ambiguous until HASBRO introduced Storm-shadow as the only Asian character and made him a bad guy. I decided to “fix” that by delving into his background and gradually turning him into a good guy. This is why Snake-Eyes is a white guy.”

Bounding Into Comics also links to a video from Clownfish TV, who shared images of Snake Eyes from the original comic book run where they showed that he did indeed have blonde hair and blue eyes.

Anyway, the casting of Golding hasn’t been confirmed yet by Paramount. So there is still a sliver of hope that he may not be Snake Eyes and the race-swap is misdirection, but if they do confirm the news – and unfortunately The Hollywood Reporter is rarely ever wrong with their news reports – then it means yet another race-swap has occurred, and another franchise has fallen.

(Thanks for the news tip giftofgab247)