[Update: 12/3/2019] Bandai Namco has made the Revenant bath towel available in the character customizer for those in the West with Code Vein update version 1.12.

[Original article:] Bandai Namco’s Code Vein has been a breath of fresh air for some gamers, derivative for others, and boring for a few more. One thing almost everyone can agree on is that the game is chock full of fan-service, including a special pre-order bonus DLC pack featuring a hot springs bath towel. The only problem is that some gamers found out that certain regions were allowed access to the towel as part of the character creation process, while others weren’t.

It started with some threads on the Steam forums back on September 28th, 2019, when Steam user Phi Zero asked if there was additional DLC because he was seeing people accessing a bath towel costume and additional stamp sets.

Now, originally the bath towel was included as a pre-order bonus and your character could appear in the hot springs area wearing the bath towel, as demonstrated in the clip from Giuseppe Nelva from back in June of 2018.

According to Steam user Yuki Bajhiri, they contacted Bandai Namco about it and was informed that the DLC featuring the bath towel was only available to Japan and Asia-region versions of Code Vein…

“My friend received the “Japan-exclusive” DLC, but he bought the game the same exact way I did, in the same region (NA) as me on Steam. Not sure how and why they were able to get the DLC but I wasn’t. Also, I submitted a ticket to see if Bamco had any explanation, and the response I got was:

“’To help clarify the situation, we would like you to know that the Bath Towel DLC costume is an exclusive DLC acquired only in Japan/Asia. NA/EU users cannot acquire this DLC.

“We hope that this information has helped in clarifying your concern. Should you have any other questions in the future, please do not hesitate to contact us again.’”

What further confused gamers was that the revenant bath towel was featured in certain videos made by content creators doing Let’s Plays of Code Vein, such as CohhCarnage, who received the stamps and costumes after he booted up the game.

CohhCarnage obviously wasn’t playing the Asia/Japan version of Code Vein, which left a lot of gamers still scratching their heads.

This led some gamers to believe that Bandai Namco sent out codes to select reviewers and content creators that contained the revenant bath towel costume, but normal customers weren’t given access to the same content. 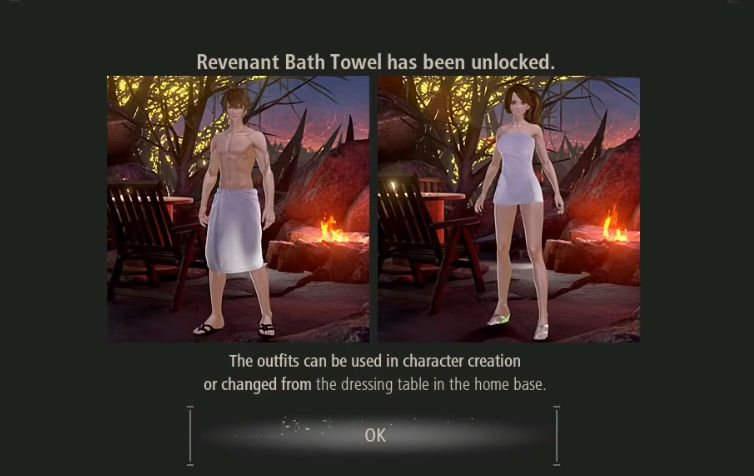 As pointed out in a Code Vein Reddit thread, you can access the costume only when you go to the hot springs, but in a separate thread a user pointed out that his friend was able to access the costume during character creation outside of the hot springs area. In yet another thread, others asked if the revenant bath towel would possibly release as a costume in future DLC.

Bandai was criticized for restricting the DLC to specific regions, since it looks like region-based censorship from the customers’ point of view.

This is how they will censor now. Just move all the “controversial” stuff to DLC or a preorder bonus, and just not release it in your region at all.

Off the wishlist Code Vein goes.https://t.co/arIhi0oYHK

This isn’t even the first time we’ve seen Bandai Namco do this. They region-restricted the hot springs DLC mission for One Piece: World Seeker to the Asia/Japan version of the game, while Western gamers were left out of the loop.

So far Bandai Namco hasn’t made any public statements about the revenant bath towel being made available for everyone. I did reach out to Bandai Namco to ask for clarification about the bath towel costume, and if they choose to respond the article will be updated with their response.

(Thanks for the news tip Raging Golden Eagle)