[Update:] Hours after this article was published, the official Azur Lane Twitter account informed the wider audience that Hisasi’s loading screen artwork is now back in the game after they claimed that they mistakenly synched the update with the other servers.

During yesterday’s hotfix, we accidentally synchronized the loading screen with other server. The problem is now fixed, please restart the game to download the latest patch in game. We are deeply sorry for the confusion we have brought.#AzurLane #Yostar pic.twitter.com/XSMihp9bMA

[Original article:] The loading screen art featuring Belfast and Azuma from Japanese artist Hisasi has been removed from Yostar’s Azur Lane. This time, however, it’s not just the removal from the English version of the game, but from the Japanese and Chinese versions as well.

As usual, the removal was spotted by a Reddit user, but the mods were quick to close the thread claiming that it wasn’t censorship on behalf of the English localizers. The mod’s condescending post also acknowledges that the art has been removed from the Japanese and Chinese versions of Azur Lane as well.

Before the thread was closed, users Dimbreath and Rangin Aswati shared the information that the loading screen was removed from both the Chinese and Japanese versions of the game.

An image of the file list was uploaded so you can see that the asset name for Hisasi’s loading screen, which was located under the filename Bg_4 (standing for background 4), was replaced with completely different art.

As pointed out by Dimbreath, the background was changed during a hot fix patch between version 3.1.87 and 3.1.90.

Some users suspect that it may relate to the tweet made by the official English Twitter account for Azur Lane that hinted at fixing some “image resources”, which wasn’t properly clarified but some hint that it may be related to Hisasi’s artwork.

A few people did ask them about why the artwork was added and then quickly pulled during the hot fix.

If you were unsure what the actual artwork looks like, you can view the full image below. 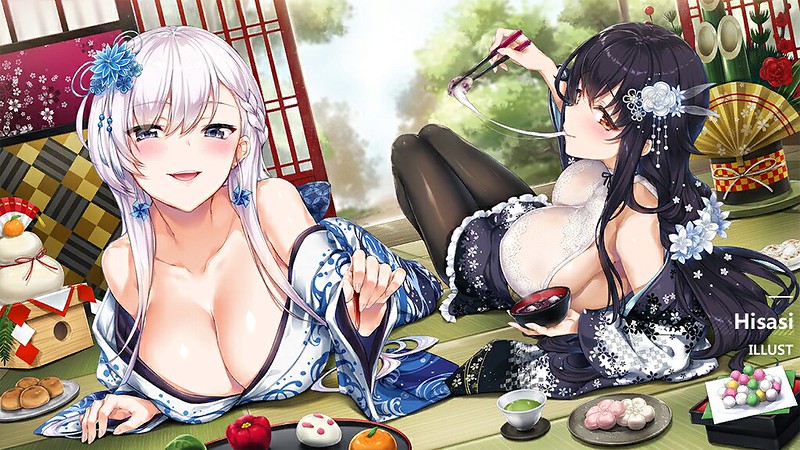 As you can see, it’s no more or less risque than the rest of the loading screens in the game. However, since the art was removed from the Chinese and Japanese versions, along with the English version, we can rule out that it was due to the English localization team. However, this does not discount that some censorship skullduggery could still be afoot, especially since the team has been found to engage in censorship in the past for less than scrupulous reasons.

Others suspect that perhaps Hisasi became incensed for some reason and asked for his artwork to be pulled.

A few suspect that maybe the rotation for the art was wrong and a mistake was made.

Unfortunately we won’t receive an official statement about the matter until December 30th, 2019 on Monday.

[Update:] We can rule out that Hisasi didn’t want his artwork in the game. In a tweet published during the time of the article being published, Hisasi revealed that the artwork was intended as a celebration of the new year, and even though it was removed from the game he shared it on Twitter.

(Thanks for the news tips Anachronistic Phylactery, Prince Villasor and substratose)