Piracy has always been a contentious issue for entertainment industries, especially those beholden to investors who know less about market dynamics than those who sit in management. In one camp of companies you have those that understand the basic nature of the market. That while some people prefer fan translations or are too poor to otherwise support the official release. These people turn out to watch the anime, they occasionally buy the merchandise and even when they don’t, they serve as free advertisement through word of mouth and passionate posts across social media that draw in people who then do spend money on the IP.

In an opposing camp you have companies like Viz Media who believe if they crush all piracy sites then they will convert every pirate into a customer. This belief persists despite several studies saying piracy does not impact sales negatively, but can boost sales and market reach if your product is good, as reported by Ars Technica. Along with basic economics of how you cannot count a potential sale as a lost sale.

Personally, after tolerating delays in the physical printings of official localizations only to find the content altered because it offended the sensibilities of the localizers I was done with official translations. I’m not paying good money for altered products. It also didn’t help that most properties I’m interested in are not large enough to warrant the interest of large western companies, so websites like Mangadex have been an invaluable source for Manga viewing.

Most Japanese companies tend to take a very lenient approach to piracy that doesn’t aim to profit off their intellectual property. Understanding that they gain more revenue from the free word of mouth and merchandise sales than they ever would from shutting these sites down and having their properties be mostly ignored by western audiences.

Viz Media – a corporation headquarted in San Francisco – doesn’t share this sentiment and has taken to persecuting fan translation hosting sites. After a user uploaded an official release of Boruto they hired Evan Stone to sue Cloudflare for Mangadex’s owner’s information according to Torrent Freak.

Never mind that uploading official localizations is against site wide rules nor how Mangadex has complied with all requests to remove officially released series much to the denigration of their reputation with their audience over how they went about doing so. Viz Media has no interest in resolving the issue amicably or civilly with the site’s administration. 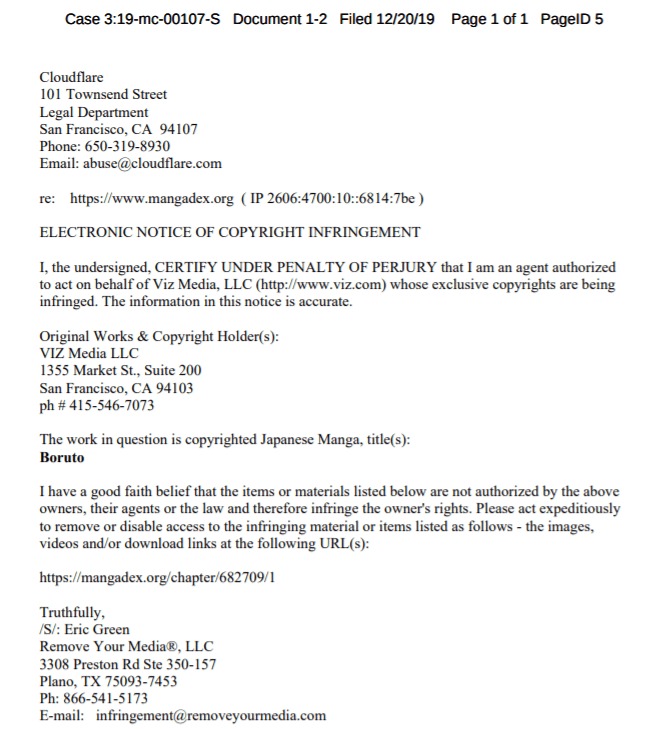 As a side note, I never understood why companies don’t just ask the fan translation websites to link to the official store to promote the merchandise being sold or host advertisements for limited run merchandise? They could even do a timed release window and drive eager fans to the official digital store fronts by simply limiting what chapters can be released at what time. Most sites would be very welcoming to helping support the content creators in this manner, yet no company seems terribly interested in reaching out to do so. It is either a passive tolerance of piracy or crush the rebel scum mentality that comes from corporations.

Setting aside how these matters could be better handled for the benefit of everyone involved, the legal pressure caused Mangadex’s hosting company to drop them suddenly. As a result the website has spent the last few days migrating to a new website and now an official announcement from https://mangadex.cc/thread/200708 Mangadex has clarified the situation.

Good news, everyone! As you can see, MangaDex is back.

A few things to note:

1. Our .cc domain is temporary for now. Our .org domain was acquired via our reseller, who has removed us from CF and have stopped supporting us due to legal pressure. .org will be unavailable until the transfer to our new provider completes.

2. Due to the length of time it takes to move the domain, older chapters aren’t available just yet. It will probably be the beginning of next week before they’re available but we’re hoping the move will complete before the weekend is over. You can, however, upload new chapters, comment on old chapters, etc., etc.

3. Following the termination of our reseller’s support and handling of our donations, the existing donation method is no longer a viable option. Active supporters will have been sent an email about this. We are currently looking into alternative methods of support. With ads as a last resort.

4. To anyone paying attention to the news, the Boruto chapter in question was an official English rip. Uploading official chapters has always been against our rules, and we’d appreciate your continued assistance in reporting any content that breaks our rules in the future. Thanks to all our users for staying vigilant and reporting all official sources, early releases, troll chapters and all other content that breaks our rules.

5. Note that since we’re on a new domain, reader settings are back to default. Apologies for the inconvenience.

6. The login-only access is a temporary measure while the cache rebuilds. We haven’t gone user-only. Guests now have access to MD.

Thank you for being patient with us and for your outpouring of support during this time. Believe me, even staff has gotten a little twitchy without manga to read.

As we have moved to a new provider, you may experience issues. If you see any errors, please report it on our Discord.

When dealing with the issue of piracy companies should proceed with caution. Without a doubt they have a right to protect their intellectual property, but when a site like Mangadex already forbids releasing official translations and has demonstrate a willingness to comply with companies wishes to operating legally to further harass them only breed’s animosity amongst consumers.