Lazy Bear Games and tinyBuild’s Punch Club has become a challenging beloved title for a lot of mobile and PC gamers. Some gamers have had a tough time getting their feet grounded in a decent way to play and progress in the title without losing really badly. Well, there’s a way to play through the game and get to the end following some basic steps when it comes to training, working, eating and winning the fights.

YouTuber RPG TCG offers a walkthrough on how to earn some cash, train up and beat the crap ou tof guys. You can check out the completely walkthrough below.

After you go through the basic tutorial at the beginning where you do some push-ups, eat some food and go to work, you’ll need to fight some thugs that will result in a loss. You can change skills by scrolling through the ones available in the skill list at the bottom of the menu before a fight starts.

RPG TCG works until around $135 is earned. Stock up on steaks with the money. Proceed to train and sign up for the rookie league at the gym along with spending $10 to use the gym equipment..

Head home and train until you get your three main bars of Strength, Stamina and Agility, half way up. Proceed to sleep until your energy is fully restored and then head to the gym and train up your agility, strength and stamina to level 2 by working out on the tire, the punching bag, the weights and the speed bag. You should be able to get the Stamina up to level 3 by jump roping a bit. Proceed to enter your first fight, which you should be able to win pretty easily.

Once you win the fight the two skills you need to unlock next are “Block” and “Dodge”. These are essential for winning fights in the future.

And just for reference, Strength increases your damage – the higher the level of your Strength the more damage you’ll output. Agility increases your accuracy and the ability to dodge opponent attacks. Stamina determines how well you can absorb attacks and regenerate your energy. 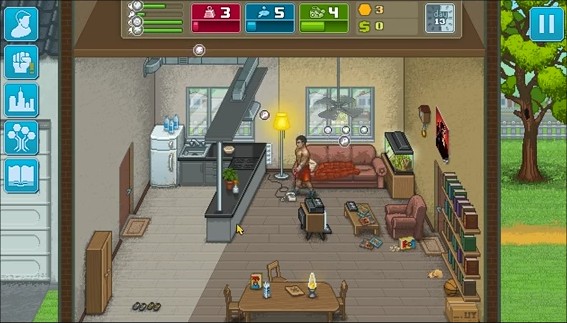 Different skill sets affect the three main stats. Dodging and kicking will quickly drain your Strength and will less effective if you utilize those skills while having a high strength stat. Training up Agility will grant you better dodging and countering abilities, along with better efficiency with kicks – however, high-impact Strength moves will work against skills that rely on Agility. And finally, Stamina is all about tanking hits. If you want a granite jaw and an iron chin then focus on Stamina – you’re basically turning into Rocky Balboa if you go with Stamina, but you will lose efficiency if you try to focus on dodging or kicking if you want to level up this particular stat.

Spend the next day after the fight doing push-ups, eating a steak and sleeping to replenish your abilities. Head back to the construction yard to work to gain some money so you can buy some food. You might encounter a thug or two while attempting to buy food. If your Agility isn’t very high then don’t worry about equipping the block or dodge skills, just stick with punches and kicks in the early part of the game.

You’ll have the option of becoming a pizza deliver boy, but in the video it’s easier to just head home and level up your Stamina to level 3 after grabbing some steaks from the store. You’ll get another fight, which shouldn’t be too hard to win with just punches and kicks.

You’ll need to replenish your supplies so gain another $135 or so dollars and stock up on steaks and then rest and proceed to train at the gym so you can level up your Strength, Agility or Stamina to level 3 or 4, depending on what you want to focus on.

The main goal is just to rinse and repeat the light workouts while eating steaks, working at the construction yard, stocking up on more steaks, and then hitting the gym a few days before your next fight. You can keep rinsing and repeating this method to get your bearings and hit the ground running. 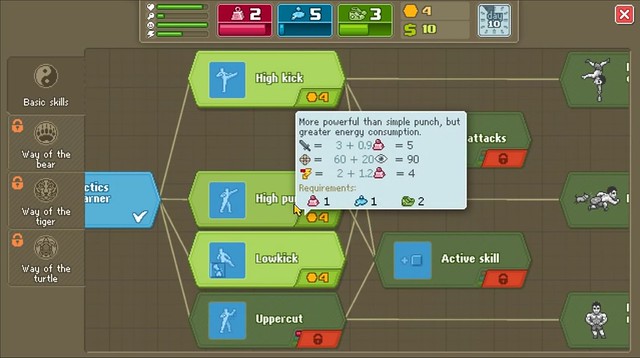 After you win the fight you’ll be able to open up a whole new range of fighting moves after you meet Tyler Durden in the back of a bar and he teaches you some street fighting moves. Depending on the kind of fighter you want to build will determine what kind of moves you’ll want to add to your repertoire.

If you participate in the Fight Club street fights they can quickly zap your food, so make sure you have plenty of steaks stocked up. There’s also the Ultimate Underground Fights as well, which are as much a risk as they are a reward.

The game offers you plenty of options for building the kind of fighter you want. If you need help later into the game after you break your leg, you can check out the video starting at part 10.

There are 35 videos in total covering Punch Club from start to finish, including the game’s admitted lackluster ending. Nevertheless, it’s important to keep in mind that the game is not easy, not by a long shot. It will require perpetually stat micromanagement and constant balancing to maintain your fighter’s fighting integrity and stat prestige.

It’s easy to lose the flow of getting stronger when dealing with the monetary and food issues. However, keep in mind that even as you get stronger maintain the constant balance of restocking food when you need it and leveling up at the gym in between big fights so that you grow consistently. Also, don’t be afraid to use small workout methods in between work, eating and fights just to keep your stats stacked, since it’s possible to lose stats by sleeping too much or working too much.

You can pick up a digital copy of Punch Club right now for mobile devices or for PC via Steam. For more info on the game you can learn more by visiting the official website.