Activision and Infinity Ward tried to do something different with the zombies mode in Call of Duty: Infinite Warfare for PC, PS4 and Xbox One. They decided to go retro with a 1980s theme for the first-person Zombies In Spaceland mode, and if you need help activating the Pack-a-Punch, finding the Easter Eggs and unlocking some of the secrets, there’s a walkthrough for the new zombie mode.

The game mode is actually fiction within fiction. There appears to be an possible ongoing story linked with the fictional movie director Willard Wyler who transports four teenagers back into the 1980s for the Zombies In Spaceland adventure. You can check out the intro below, courtesy of MrDalekJD.

Now that you got the basic intro out of the way, a lot of people want to know how to get their hands on the Pack-a-Punch machine so they can upgrade their weapons to pack a much bigger punch.

There’s a basic tutorial on how to turn on the Pack-a-Punch machine. There’s a two part process in opening up the machine, which first includes turning on the power in the zombie-filled amusement park, and secondly it involves going through four portals.

The first portal will be activated and you’ll need to activate the control panel next to the portal to walk through it. It’ll light up above the portal, showing you four lights – you’ll need to turn each light blue.

The next power generator lever is past the Cosmic Cinema after you go through the first portal. You’ll need to head to your right, and go through the building where the second portal is. Around the corner from the portal, on the left hand side, the lever for the power generator will be there. Press ‘X’ (or Square if you’re playing on PlayStation) to activate the switch.

Activate the portal with the control panel by the portal.

Head down to Polar Peak, and head up to the cross-section and head to your left. Proceed through the open door next to the amusement ride and there’s another power generator switch there. Activate the switch and then you’ll find the portal on the bottom floor, just below the balcony where you flipped the switch on.

The last portal is through the Kepler System to the left of the main portal spawn. Head inside and the switch is fairly close by along with the portal. Head inside and when you get back to the main portal there will be an option to teleport to the Projection Room by holding down Square (or ‘X’ if you’re playing on Xbox). Once you head into the Projection Room the Pack-a-Punch machine is the projector itself.

There’s a timer inside the Projector Room so you’ll only have a limited amount of time to pack a punch into your guns before it teleports you back to the main square.

If you want to upgrade your weapons to have special elemental effects, you can do so by heading back into the Projector Room and hold down Square (or ‘X’ if you’re on Xbox) on the drones sitting on the table in the farthest left-hand corner of the room. The drones will float into the air and fly through the portal. You’ll need to then go and find the drones to activate their elemental effects for the Pack-a-Punch machine.

You’ll need to head to a ticket stand and purchase an Arcane Core for 300 tickets. 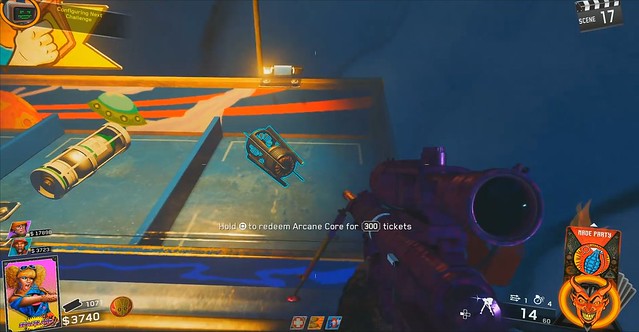 It equips to the front of the weapon and you’ll need to find the drone of your choice that’s by a stage trap and then activate the trap when zombies get close to it. It’ll need to suck up about 25 zombies and put their souls into the drone.

When the drone is full it’ll begin to fly around the stage. You’ll need to kill zombies while walking underneath the drone and killing them with a weapon that’s already been Pack-a-Punched using the Arcane Core. You can see what you need to do with the video tutorial below.

You can also get the robot N3il to help you out during the zombie escapades. In order to get N3il on your side, you’ll need to first complete the challenge objectives, such as getting a number of multi-kills. You’ll get the tickets from completing the challenges and use it to activate N3il, who will fly off into space and come back down with Hollywood star David Hasselhoff, who will then help you out for a bit by killing zombies for a few rounds.

YouTuber MrRoflWaffles explains the process in detail along with showcasing a video on how to activate the robot and unlock the new set of challenges.

There’s another set of challenges that includes gathering items for N3il after Hasselhoff leaves. The first challenge is to find a battery. After doing so Neil will fly back up into the air and then come back with Hasselhoff, who will aid you during the round. Once he’s done, N3il will fly back up into space with Hasselhoff and then back down and offer you another challenge, this time to restore his OS by finding a floppy disk.

If you complete all three challenges (getting N3il’s head, his battery and a floppy disk) you’ll be rewarded with a new option: the ability to summon David Hasselhoff at any time by paying $5,000. The harder the round, the longer The Hoff will stick around, so be sure to save up and use it when you need it. Also, once you unlock the ability to pay to summon The Hoff, you will be able to summon him at any time so long as you have $5,000.

If you need help going through the entire Easter Egg hunt, NoahJ456 takes you through each of the steps leading up to the giant boss fight against the alien UFO.

The alien boss fight takes place just a half hour into the video below. You can see the tactics he uses to defeat the alien boss and how to avoid being curb stomped.