Netflix released an iOS and Android adventure game for mobile devices based on their hit streaming series Stranger Things. The game is developed by BonusXP and is a mix of Earthbound meets Zombies Ate My Neighbors with a mixture of Jurassic Park from the SNES. If you have the game and you need a bit of help getting through some of the puzzles and areas, there’s a complete gameplay walkthrough guide available.

YouTuber Bullets uploaded a walkthrough of the game over on their channel, featuring the various chapters, strating with Chapter 1: The Lost Boys.

The game kicks off with Hopper in his home. He’s given a mission about the Byer boy going missing around the lab.

Head outside after receiving the phone call and talk to the cop. Get in the car and go to the station. Interact with the door and then talk to the cop to get the keycard so you can enter the lab.

Examine the items around the room, and open the green chest in the top right hand corner of the screen. Take the keycard inside the chest and use it to open the door.

In the next room you’ll need to beat up some of the lab security guards and punch the switch to open the door to access the next room.

Inside the guard room is a green chest with a green keycard inside; take it.

There’s a switch to the left in the first column; flip the switch to deactivate the laser on the far right column and then flip the next switch so you can get to the green chest with the keycard inside.

The puzzles are very similar to The Legend of Zelda: A Link to the Past

Head back down where the locked door to the left is located and use the keycard to open it. Go inside and flip the switches to get to the next side and then proceed up into the next room where you’ll face off against a muscly man. You can’t beat him so turn off the laser grid, punch him – it’ll inform you that he’s immune – attempt to lure him after you and then turn on the laser grid to kill him. 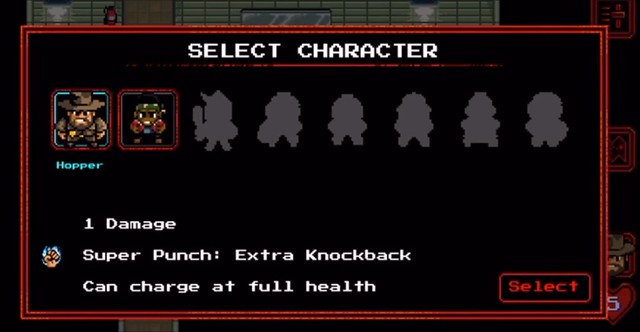 In the room up above you’ll encounter Lucas, who has a wrist sling for a ranged attack. You can use this to also flip switches at a distance that you couldn’t reach with Hopper.

Go back through the lab and to the room where there was a switch located between some floorboards you cannot reach by foot. Use Lucas to fire his sling at the switch to open the door to your right.

Go inside and kill all the guards and pick up some rock ammo for Lucas.

Head into the next room with the muscle-man and use the sling to kite him to your position. Turn on the laser grid to kill him.

In the next room there’s a man with a gun; shoot him before he shoots you. In the room below that there’s a series of laser grids. You’ll need to turn the lasers on and off to at the appropriate time in order get past the room.

Venture into the room below, kill the guard and take the green keycard.

Also, there’s a blue button in the room; hit the button to deactivate the blue laser.

Head all the way back into the hallway just to the left of the room with the multi-colored laser grid. Continue to proceed to your left and into the area where there’s a switch that opens a door. Inside the room you’ll find the red button. Hit it to deactivate the red laser grid. You’ll find the yellow switch to the north of where the blue switch is located. It’s in a locked room – use the keycard you got from the guard in the blue switch room to open the door. Proceed all the way back to the main concourse where the multi-colored laser grid is located. You’ll need to fight the evil scientist.

Deactivate the laser grids and then smack him with a rock.

When the scientist activates the deflection shield, switch back to Hopper and get close and punch him in the face like a real man. Once the scientist is defeated you’ll need to head north to track down Steve the douche bag.

Head outside and deactivate the grid and continue north through the forest.

Kill the stupid owls that fly down from the trees like illegal immigrants swooping down to get on welfare.

Head up into the small shack to get the set of keys. Take them to the house where Joyce is located and give Joyce the keychain.

Go into the bedroom and take the romance novel with the busty lady and the hunk on the cover. Exit the house and keep beating the crap out of owls like the police were beating up old ladies at the voting booths in Catalonia.

Follow the road up north to Steve, who is loitering around like the douche bag that he is. Steve will inform you that Nancy went into the woods. So head right into the woods. 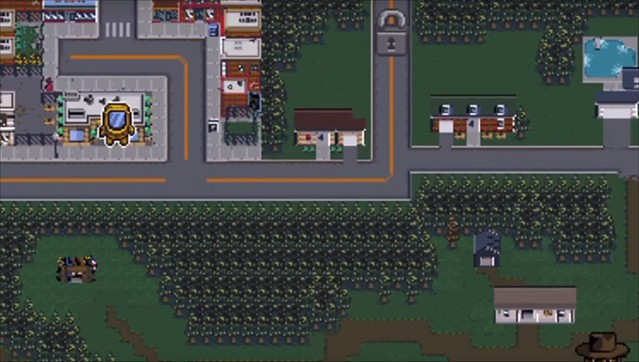 Head to the morgue and use Lucas to flip the switch using his slingshot.

Go inside and grab the hazmat suit.

Head back to the entrance of the Upside Down and proceed inside. This will end Chapter 1 and start Chapter 2: The Gate.

Once inside, punch the explosive pods toward the tentacles and then wait for them to explode.

When you get into the forest area, you’ll need to shoot down the beehive to lure the black bear out of its area. While the bear is eating the bees, shoot the other beehive (using Lucas) to the right of the broken log blocking your path. This will cause the bear to run through the log blocking the path and eat the honey from the hive, providing you a passageway through to the next area.

Head south and open the green chest to retrieve the green keycard and then head north to open the gate.

Head left and you’ll need to activate a switch in order to open the two gates. 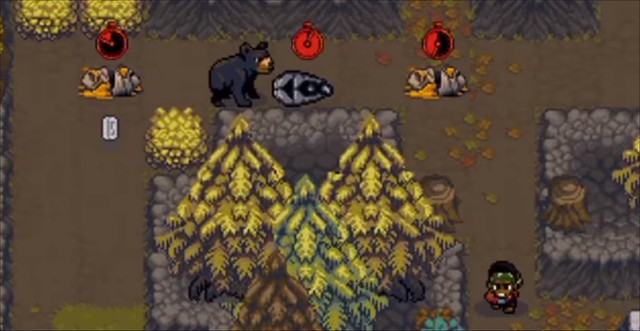 Head over to the far left before you proceed in order to open up the green box and retrieve the keycard.

Then head up in to the next segment and proceed to your left and through the gate past the guards to retrieve one of eight of the VHS tapes.

In the screen with the bear and the next gate switch, shoot the bear trap using Lucas, then shoot the first beehive to attract the bear, proceed to shoot the next beehive above the log blocking the pathway to create a route to get to the switch so you can open up the second gate.

Travel into the next section and defeat the enemies, including the owls and the guards. Keep moving through the area, traveling north, to uncover another chest with a green card inside. The next switch is located back down and through an area where there are two routes – one route has a bear up top near a switch and the other route has a bear trap below. You need to flip the switch to open the gate, and then quickly use Lucas to shoot each of the traps to pave a way for the bear in order to get to the honey.

Flip the switch once you’re done to open up the next gate.

You’ll then be able to proceed into the next segment where the forest ambushers are located. 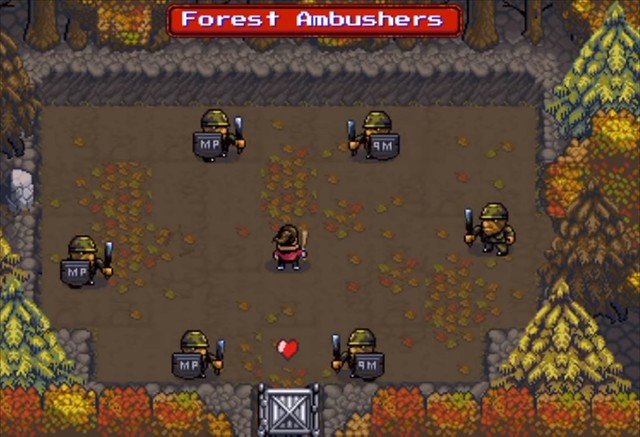 Avoid the attacks until one of the ambushers begins to flash. Proceed to attack the ambusher who flashes and beat the crap out of him with Nancy’s club.

Once the ambush is dealt with, you’ll need to leave the forest maze and track down Mike.

Proceed back through the Upside Down and exit the gate. If you give the UV filter to the photographer you’ll get a backpack to increase your items.