Ubisoft’s Far Cry New Dawn for Xbox One, PS4, and PC could have been a far more interesting game than what it was. The villains aren’t particularly interesting and the gameplay is just more of the same recycled content that most gamers have become accustomed to in an open-world Ubisoft game. Nevertheless, for those of you curious about the story and the ending, this guide here will give you a brief rundown of the game’s ending.

Small colonies sprout up like daisies befriending dew during the spring cycle, and settlements manage to establish food and resources to sustain the people spread across Hope County. Life persists.

That is, until the Highwaymen show up. 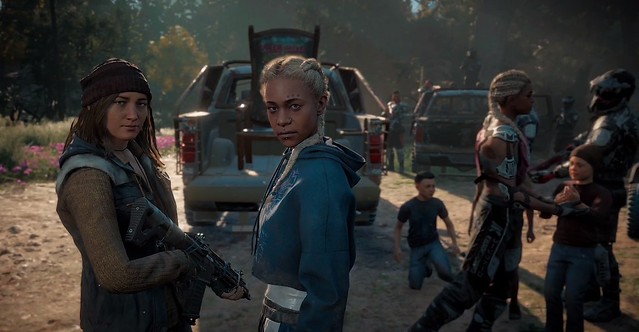 Led by the ghetto black duo of Mickey and Lou, known across the region as The Twins, the Highwaymen proceed to loot, pillage, and plunder the settlements around Hope County.

Carmina Rye, the daughter of Nicholas Rye – the helicopter pilot from Fary Cry 5 – and his wife Kim Rye, is tasked with finding a group of liberators led by Thomas Rush. Carmina manages to reach Rush and convince him and his two top lieutenants, Garrett Barnes and The Captain, to head to Hope County to free it from the Highwaymen.

Rush puts together a locomotive convoy full of armed soldiers and supplies, and makes his way to Hope County. Only, during the trip to Montana, the Highwaymen laid a trap and derailed the train, forcing a large portion of the soldiers to die in the crash, while the rest were rounded up and killed.

The Twins manage to capture Barnes, Rush, and The Captain, and during a scuffle they kill Barnes while The Captain is pushed off a cliff into the river below. 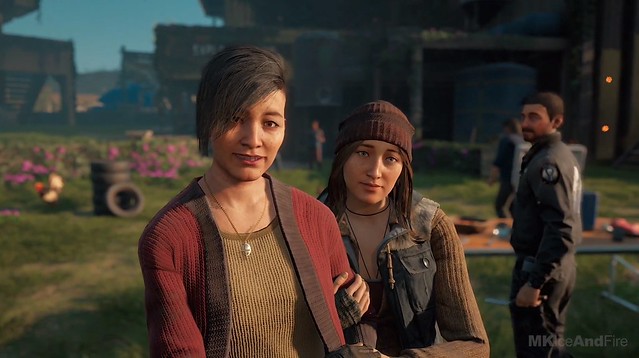 Carmina manages to save The Captain, and introduces him to a small resistance group on the outskirts of Hope County in a makeshift settlement known as Prosperity.

With the help of Carmina’s mother, a French pilot named Roger Cadoret, and a few stragglers, The Captain manages to use guerrilla tactics to mount stealthy attacks against the Highwaymen operations after rescuing Thomas Rush. They disrupt the Highwaymen supplies and eventually free a few heroes including Nana the sharpshooter, Selene the doctor, Nick Rye the mechanic, and Grace Armstrong, the latter of whom has gone blind but somehow has become a weaponsmith who helps the group.

Just as The Captain and Rush manage to rebuild Prosperity and accrue a sizable militia, Mickey and Lou attack Prosperity with a moderate force after The Captain reneges on their offer to leave Hope County.

With Prosperity crippled, Thomas Rush devises a plan to recruit the remaining members of New Eden to help fight against the Highwaymen, much to the chagrin of the people of Prosperity. The Captain and a few others travel up north into the New Eden compound where they meet Joseph Seed, the true savior from Far Cry 5.

The Captain follows the clues left behind by Seed and encounters The Judge, formerly known as Deputy Rook, who then takes him to Ethan Seed, Joseph’s son.

The Captain is set to complete tasks for Ethan before he can visit Joseph. However, Ethan has plans to usurp power from Joseph.

With New Eden as allies, The Judge joins The Captain, and they proceed to liberate Hope County from The Twins.

The Captain goes to rescue Rush, but gets captured by Mickey and Lou. The Twins proceed to put a shotgun to Rush’s head and pull the trigger, blowing his skull to pieces.

The Captain breaks free from the handcuffs and proceeds to physically destroy Lou’s face until he gets shot in the chest by Mickey and blasted out the window.

The Captain manages to survive thanks to the fruit he ate that Joseph Seed gave him, which increased his strength and durability, since it was mixed with Bliss.

The manager of a Mad Max-style derby event named Irwin ends up teaming up with The Captain to hatch a plan to finally take out the Twins during a derby event. However, the plan is foiled when it’s discovered that The Twins have struck a deal with Ethan Seed. Ethan promises to give The Twins access to the sacred fruit if they burn down New Eden. 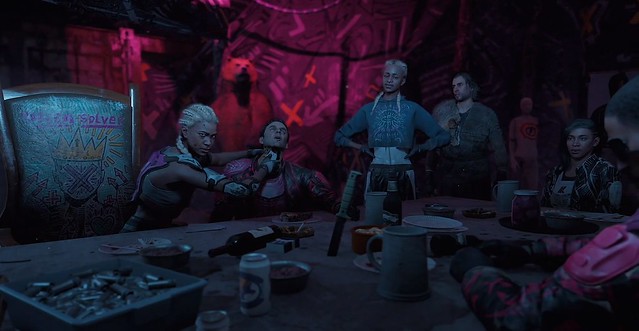 The Captain races to New Eden, which is already set ablaze by the Twins.

During the fiery shootout, The Captain and The Judge manage to take down The Twins, ending with Lou dying in a bloodbath.

Mickey is fatally wounded, but confesses that she should have listened to her mother instead of followed in the footsteps of her murderous, bike-riding father.

The Captain is then left with the choice of letting Mickey live or finishing her off.

Before she dies, Mickey tells the resistance fighters that Ethan has gone after Joseph Seed.

The Captain treks up the mountain to where Joseph and Ethan are located. Against the wishes of Joseph, Ethan eats the forbidden fruit and transforms into a black monsters, prompting for a final battle to take place between Ethan’s darkened soul and The Captain.

Ethan is killed during the battle.

Joseph sets his son’s body ablaze along with the tree of Eden, proclaiming that he was not the shepherd to leave the people to salvation, but The Captain was.

In a final bid for freedom from a life of violence and anguish, Joseph acts The Captain to “release him” from the suffering.

If The Captain refuses to kill Joseph, the former leaden of Eden’s Gate is left atop the mountainside near the burning tree, begging God to release him from the suffering after his family is left in ashes and New Eden has been turned to dust.

Far Cry 5 is set in Montana, but Far Cry 6 will be set in the state of Hawaii. It’s looking to bring back some of the stuff that made Far Cry 3 & 4 great, which this author feels are sorely missed in 5. The game is slated for release in Fall 2018. You take on a character whose name isn’t

TL;DR: After the apocalypse people begin to rebuild Hope County. A group of bandits known as the Highwaymen, led by two black twins named Mickey and Lou, arrive and begin to take over the settlements by force. The survivors seek help from a resistance leader named Thomas Rush and his group of liberators headed up by Garrett Barnes and The Captain.

However Rush and Barnes are killed, leaving it up to The Captain to liberate Hope County with the help of an old adversary to the residents of the county, Joseph Seed and his New Eden cult. New Eden, however, is betrayed by Joseph’s son, Ethan, who became angry that he was not allowed to take control of New Eden. Nevertheless, Ethan, the Highwaymen and The Twins are defeated by The Captain and the resistance members. With his family dead and the cult in disarray, Joseph Seed asks The Captain to end his life, leaving players with the choice to finally kill Joseph Seed or let him live out the rest of his life, suffering in agony from the loss of everything he held dear in life.