Russian developer Ice-Pick Lodge and publisher tinyBuild managed to find a niche audience to take interest in their first-person psychological horror game, Pathologic 2 for the Xbox One, PS4, and on Steam for PC. For gamers interested in the title but may need a little help completing some of the segments, there is actually a gameplay walkthrough available.

YouTuber RabidRetrospectGames put together a seven and a half hour walkthrough covering Pathologic 2 from start to finish. You can check it out below.

The game starts in the middle of the story. It begins with your character in the theater after a performance.

You’ll need to go talk to Mark Immortell in the other room where you can talk to him about your performance.

After talking to Immortell the screen will fade out and you’ll appear on stage. Hop off the stage and go talk to the Bachelor.

Head upstairs and talk to the Executor and then head back downstairs and exit through the double doors cast in red light.

Make your way outside

Proceed through the camp and out through the gates where you’ll see a soldier have a Molotov cocktail thrown on him and some civilians get shot. Keep heading down the street to your left.

Proceed past the soldiers to the bridge where Aspity is located and talk to her. Ask “What you’re alive?” and then select the second option and cross the bridge into the next area.

Keep walking through the streets as you see the buildings on fire and the people being exterminated.

Make your way to the cathedral and go talk to the Commander.

Tell him that you’re a doctor and that he needs to call off the bombardment because he’s a war hero. 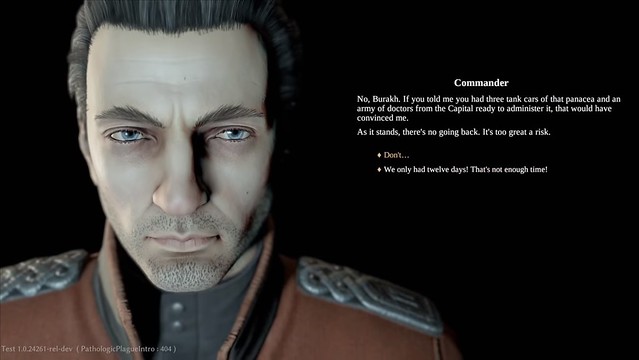 Tell him “we only had 12 days” and then talk to the Inquisitor and tell her that they need to stop the bombardments. Tell her that you know where to get the ingredient for the serum. She will attempt to have you thrown out and then Mark Immortell will appear again and you’ll get a second chance at getting out of town.

On The Way Home

This will then switch you to a train segment where a man will climb up out of a coffin.

Talk to the fellow traveler and then wait for the train to stop.

Take out your lamp and make your way through the grass toward the burning wreckage past the giant bull. Talk to the Executor and then make your way down the tracks.

You will die and then end back up inside the train. Talk to the man again about sharing secrets and then the scenario will switch to a house with rooms.

Inside the rooms there are people who will turn into black figures with white masks. Open each of the doors and look at the people until they turn into the black figures. Examine the drawer in the one room down the hall and take the flask. Head outside to the water barrel and fill up the flask with water. Head back inside and go back into the room where the girl was lying on the bed and then the traveler will wake you up. 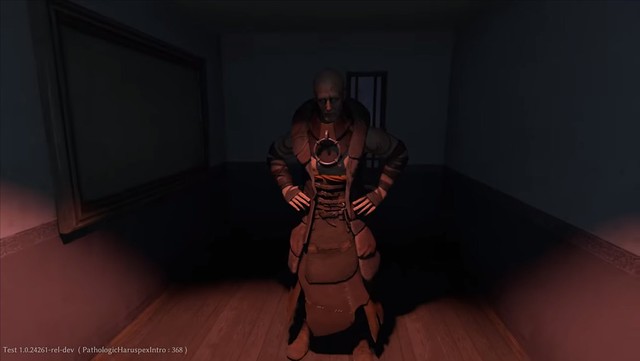 Talk to him again and the scene will switch to some nomads in a fighting circle. Talk to the man and then engage in a fight. You’ll need to learn how to fight and block. The tutorial will inform you that stamina recharges faster when you block.

Beat him up until the segment ends and he’ll give you a heart.

The segment will end.

You’ll end up in a house. Go into the house and take the meat and the water bottle from within the kitchen, along with the matches, and get the bag out of the cupboard.

In the hallway you’ll need to take the flasks and and other items before going upstairs and taking the soap out of the desk before you exit the room. 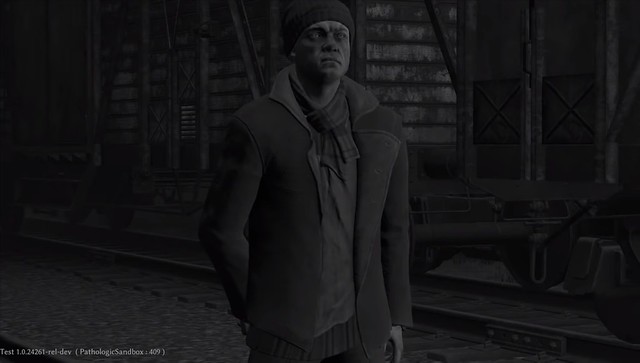 When you exit the door a cinematic will play and several men who attempted to waylay the doctor will be put down. Loot their bodies and take everything they have on them.

Talk to the various characters near the train and then make your way toward the town.

There are some items in a chest as you move into the town from the outskirts, you can take them.

Continue northwest into the warehouse where Bad Grief is located. Talk to him and then save your game at the grandfather clock behind him. He’ll give you a mission to help one of his men by healing him and retrieving whatever is in his gut. He’ll give you a rusty scalpel to do the deed.

Just outside of the barn/hut there’s a case with some scissors inside, be sure to take them.

Make your way to the Hindquarters across the bridge and talk to the NPC about the rumor that you killed men.

Proceed through the The Tanners district and go into the house where Shiner is located. Loot the marbles and items then talk to Shiner and tell him you have a scalpel. You’ll then need to interact with the body on the floor, and you will need to use the rusty scalpel and the empty flasks to do so. 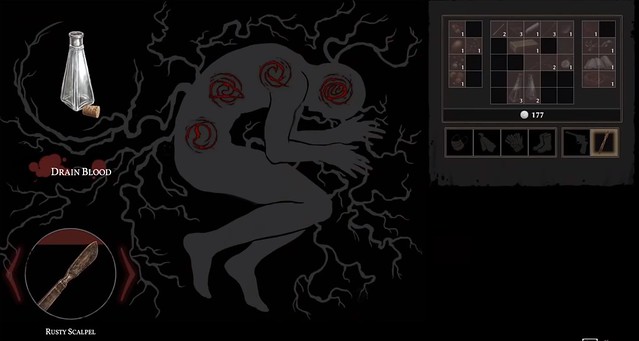 Use the scalpel on the highlighted area by his lower abdomen, otherwise the very bottom left symbol on his body. Take the shiv back to Bad Grief, which will open up your ability to trade with Bad Grief. This will also open up a new mission from Var. Ask him where he lives and he will show you wear on the map you can find his house.

If you don’t have a rusty scalpel you’ll find one inside of the house with the Bachelor. He has rusty scalpel inside one of his cabinets.

If you go by the river you can talk to the Boater who will explain to you how the ferries work.

You can also talk to a man near the Boater who will also offer you a gun for 3,000 credits. But it’s pretty expensive.

As pointed out in SulMatul’s walkthrough, if you come out of the Bachelor’s house, some kids will give you two more quests, including offering you some lockpicks if you go to visit them in their warehouse.

Talk to Notkin and you’ll be able to talk to him about the difference between murder and killing.

They will want to kill Lika, and if you say that killing is good they will attempt to kill Lika. However, if you talk to Notkin again you will learn that you can actually deal with Lika.

You’ll need to proceed to the Steppe, which is located just outside of down within the stone pillars.

Lika is on the south side of the Steppe.

If you agree to deal with Lika for Notkin, then Notkin will give you a leash to give to Lika. When you talk to Lika and he explains himself, give him the leash and then proceed back into town by the Warehouses and go back to Notkin.

Talk to him about Lika and the mission will be complete.

Make your way into the Tanners and there’s a kid named Siskin with red hair at the north part of the district who will trade you a fingernail for the scissors.

Also talk to Loy and bargain for the bull. If you give him the money he’ll deliver the bull to you later. 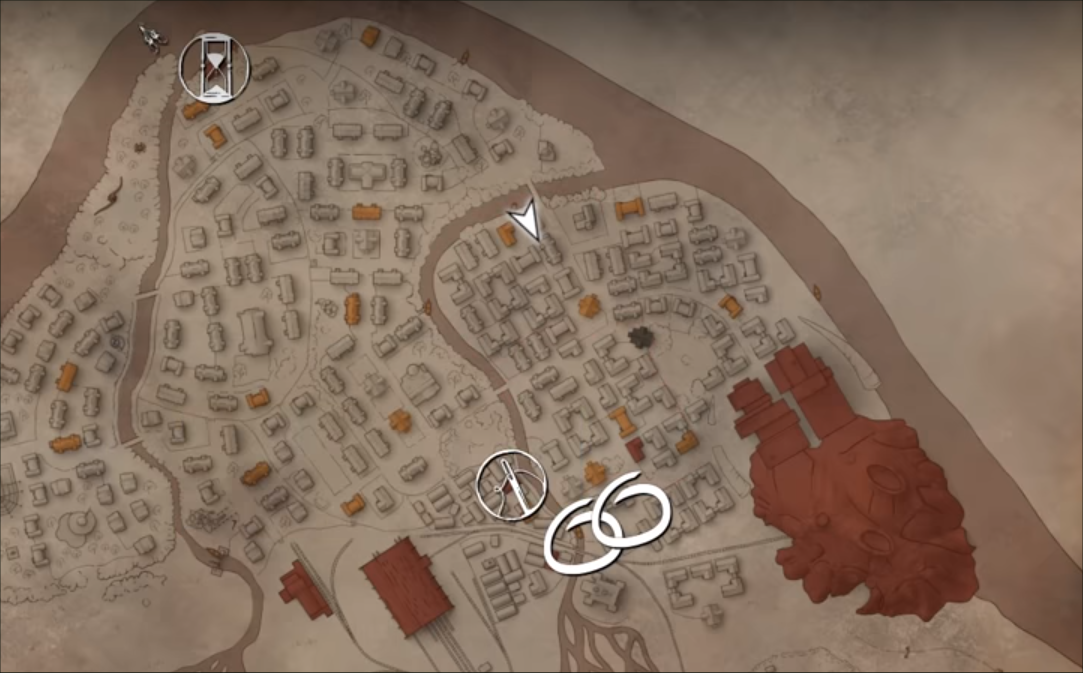 You’ll need to meet the Warm One at the northern part of the map at the top of town in the Flank district. You will be required to stand still on a patch to wait for ??? to appear. Talk to her and then she will leave. Talk to the Warm One again and then use the flask on the warm blood of the tree roots to acquire the herbs. 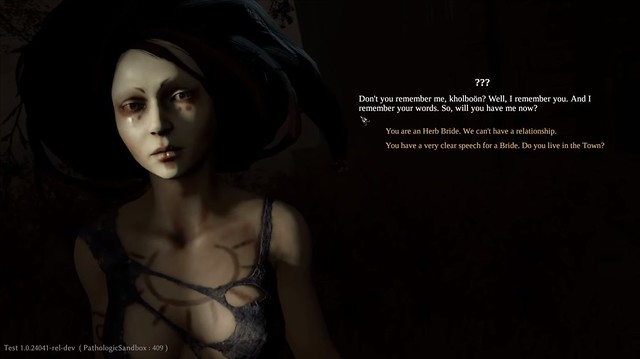 You can also talk to Lara Ravel inside the house at the top of the map. She will encourage you to sleep. After you sleep you will dream and there will be three Restless Ones in a room.

Talk to each of the Restless Ones. They will be the men that died during the fight at the train yard.

Go upstairs to address the Changeling, and she will talk to you about your fate.

When the conversation ends, go back downstairs and talk to Lara Ravel.

If you head to the police station and talk to the prison guard, he will tell you that Vlad vouched for you and cleared your name in town, claiming you to be innocent. You can then go talk to Vlad at the justice hall in The Gut.

Vlad will tell you to stay at his house and sleep at his mansion for the night.

Once you talk with Vlad everything will be set for the day. Talk to Vlad again and he will give you another quest to drink to Isidor’s memory at the Broken Heart Pub.

Make your way down into the pub, talk to Andrew Stamatin and Peter Stamatin.

Drink with Peter Stamatin and he will inform you that drinking Twyrine will allow you to see hidden in the map.

Exit the pub after drinking with Peter and take a sip of the Twyrine to reveal a new location on the map that’s a swirly icon. 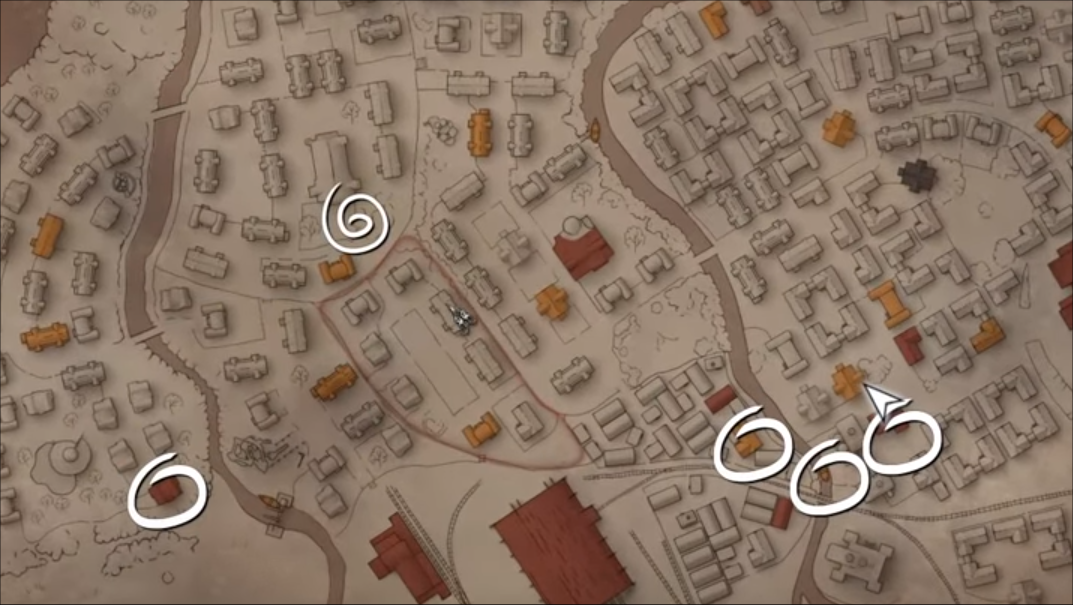 At the location there’s a chest hidden behind some objects, and inside you’ll find some supplies, along with a box of “Shmowder”.

The way the game unfolds is that there are certain events that happen during the day that cannot be repeated.

At the end of day there is a pantomime event taking place at the theater. Make your way to the theater.

Mark will be talking to Haruspex, who is on stage. Mark will tell Haruspex not to die. After the performance exit the theater.

Head to The Gut and you’ll once again meet the Fellow Traveler from the coffin in the train. Once you get done gaining your supplies you can head back to Vlad’s place to sleep.

This will put you into Day 2.

You’ll have a few more quests.

If you fought someone and killed them, you can actually harvest their organs using a scalpel. You can then take the organs to Var.