Cancel culture cultists were enraged about American Krogan’s content, as well as his interview with Edward “Jolly Heretic” Dutton – a researcher who focuses on making content themed around race realism and intelligence – and so they decided to report his channel to YouTube on the grounds that he was. This resulted in YouTube terminating American Krogan’s account.

The news comes courtesy of American Krogan, who tweeted out the notice he received from YouTube about his account being terminated on August 20th, 2019.

@brodaEINS reported my account to @TeamYouTube for last night and yes, my channel was then banned. Last night, I had received a second strike for my interview with the @jollyheretic. Then shortly after that, I got an email stating that my channel was deleted. pic.twitter.com/rENwjNQOx5

The first message was from after the outrage activists reported American Krogan’s content, which resulted in him receiving a strike and a suspension. 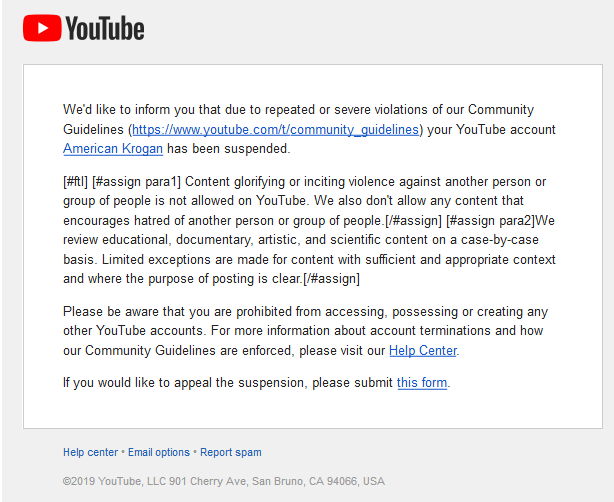 If you’re unable to read the suspension notice, it states…

“[#ftl] [#assign para1] Content glorifying or inciting violence against another person or group of people is not allowed on YouTube. We also don’t allow any content that encourages hatred of another person or group of people.[#assign] [#assign para2]We review educational, documentary, artistic, and scientific content on a case-by-case basis. Limited exceptions are made for content with sufficient and appropriate context and where the purpose of posting is clear.[#assign]

“ Please be aware that you are prohibited from accessing, possessing or creating any other YouTube accounts. For more information about account terminations and how our Community Guidelines are enforced, please visit our Help Center.”

The second notice that American Krogan received indicates that following his interview with Dutton, his channel was terminated. 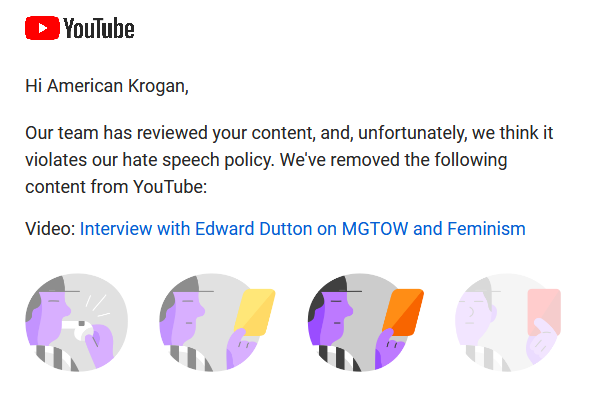 If you’re unable to read it, it states…

“Video: Interview with Edward Dutton on MGTOW and Feminism.”

This was the second strike that American Krogan received, yet somehow it resulted in an account termination.

If you attempt to visit American Krogan’s account, you’ll be met with a notice informing you that the account has been terminated due to “hate speech”.

American Krogan rightfully noted that he would be appealing the account termination, but also directed his followers to his Bitchute channel in the meantime.

I will attempt to appeal this ban. For now, I suggesst subscribing to my BitChute. https://t.co/CwrRTNSOhY

American Krogan has been in YouTube’s crosshairs for some time now, especially after he did the video about Jordan Peterson and the JQ, which resulted in YouTube putting the video behind the Limited State restriction, which prevented people from being able to search up the video, comment on it, share it, or embed it outside of YouTube.

American Krogan proceeded to upload his videos to Bitchute following YouTube attempting to clamp down on his content.

He also did a video back in July, outlining how YouTube has been targeting his account for videos containing arguments positing facts that triggered the frail hearts at the company.

YouTube terminating American Krogan’s account is pretty much expected at this point given that his content doesn’t align with YouTube’s current agenda, and the company has been on a purging spree lately to get rid a lot of content creators who engage in wrongthink. They’ve been doing so using the nebulous “hate speech” term, which essentially means anything they don’t like.

We’ll see if American Krogan will be able to get his YouTube channel back, but given YouTube’s current ideological slant, I tend to doubt that they’ll oblige his request.

(Thanks for the news tip ThyBonesConsumed)

[Update:] American Krogan attempted to appeal the ban, but YouTube rejected it.

They rejected my appeal. pic.twitter.com/yowAy2zEid