14157920cookie-checkHow To Craft A Ship In Empyrion: Galactic Survivalno
Guides

How To Craft A Ship In Empyrion: Galactic Survival

If you already have a ship and you want to use it as a base you can strip everything down and expand it as you see fit using the deconstruction tool.

YouTuber PackMan Gaming has a tutorial explaining how to manually build a ship from scratch. It’s a short video detailing the parts you need just to get started for a basic, functional ship. You can check it out below.

If you want to build a ship from scratch, you’ll need a few key components, a Vessel Starter, an RCS (Reaction Control System) for turning the ship, a cockpit for flight direction, an oxygen tank, a normal thruster and three directional thrusters. You’ll also need a gravity generator (for capital ships) or a normal generator for power, and a fuel tank for obvious reasons. If you need to make your ship look fancy you’ll need hull blocks.

After you put down the Vessel Starter, place the RCS, fuel tank, cockpit and generator on the hull blocks. You’ll also need to put six directional thrusters on the left, right, front, back, top and bottom side of the ship so you can move it in any direction.

Tango Tek walks gamers through the basic construction of a ship and how to build a ship from start. Check it out below.

If building a basic ship is too low tier for you and you want to build something bigger, you’ll need a larger cockpit control system. Opposite of the smaller ships the cockpit for a capital ship will be a control panel.

Capital ship parts are labeled as “CV” in the Constructor so those are the basic parts you’ll need to get started.

Technically you could use a basic cockpit for the capital ship to control it, but it would be better to have a capital ship control panel.

One of the more difficult things to design would be a gravity generator, which requires:
2 Control devices,
2 Motors
1 Capacitor device
3 Electronics
5 Metal components
10 Power coils 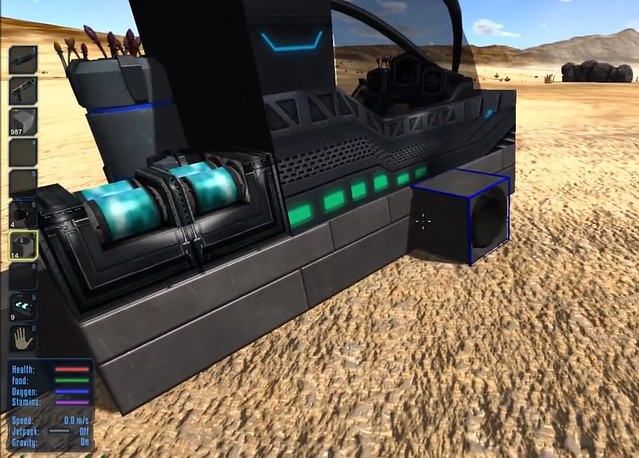 Games 4 Kickz has a walkthrough for building a capital vessel that you can check out below so you can find out exactly what parts you need to craft a ship in case you don’t already have them.

Empyrion: Galactic Survival is currently in pre-alpha on Steam’s Early Access. You can learn more about the game by paying a visit to the official website or you can check out the game’s page on the Steam store if you’re interested in picking up a digital copy.