14092103cookie-checkKing’s Quest Chapter 3: One Upon A Climb Gameplay Walkthroughno
Media

King’s Quest Chapter 3: One Upon A Climb Gameplay Walkthrough

YouTuber RabidRetroSpectGames put up a full two hour playthrough of the third chapter that you can check out below.

The first puzzle you encounter in the game is helping the owl family find their missing kid. Grab the shovel and head back to the starting screen when Graham was young. Use the shovel to dig up the mounds. Plant the acorn at the mound to the far left and the thorn to the mound on the far right. Move the gate over so it’s no longer blocking the mounds and then proceed to the final screen so the owls can be saved.

For the Triumph puzzle with him not being allowed at the table, simply take some of the peas and the turkey from the table and place it in Triumph’s bowl.

To create the fake guest, take the hat stand from over in the right hand corner by drapes and place it at the end of the table by the chair. Use the picture of the weaponsmith on the stand and you’ll need to put the peas and turkey leg in Triumph’s bowl again to get the guard to move off the purple rug to refill the peas; once he’s off the rug, grab it and place it over the hat stand.

Go back to the head of the table where there’s a small blue hat and place it on the stand.

By the time you get into the tower and can roam around while the tower walks to its next destination, be sure to grab the Pegasus book, the miniature board game and the puzzle books lying around on the floor. You’ll need to ask the two princesses where to put each book and game and they’ll point you to where to place each object.

After cleaning up various objects you’ll also need to repair some items. To get the vase just outside the forcefield, however, you’ll need to grab the halberd from within the closet and use it to wheel in the vase.

After playing clean-up simulator, you’ll need to stealthily dodge the evil witch by sneaking about the tower. Once Graham appears on-screen you’ll need to move him over out of sight into the dresser. After the witch comes close to the closet, proceed to move Graham slowly across the room until keeping him to the witch’s back until you get him behind the painting.

For the Moral Quarrel game if you want to get two points with Vee, choosing answer ‘A’ for the first answer and for Vee’s answer. For Neese, the first question she asks the answer will be ‘B’… for the question she asks you, the answer will be ‘A’. If you want to win the game with Vee, the question for the Dragon will be ‘A’, if you would prefer to win the game with Neese you can choose ‘B’ for the answer and select her when the round starts.

After the card game ends and Graham moves around at night, take the elevator down to Hagatha’s room.

In order to unlock the door with the clock on it, you’ll need to move the hands into a specific position. The locked door must have the long and short hands in the following position to open the door in Hagatha’s room. 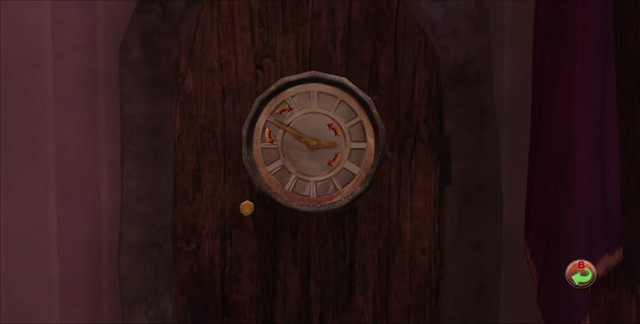 The next puzzle segment involves fixing the lute and board game. You can use the teleporter to get to the town square to get the necessary items. You can use the photos in your inventory to teleport to the different shops in the town. When you get to the square be sure to grab the knight’s photo from the tournament board.

Talk to Amaya to get the wrench. Give the wrench to Vee to fix the board game. The object of the board game is to get the red block to the end. The best thing to do is move the blocks around until you can clear the exit by moving the top block completely out of the way.

From there you’ll need to complete a series of quick-time events involving a dancing segment before being whisked away to Hornswaggle’s cave.

When you attempt to leave the cave you’ll need to hide under the bed when Hornswaggle and his brother arrive. 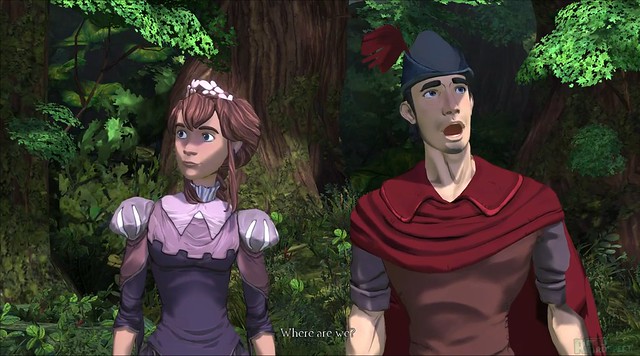 During the adventure with Neese there’s an option presented with a wolf that approaches the duo. You can choose to either shoot the wolf or wait and let Neese do a Disney moment with the wolf and comfort it by removing the arrow.

When you go out adventuring with Vee and Graham gets stuck in the quicksand, grab the umbrella and use it to pick up the small buckets. Grab the wheel and attach the umbrella, wheel and buckets to the skeleton and then Vee will proceed to get Graham out.

Another puzzle game ensues where players will have to work with Vee to get the hourglass out of the puzzle box.

After returning and conversing with Whisper, you’ll receive a second hand for the broken clock in Hagatha’s room. Place the piece on the clock. To find out where you’ll need to place the hands, hold up Hagatha’s Greatest Hits to the magic canvas and it will reveal the proper time, which should be 10:20. 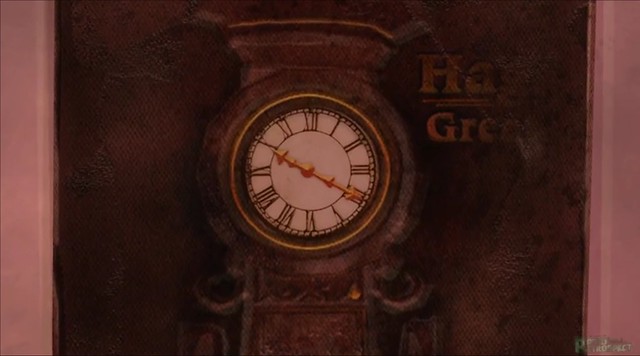 Press the button on the clock to open the clock and reveal the picture of Hagatha as a child with her supposedly evil parents.

Head into the next room where Hagatha is and give her the special box of memories from your inventory. Proceed to tell Hagatha to love herself and then give her the awkward poem that Whisper helped Graham write.

After doing the climbing segment back up the tower while racing against the frost spell, Graham saves both princesses.

King’s Quest Chapter 3: Once Upon A Climb is currently available for the PS3, PS4, Xbox 360, Xbox One and PC. You can learn more by visiting the official website.