Bethesda and id Software’s 2016 reboot of DOOM for the Xbox One, PS4 and PC has gotten off to a pretty big, explosive start in the YouTube  and live-streaming community. The game is a classic throwback to the old-school of gaming when thumbs could get red, palms could get sweaty, and rage-quitting happened during the single-player campaign. The campaign for the game isn’t very long but it’s a violent, gory, satisfying romp through the a sci-fi hellscape.

One of things you learn right at the start is performing Glory Kills. Click in the right stick to perform Glory Kills. The game doesn’t waste any time in throwing players right into the action.

The tutorial throws you right into the game and you will have to fight your way through the tutorial (literally). There is no sitting through 20 minutes of cinematics. This is a hardcore first-person shooter that hearkens back to the olden days. The game uses a Metroidvania style exploration and upgrade system. You can collect tokens to upgrade the Doom Guy’s suit and weapons.

The game promotes exploration, and it’s easy to get stuck. Thankfully, there’s a walkthrough available from various YouTubers, including a playlist from GameRiot.

Throughout the game there are also optional challenges available so you can continue to upgrade your suit while performing skill-based kills and exploring the levels.

Additionally, certain characters like Olivia Pierce will also key you in on what’s going on and how the hell portals were opened, adding a bit more context to what was originally hinted at in the first two DOOM games.

One thing to keep in mind is that you can replenish health and ammo by performing Glory Kills. The Glory Kills will result in the demons dropping additional supplies to keep blasting the crap out of everything that comes in your way.

Alternatively, if you run out of ammo in your main guns, use the chainsaw and Glory Kills to replenish your supplies. The chainsaw will net you some extra ammo, but chainsaw fuel is rare so use it wisely.

Each level will usually require finding the red, blue and yellow keycards scattered throughout the levels. Most of the cards are located on dead personnel. Fitting in with the exploration theme mentioned earlier, you’ll sometimes need to follow blood trails or holograms to find out where certain items or keycards are located. 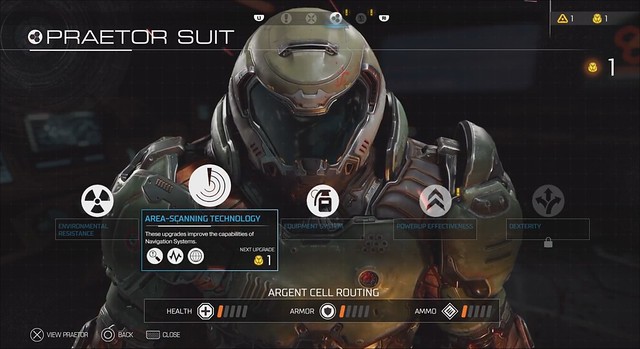 The Doom Guy is led through the UAC facilities to diminish the demonic forces and continue through the Foundry.

To kill the demons with shields, try using an explosive device at the feet of the shield demon to kill him, or get in close and use the chainsaw.

The game is so intense that it even forced GameRiot to have to stop and take a break because of how hardcore it is.

Moving through the Foundry requires a blue and yellow key. In the GameRiot walkthrough for DOOM, at the end of the second video he acquires the blue key. 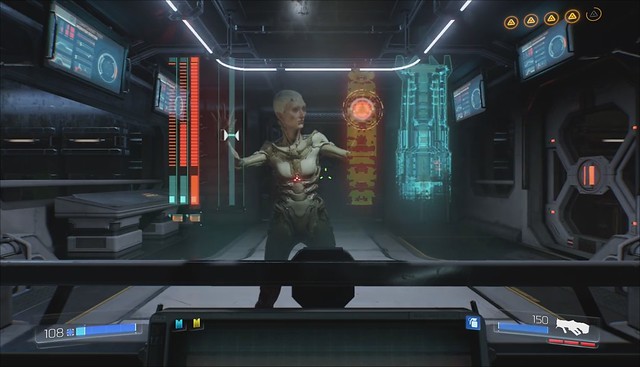 The entire game clocks in at just over seven hours. You can manage to get all the guns and many of the upgrades within a single playthrough. However, the game is designed to be played over multiple times in order to uncover all of its secrets.

One complete walkthrough from RabidRetrospectGames offers gamers a commentary-free look at the title. You can check out the seven hour walkthrough below.

If you’re only curious about the latter half of the game, there are also some useful videos up and available as well that cover some of the Easter Eggs and hidden content. You get a quick view of some of that content in the video below.

An alternate playthrough of DOOM‘s story was captured by Nukem Dukem, featuring a look at the end-game content and the final two main bosses, including the Cyber Demon and the Spider Queen Mastermind. You can check out the playlist below, featuring five videos, the first two of which are a couple of hours long.

Now if you don’t want any commentary but you still want to see how to beat the bosses, there’s also a video available for that as well. One strategy to keep in mind for the Spider Mastermind is using the BFG up front and then peppering the boss with rockets and plasma fire thereafter. If you have additional explosive add-ons for your gun, those would also come in handy, especially for the heavy machine gun and the shotgun.

You can check out the boss fight guide below.

Now, if you’re not entirely interested in the actual gameplay, but you were curious about the story content and the cinematics, there’s also a video available for that. All of the game’s cinematics and story sequences were compiled together for an hour and 42 minute long video. You can check it out below, also from RabidRetrospectGames.

And finally, as a special treat to those who diligently put their time into trying to find all sorts of small Easter Eggs you wouldn’t spot otherwise, popular YouTuber TheRadBrad has a quick video featuring id Software’s nod to James Cameron’s Terminator 2. There’s a segment at the very beginning of the video below that showcases what the Easter Egg is and how to find it. You can check that out below.

DOOM for PC, PS4 and Xbox One is available right now from e-tailers and participating retailers. The game seems to be quite popular amongst hardcore fans, so it’s something to consider if you don’t like first-person shooters that hold your hand and waypoint your way through the entire campaign.