One of the most popular new games out on the market is Paradox Interactive’s Stellaris. It’s a 4x strategy game that has taken the PC gaming community by storm. New players who may have picked up a copy to see what the fuss is about may have stepped in over their heads due to the complexity of the setup and the multi-layered mechanics that range from naval combat to interplanetary diplomacy. Well, don’t sweat it because there’s a beginner gameplay guide available for Stellaris to help you along the way.

YouTuber BAStartGaming did a basic guide walking gamers through the early parts of Stellaris, as well as helping gamers get setup so that there’s a core understanding of the fundamental principles for progressing through the game. You can check out the 17 minute guide below.

The core of your expansion is based on your ability to research new technologies and ways to expand your base of operations. Research is broken down into three categories, Physics Research, Society Research and Engineering Research.

At any one time three options will be available in each category for the research. After finishing the research on the items they will swap out for three new research items. The research items will randomize throughout the course of the game.

For currency, the game uses energy. The more energy you store, the more you can spend.

Minerals is what’s used for production and expanding

Influence is for diplomacy and determines what you can spend to influence other political leaders or put edicts into play that can alter things like encouraging free thought, applying information quarantines or advancing research. It’s also possible to alter policies that are affected by your influence, but the video notes that it’s not a terribly important thing to mess with at the start of the game. Also, you will only gain influence at the start of each month. 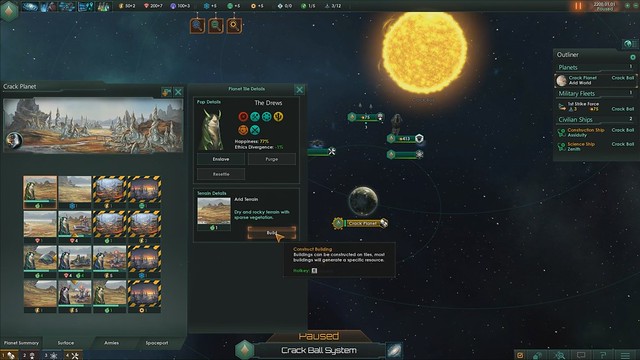 The actual meat and potatoes for the game boils down to managing resources and populations on a planet. When you click on the planet there are various tiles showing the different research, energy capacity, building options and population options for that planet.

If click a tile with a member of your populace on it, you may have the option to build a structure on barren terrain or resettle them elsewhere. It’s noted in the video to keep the population happy in order to produce more resources.

When it comes to building, each tile on the planet will have a small icon at the bottom of it along with a number. The icon indicates the affinity for that tile, so if the tile has a food icon, you can produce a farm there and gain additional food, combining both the farm’s production with the tile’s production. So if a tile produces one food, building a farm there that produces two food will result in the tile producing three food units.

If you attempt to build a facility on the tile with a different unit than the one that the facility produces – such as building a power plant on a tile that produces food – it will nullify the tile’s production bonus.

If a planet has various tiles that are blocked, sometimes with yellow or red borders, you can clear those tiles by clicking on them and then clicking on the “Clear Blocker” button. This will free them up and enable you to build facilities there. You will need a certain amount of resources to clear out blocker titles, so make sure you have what you need before you attempt to clear out blocker tiles.

The video also mentions that early on you’ll have a limit on the planets you can directly control. It’s important not to go over the limit when colonizing planets. If you colonize more than your allotment, it’s possible to break off planets into factions or sectors to bring the direct planet control limitation down under par.

As for actual gameplay, you’ll want to start off surveying the planets in your local solar system. This is accomplished by using the science ship and surveying nearby planets for resources, colonization or utility purposes.

If your science ship discovers yields, or resources, that can be gathered from the planet, you can then use your construction ship to gather those sources by building a mining station on the planet. To do this, simply click on the construction ship and then right click the planet and click on “Build A Mining Station”. 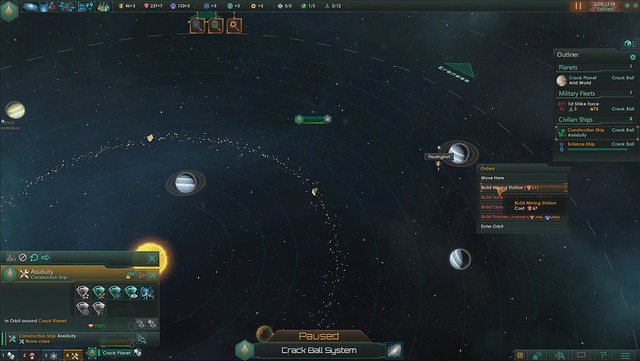 It’s suggested in the video to attempt to colonize planets outside your initial borders in order to open up more opportunities for expanding your reach growing your exploration opportunities.

Some random events can also be discovered while scanning systems and exploring planets. These random events are called anomalies. They present you with a risk/reward scenario, assuming you’re willing to deal with the potentiality of failure.

If you investigate some scenarios that result in a situation that requires further investigation, you can go into the situation logs and research the event further, if you want.

The guide above mostly covers the basics for getting your bearings and understanding how to get the core mechanics under your belt, but it doesn’t cover military expansion or combat.