Paradox Interactive really managed to hit it out of the box with Stellaris. The game has actually managed to sell in similar magnitude with id Software’s AAA release of DOOM. Paradox must be happy with the sales of the game that they’ve managed so far. Given how popular Stellaris is, there’s a flood of new players testing out the galactic empire building and 4x strategy game, so there’s a pretty good cache of walkthrough guides and tips for beginners.

One of the new walkthrough guides that’s been made available to the public comes from Etalyx, where he offers gamers a 30 minute video that covers some of the features of Stellaris, such as modifying the speed of the game where instead of pausing the game you can actually slow the game down below the normal speed. You can check out the video below.

So for establishing your military forces you’re going to need to first open up your space port in the tab. You can begin constructing some basic ships for your fleet.

Alternatively, you can build your own fleets from scratch using the custom ship builder. You’ll need to select the core of the ship, which will affect what kind of weapon and utility slots it will have access to, ranging from multiple small weapons slots to single medium or heavy weapon slots, to multiple utility slots with minimal weapon slots.

The core will determine what kind of ship class you build, whether it’s for support or for breaking through an enemy’s forces with brute firepower.

After selecting the core of your ship, you can then add whatever weapons you’ve unlocked to the available weapon slots on the ship.

You’ll need to be able to power your ship so be sure you have a Fission Reactor or some other power source to feed power to the weapons system, otherwise you won’t have an efficiently functioning ship. The goal when building a ship is to balance the weapons you equip on it with the power it’s supplied.

Once you have a couple of ships built, you can then deploy them once they’re built.

Additionally, a large part of the military tactics is the back and forth information battle that takes place as players will need to scout out their foes and their foes will scout out the players. Sometimes a scout ship will leave behind a faster than light trail that can be researched to find out more about where certain ships come from and how to better prepare for any kind of combat encounters. 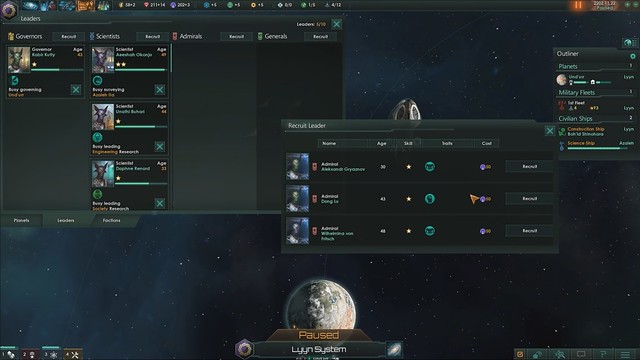 When building a fleet, they can be assigned a leader. You can select a leader from the Leaders list, which has tabs for Governors, Scientists, Generals and Admirals. You can recruit an Admiral and assign them to a fleet.

Admirals will each have their own traits and will cost influence. Some of them will grant bonuses to some defensive or offensive properties, and should be selected based on your play-style.

When assigning an Admiral to a fleet all the ships under their command will receive the bonus buff from the Admiral. You can also combine naval fleets by simply clicking and dragging the fleet icon at the bottom left hand corner of the fleet tab and moving it into another fleet tab. The game will automatically group up the fleets.

While creating a military fleet and not having any enemies to fight might seem like a waste of resources, take note that you can use the fleet to scout and explore the galaxy to discover new planets that can be colonized and added to your ever-expanding empire. 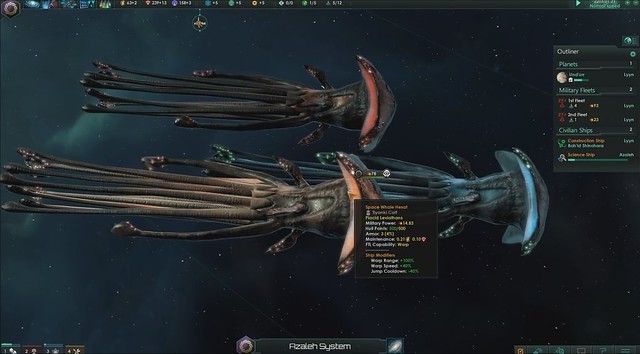 For those of you building up your military forces, it’s very important to research some basic military defenses or offensive materials such as missile systems or defense platforms once it becomes available.

As showcased in the video guide above, while scouting it’s possible to stumble upon a new system where it may be occupied by a separate alien race. Scouting is important for finding out what your rivals will be like and getting a scope of their might.

The actual combat is mostly automated, but players can still assign some light commands to their fleet, such as retreating if things are too overwhelming. You can also get an idea of what the damage output is like between the battle participants with a blue and red bar above the stats in the Fleet Combat tab. His will show you whether or not you’re winning or whether or not your ships are incurring heavy damages our outputting heavy damage. 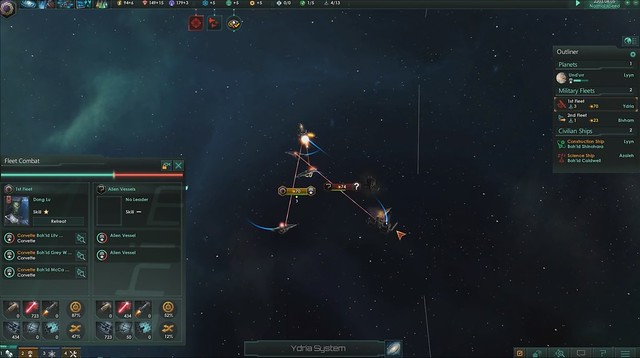 It’s also possible to use some of the options in the fleet menu to quickly redirect them back to a space port or have them travel to the nearest station for repairs. As demonstrated in the video at the top of the article, sometimes winning a battle isn’t just based on pure numbers or pure military might, but leaders can drastically change the outcome of a battle. Hit-rate can make or break a fight even amongst equally measured ships.

Stat micromanagement is essential for finding a balance that will allow you to have a fleet that is both mobile and powerful.

Stellaris is available right now exclusively for PC. You can learn more about the game if you don’t already have a copy by hitting up the game’s official website.