YouTuber Arekkz Gaming put together a a video guide to help hungry Monster Hunters learn how to slay the great multi-headed Nakarkos. It’s a 15 minute video that covers some of the equipment you might consider using and some of the tactics that will help you get through the battle. Check it out below.

So the main thing is that early in the fight you’ll want to aim for the different necks and avoid attacking the body directly. Chip away at the necks until Nakarkos is weakened.

After hacking and slashing on the necks repeatedly, the main body will fall over and expose an opening that can be attacked. While it’s fallen over, start to attack the body until it burrows under the ground. From ther eyou’ll have to rinse and repeat the process of attacking the necks until it’s weakened and falls over again.

During the fight you’ll also want to avoid getting hit by the blue substance. If you do manage to get it on you, avoid rolling at all costs, otherwise you will get stuck on the bones on the ground. It’s suggested in the video to just keep running until the blue status effect wears off, and then you can get back to business. Additionally, if you get knocked over while under the effects of the blue substance, it will also lodge you into the ground, so keep that mind if you get hit with it while fighting Nakarkos. 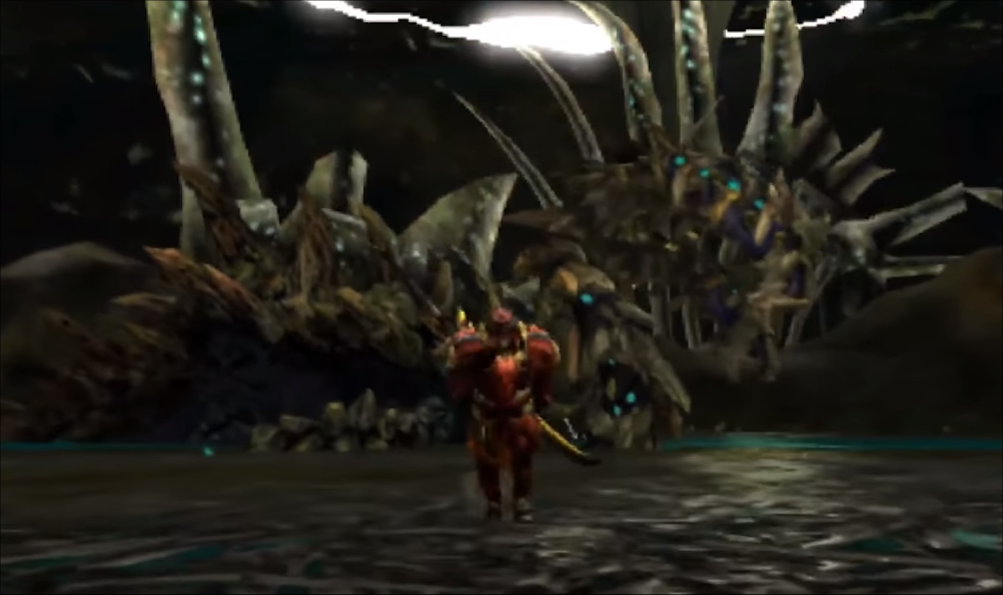 Nakarkos also has a charge attack you’ll need to watch out for. He’ll reel back with wind effects surrounding his body, indicating that he will charge directly at you. Simply dodge out of the way to avoid being hit.

It’s also possible for it to become enraged, at which point the skulls at the end of the limbs will change and will attempt to try some new attacks against you. Essentially, just stay out of the way and avoid being hit while continuing to rinse and repeat the method of attacking the necks until it burrows back under ground.

If you have a clear shot and it isn’t shooting lasers at you, you can use the rope turret to help bring down Nakarkos to the ground so you can attack the main body.