Plenty of gamers playing Battlefield 1 are probably curious about what the best weapon loadouts are for the classes and which ones best suit a specific play-style. Well, there’s actually a very handy class guide available for using the best guns in Battlefield 1, which is currently available for the Xbox One, PS4 and PC.

YouTuber Jackfrags put up a 16 minute video highlighting the different weapons best suited for the different classes in Battlefield 1. You can check out the video below.

Jack walks gamers through each class and what weapons work best for different situations.

The M1918 Storm is a fast-firing SMG that mentions as being great for CQC encounters. When you’re in close and you need to take out foes, the Storm is said to be great for the job.

The 60-bullet Hellriegel 1915 is praised for its longer-range capabilities. The large drum makes it suitable for multiple engagements and the compact spread makes it ideal for short bursts taking out nearby enemies.

Overall, for the Assault class Jack suggests using the MP-18 Trench. While he admits that personal preference is what should be the deciding factor, he found that it’s a good all-around weapon for most newbies, especially given that he mentions that the accuracy is slightly higher with the MP-18 Trench.

The Assault class also has access to four different gadgets. Dynamite, rocket bombs, anti-tank grenade and an anti-tank mine. He suggests going with the anti-tank grenades more often than not because it allows you to sneak out from behind a rock and just lob it at an enemy tank.

He also offer tips on placing down mines and then throwing a grenade at it to set it off to instantly blow up a vehicle. However, he notes that the rocket bombs are a lot safer and you can easily replenish them by running over a satchel pack dropped by a Supply class.

His ultimate weapon loadout for the Assault class is a Hellriegel, an AT Rocket Gun, a tank grenade, and a no. 3 revolver.

The Medic class has various weapons at their disposal, and Jack feels that weapons like the Cei-Rigotti Trench rifle is a great mid-to-long range weapon that can take out foes both near and far. It has a semi-auto and an automatic fire mode.

The Autoloading 8.25 Extended is another semi-auto rifle with a 16 bullet magazine. He suggests it as a good run-and-gun class on close range maps where CQC is inevitable.

Jack mentions that the Mondragon Storm is another good choice with variable modifications available to make it viable as a long range sniping weapon.

The syringe allows you to revive dead teammates and the rocket grenade can be used to whittle down the health of a tank or take out a small room filled with foes.

Jack’s ultimate loadout for the Medic includes a syringe, a medical pack, a revolver and a Cei-Rigotti Trench. 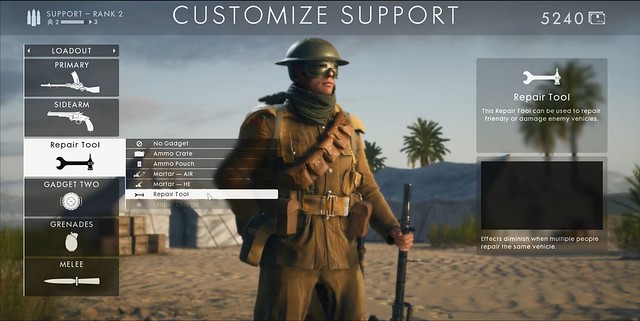 Jack’s rundown of the Support class includes taking a look at what weapons best suit which kind of play-styles you prefer. Jack’s preferred weapons include the MG15 n.A. Storm, MG Storm and the Bar Storm. He notes that the MG15 has better accuracy and makes it a preferred choice for mid-range encounters, especially with the magazine housing 100 bullets.

As for the BAR M1918 Storm, he notes that it’s the better gun to fire with better accuracy, but your magazine will run dry, very quickly, with only 20 bullets on the clip. The Madsen MG Storm is a beefier rifle with 31 bullets to the mag. It’s not identical to the BAR M1918 but it does allow for similar mid-range combat with less reliance on having to reload.

He doesn’t disparage users from taking up the Lewis Gun Low Weight, but suggests the other three for newbies just starting out who want to get their bearings.

As far as gadgets are concerned… the Support Class features an ammo crate that teammates can run back to in order to resupply. There’s an ammo pouch for a quick ammo charge for a nearby teammate – and much like the medical pouch you can use it while on the go as opposed to the crate, which is stationary – and there are two types of mortars and a repair tool. The Limpet mine can also be used to take out building walls and vehicles. It’s set on a timer so just place it down and let it fly. 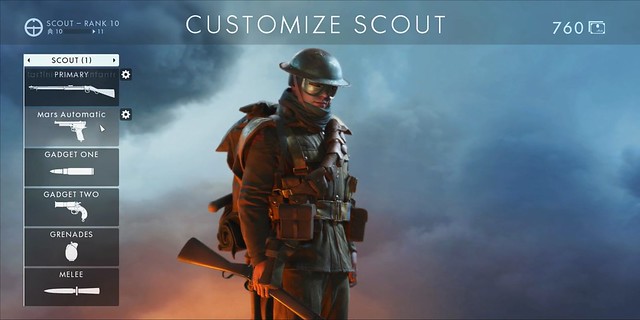 Scout Class
The last class in the list but certainly not the least of them, is the Scout Class. With the Scouts it’s possible to snipe from a distance. For a newbie, Jack suggests using the SMLE MKIII Marksman. He points out that it’s a perfect mid-range weapon and an all-around great choice for those just starting out. He mentions that the infantry version works well for trekking maps due to its low weight, while the carbine version has goo hit-rates overall.

According to Jack, it’s a toss-up between the Russian 1985 Sniper and the Gewehr 98 Markmans. He mentions that they’re practically similar with nearly identical stats. The bigger difference between the two is that the Gewehr 98 is designed with long range capabilities in mind at up to 100 meters out, where-as the the Russian Sniper is designed with a sweet-spot in mind of around 65 meters.

Those using the Gewehr M.95 Infantry will gain an advantage in the form of not having to un-scope to fire again, so once the next round is chambered you can fire whether you’re zoomed in or not. This means you can technically pull off multiple 360 no-scopes.

He also mentions that the Martini-Henry Infantry is equivalent to an Elephant Gun and offers gamers good long-distance accuracy with good one-shot kills between 30 and 80 meters to the target. He does add the caveat that you do need to be rank 10 in order to use the Martini-Henry Infantry rifle, but he feels it’s worth it since it’s one of the best guns in the game to use.

He reminds gamers also that you don’t always need a sniper scope on the sniper rifle for it to be effective. You can just as well use non-scoped weapons to take out foes.

For the gadget variants… the Scout Class has various gadgets to use. He suggests avoiding using Sniper decoys because it’s fairly limited. He also mentions that the protective shield is also fairly limited in its use, given that it’s cumbersome and not very effective during high-impact battles.

K-Bullets, however, are very useful, especially since they can be used to prevent vehicles from repairing. Flares are also useful because you can fire them in the air to spot enemies on the map or fire them at the ground to blind nearby foes and put them on fire if they’re too close.

The tripmines are also said to be useful given that they come in two variants: high-explosive and gas mines. The gas mines deal damage over time while the high-explosives will wreck anyone who accidentally crosses its path.

Jack’s ultimate loadout and best equipment stash for Scouts is a Martini-Henry Infantry, a K-Bullet, and a Flare Gun (spotter).