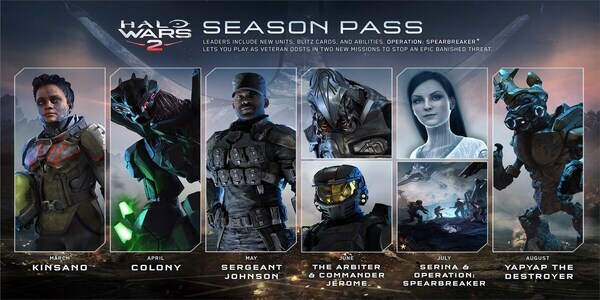 Halo Wars 2 is the latest entry in the Halo series and it’s a real-time strategy game. The game is available for the Xbox One and Windows 10 for PC. For gamers looking for a Halo Wars 2 gameplay walkthrough, they’ve come to the right place.

Creative Assembly has taken over the development duty for Ensemble Studios, creating a simplified control scheme for console gamers while attempting to court PC gamers with hardcore gameplay.

YouTuber RabidRetroSpectGames has a full playthrough of the RTS and goes through the entire game from start to finish.

You can check out the complete six-and-a-half-hour playthrough below.

Before getting into the campaign, you can start the game in the tutorial as Captain Cutter from the Spirit of Fire. The tutorial explains how to move units around. You can do so by pressing the ‘A’ button on the units and directing them to a position with the ‘X’ button.

Units automatically attack enemies on sight, so long as they’ve discovered enemies through the fog of war.

Units can be healed by bringing up the new leader skills menu.

Resources and power can be acquired by gathering supply caches. As you acquire power and supplies using your selected units, you can then build a base.

You’ll need to manage resources by building a firebase and using the empty sockets to increase the efficiency of your supplies. You can use the firebase to recruit more marines.

Marines only require supplies to create more units while Hellbringers will require both power and supplies.

The actual game campaign starts with a cinematic where the AI, Serena, from the first Halo Wars briefs Captain Cutter after waking him out of cry that the Spirit of Fire is in working order but she’s had to retire due to the seven-year AI cycle.

The Spartans will need to traverse through the map, uncovering the fog of war.

Activate the plasma bridge and continue toward the facility until the cinematic plays.

Use the Warthog’s boost to get over the gaps to reach the end and complete the mission.

The next mission is a hit-and-run scout mission to take out one of the Banished’s camps.

You’ll need to use limited troops issued by Cutter to get through the enemy forces of the Banished.

Follow the waypoints and take out the small Banished forces along the way while completing mission objectives, such as capturing power nodes.

Capturing Ark nodes will work as supplying your forces with a power source, just as it was practiced in the tutorial mode.

Move through the map and destroy the Banished’s base so that the Spirit of Fire can build their own firebase there. Just like in the tutorial, use the supply pads to build generators and supply buildings.

Take out the Banished energy supply stations as you build your forces. Also, keep your units out of the way of the energy build-ups that will strike down along the path of your units.

When you get through the main Banished’s base operated by Decimus, you’ll uncover the sub-boss. Be careful because he can call down energy strikes that can easily wipe out your entire garrison. A giant red circle will appear on the ground so you’ll have to move out of the circle to avoid being evaporated.

The next mission, Ascension, involves securing the Cartographer at the top of a Forerunner installation. You’ll need to secure Forerunner towers for Anders in order to get to the elevator and head up to the Cartographer’s location.

The beginning of the mission is a scouting mission, where you’ll need to uncover the fog of war.

It turns out that the Ark has been unleashing Forerunner defenses to wipe out Banished forces. You’ll need to capture three Forerunner control towers guarded by the Banished. They’re marked on the map.

Before you can take over the control towers you’ll need air-to-air support so you’ll need to build aerial support and take out the Banshee production facilities to limit enemy air forces.

The three Forerunner command posts work very similarly to standard capture point game modes. You’ll need to secure their location and defend them from the Banished forces, preventing them from retaking them or regaining control. A progress bar at the top of the screen will show you how far you have to go before the task is complete. Once all three points are captured the mission will end.

The next mission is One Three Zero.

Players take on the role of Alice, the Spartan who was previously labeled as “Missing in Action”.

For Alice-130, you’ll have the Spartan Slam and a Warthog’s chaingun at your disposal. There are only a few Banished troops to take out before you can free the Spirit of Fire’s soldiers.

Once the soldiers are free you’ll have some extra muscle at your disposal, Hellbringers to be exact.

Continue to follow the nav points and you’ll be able to commandeer some Warthogs to the little prison breakout. As you recruit additional soldiers and take out the Banished’s supply dumps, head toward the extraction zone to complete the mission.

YouTuber MasterOfRolfness offers a guided walkthrough of the Halo Wars 2 mission, the Cartographer, giving you some pointers and tips for making it through the level. You can check out his walkthrough below.

Before you can get inside the Forerunner installation, you’ll need to first take out the shields surrounding the conduits and then use your forces to pepper them with fire to destroy them. Once that’s done you’ll be ready for the next task.