Runic Games’ HOB is out and available on PS4 and PC. If you’re in need of a gameplay walkthrough guide for the recently released adventure game, there’s one available, covering many of the game’s puzzles and challenges.

YouTube GamePlayOnly offers up gamers a multi-part series covering the basics of the gameplay and what you’ll need to get done in order to progress during the early parts of the game. You can check out the HOB walkthrough below.

At the start of the game the player character will be freed from a tower by a giant ancient robot. Follow him through the environment as he opens up doorways and paths for you. He’ll lead you through a couple of different areas until you get to a part where he punches a platform around a circular track. There’s a small block you can use as a platform to jump up and then jump across to the platform he moved around for you.

Follow the pathway across the platform until you reach the fake giraffe. Some purple fungi will infect the player character and the robot will have to cut off its arm.

After the intro sequence the main character will be given the robot’s arm as a replacement.

When you exit the room go outside and press Square (or ‘X’ on the Xbox controller) to push the block to the other side of the platform and run across. Go to the area where the purple fungi is located but don’t touch it. Instead, head down and pull the block out and move it across to the other side.

Head down to the robot and the petrified statue kneeling with the sword. Press Square (or ‘X’ on the Xbox controller) to take the sword and move through to the next area. You can save your game and use the ingots in the smelter to upgrade your sword.

You’ll also be able to unlock new skills as well. Head back outside and proceed to travel down the edge of the cliff after clearing out the trees.

When you reach the bottom of the moss-ladder, jump across to reach the other side of the ladder on the right side of the structure above the gated door.

Continue around and use the block to reach the other mossy ladder rungs and travel up where there are a few enemies you’ll have to fight.

There’s a large enemy striking at an opening in the wall – fight him, kill him, and go inside.

Follow the pathway around until you reach a machine where you can stick your hand inside and get an upgrade for the arm.

Once you get the upgrade you’ll be able to open up pathways by charging up the fist.

Use the fist charge to pound open the button and head into the next section. You can also use the fist to break open walls by charging up and punching them.

Now that you have the fist upgrade, follow the pathway back outside and talk to the giant robot once more.

He’ll give you a few more ingots and instruct you to reach some erected structures in the distance.

Head back through the pathway near the beginning of the game and there’s a wall you can break through with your fist. Break through the wall and keep heading south through the area lined by the purple fungus. There’s a ladder you can climb that will net you some extra currency you can collect and use toward upgrading your combos and sword attacks.

Down and to the left of the ladder are some enemies you can kill. Continue south and you can earn some more currency by killing a baddie.

A few platforms are located nearby – climb up and move around the area along the pathway to face off against some more enemies.

Another relic station is also nearby so you can net some more currency.

There’s an area guarded by a goblin creature where a giant plant bulb is just outside the entrance of a small cave. Open up the plant and take the red cube inside. 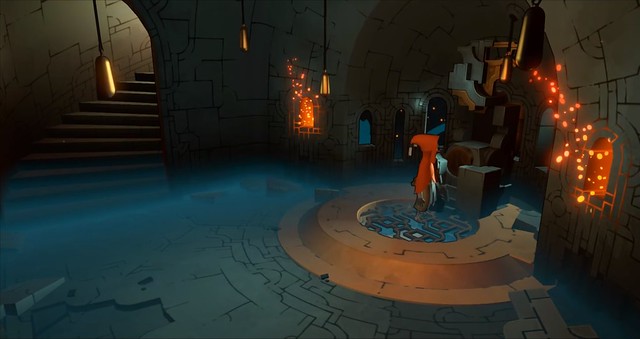 Go inside the cave to grab the schematic and then head back out and smash the switch on the ledge to your right.

Go through the opening further up north and go down the ladder to grab some more items. Just outside you’ll also find a dead robot; open up the chest to retrieve the item inside.

Proceed around to the bronze ladder on the ledge and go down and activate the switches to turn the power on in the area.

Proceed around the copper stasis fields and make your way up and around to the forested area where another relic station is located. Avoid touching the copper plates that are lit up because they will hurt you if you touch them.

Once you activate the relic station there’s a series of platforms you can climb up where a power cylinder is located. Take it and place it into the power conductor at the bottom of the platform; this will rotate around the platform and allow you to get to the other side of the area. 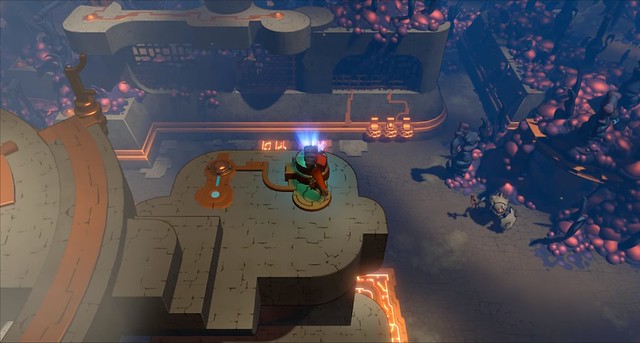 Make your way across the platforms and into the cave opening. Follow the ledges around until you reach the upgrade station for the robot arm in order to receive the next set of skills to help you along the way.

Once you get the upgrade a new doorway will open up and allow you to flip a switch that will lower a platform for you to cross. You’ll be able to use the stabilized particle transmission slipstream platforms to teleport across to the different areas.

Teleport across to the next platform and then turn the crank beneath it to reposition it to face north. Take the teleporter, press the switch to raise the other teleporter, and then travel across using the right bumper.

Exit from the cave, travel across the teleporters and then press the switch to power up the sphere in the middle of the area, this will allow you to control the platform like a mech.

Further right there’s a plant bulb with a red cube inside for you to collect, which will increase your life bar.

Even further right you’ll encounter a mini-boss and some crab-like creatures. Destroy the electric pylons that the creature uses to teleport to prevent it from teleporting.

Climb up the ladder just south of your position and there’s another power block on a platform. Push the block off the platform and lodge it into the socket on the far left. Climb up top using the second block and activate the steam machine power switch.

Climb up the ladder and then rotate the lever to completely transform the platform, and lower it to the ground. Climb down the copper ladder back onto the mech platform and and walk it all the way over to the northeast.

Climb up the rides on the broken archway and when you get to the top you’ll find a sword fragment by a petrified statue. Take it.

Furo has a further walkthrough guide providing a walkthrough of the desert area following the electric fields.