Tarsier Studios’ Little Nightmares had the latest DLC, called The Residence, made available for gamers. It’s an easy bit of DLC to miss because it wasn’t widely advertised and it came out during a time when Monster Hunter World and a few other games were tearing up the sales charts. Nevertheless, if you’re a little late to the party and were in need of a walkthrough guide, there’s one available.

YouTuber MKIceandFire has the full DLC walkthrough for Little Nightmares: The Residence, which you can check out below. The content is only half an hour long so you won’t be there for hours on end trying to trudge through it.

The start of the episode picks up from where things last left off with Little Nightmares: The Hideaway.

You’ll start in the elevator shaft where you’ll need to climb up the left side of the shaft and jump across to the hook and swing over to the opening on the right side of the wall. Climb through and fall down the hole until you come out of the shaft and into a library where books litter the floor.

Head into the next room, where more books lay scattered on the floor, like leaves spread across the front lawn on a chilly autumn day.

Head to your right and go into the reading crevice with the chair and desk. You can climb up the shelf and open the bottle.

Climb down and head further to your righ into the next room to see the Mistress in front of the cracked mirror. Slowly sneak across the room and head into the next area where the giant staircase is located.

You’ll find a door with an all-seeing eye to the far right, and bookshelves on the second floor.

Take the ladder and drag it over to the right until it hits the end. Climb up and go underneath the switch on the left side of the room. Jump up and pull the lever down to switch on the globe’s light. Head back down to the level just below that by taking the elevator lift on the far right side and head into the room on your right. Push the ladder to the left, climb up, grab the book and throw it to the floor. Hop down and place the book onto the shelf as indicated in the image above. It will open a latch to the secret room on the right. Push the book shelf open to go into the room and take the statue.

Bring the statue all the way over to the room on the opposite side of the main foyer on the second floor. Inside is a room with an eye and a statue on the ground. Take the ivory statue off the floor and place the wooden statue in the slot directly in front of the all-seeing eye. Pick up the ivory statue and bring it downstairs into the room on the right where there’s a broken statue on the pedestal.

Go all the way back up to the top floor with the glowing globe.

You’ll need to rearrange the lights so that each magnifying glass points at the three eyes up on the walls. You should have all three lights pointing at each of the three eyes, as indicated in the image below. 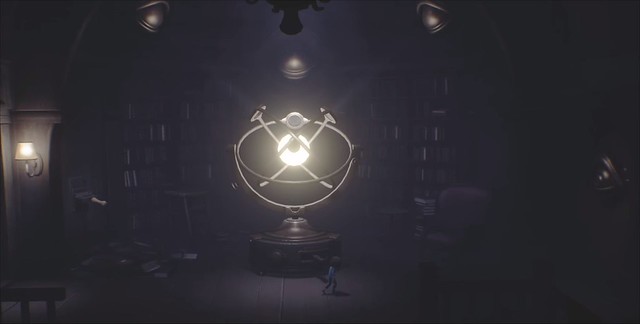 Go over to the door on the right side and aim the flashlight at the all-seeing eye to open the door.

The next puzzle will require you to turn on the portraits of certain figures in the next room. There are eight portraits. You’ll need to turn on the lights for portraits: 2, 3, 4, 6, 8. This will open up the door and allow you into the room with a bunch of porcelain statues. If you take the statue off the plinth, the eye will open and will begin examining the room. Stealthily make your way through the opening in the wall and there’s a bottle you can open it and take the scroll inside.

Exit the cubbyhole and sneak back across the room with the statue in tow.

Use the statue to throw it at the switch on the wall to open the door. Take the statue and exit the room. When the pedestal on the left raise up, take the bronze statue and place it on the far right plaque on the ground and a second pedestal will raise up out of the ground.

Head into the room on the opposite side of the foyer where the key is on the plush pillow nestled on the desk. Some shadow dolls will appear – use the flashlight and aim it at the dolls until they dissolve. There are a few of them.

Once you get done killing the shadow dolls, proceed to take the key and use the elevator lift to go to the top floor where the glowing globe is located. Open the door on the far left using the key you picked up off the pillow, and inside – in the foreground on the left of the screen, you’ll find a bottle. Open it.

Go into the room on the left where the door is open. There are some shadow dolls inside. Be wary of their presence.

You’ll have to kill all the shadow dolls before you can proceed.

Grab the wooden chair with the red stitched seat and bring it close to the lever on the wall. Use the chair to climb up and flip the lever.

Kill the shadow dolls in the next room. Climb up the bookcase and hop into the next area. There’s a shelf on the far left side. Climb up the shelf to get over the bannister and walk across the wooden ledge to get to the other side.

Climb down the ladder and go into the room with the spinning wheel in the center. Take out the shadow dolls while spinning the valve lever.

Lower the door and run into the next room as quickly as you can.

Run across the piano keys until the painting in the back of the room opens up. Take the bottle and open it. There’s a statue inside of a safe. Take it. Use the safe to jump up and grab the light fixture to open the door. Take the statue all the way back downstairs into the room on the far right and place it on the plaque.

Head into the next room where the Mistress is located. When you aim the light at her she will scream and turn into a ghost. If you into the room on the far right – where all the mannequins are located, you’ll find a bottle in the bottom right hand corner. Take it.

Exit the room and go down the hallway into the room on the far left side of the hallway – the door on the right will open up and you can go inside.

The Mistress will turn the little boy into a gnome.

Proceed to exit the room and take the basket down to the lower floor.

Make your way into the kitchen area where the sausage is located – as many of you know, Six visits the area later and eats the gnome that was once a little boy.