YouTuber MrDalekJD delivers the goods as usual, starting with how to get the Pack-a-Punch activated.

How To Activate The Pack-A-Punch Machine

The video is only three minutes long. It’s pretty simple. You start by going over to the pad where it faces the rock structure that gives you a view of the flaming wreckage. Stand on the pad and proceed to kill a few zombies on the pad.

When you get enough kills it will open a pathway to the ice caves, where you’ll need 750 points to enter inside. Kill the zombies as quickly as possible, and then open up each of the areas inside of the ice cave, including access to the teleporters.

Gain access to the blood altar room and then open the door that leads back out along an icy ledge until you reach an area where the blood is located below.

Before you can activate the teleporter, first you have to activate a brick in the wall in the area known as the passage. The brick should look like in the image below.

It’s a gray brick with a red glowing carving in it.

Press Square on the brick (or ‘X’ if you’re using an Xbox controller) and it will open an iron chamber. Step inside and it will fill up with blood. This will perform the first teleportation.

Every time you take the teleporter it raises the Pack-A-Punch machine from the blood altar circle.

Once you complete the three teleportation process you’ll be able to access the Pack-A-Punch.

There’s a more streamlined guide that clocks in at half an hour put together by MrDalekJD, and it starts with the typical Pack-a-Punch process but transitions into the steps you need to take in order to unlock the Wonder Weapon.

First start by filling up the three blood pools located around the map. The first pool is located near the ice machine. Kill the zombies until you get a prompt telling you that the pool is full.

The second pool is located in what’s described as the “weird” Egyptian room. The blood pool plate is located at the back of the room, and if you stand on it and face away from the wall you’ll see all the zombies flooding in to get you. Kill the zombies and fill up the blood pool. Head out of the room and down the stairs until you find a dark slab in the wall that doesn’t look like the rest of the wall. Head into the next room where there are some skulls on the ground and there’s a raven stone slab there.

Proceed to the blood bridge, which is at the Overlook location. There’s a blood altar of sorts on the ground with a hole in the center. Place the raven stone into the hole.

Then head down to the blood altar and kill the zombie that spawns out of the blood pool, and he will drop the shield.

Proceed to take the Thulian Shield Wonder Weapon. Once you get that done, it’s time to collect the next Wonder Weapon that you’ll need in order to complete the Easter Egg process.

How To Get The Thulian Scythe Wonder Weapon

The first thing you need to do is head to the Phylactery. Go up to the slab and hold Square on the slab to start a wave of zombies.

Kill all the zombies and then the Thulian Scythe will appear over a blood plate.

You can upgrade the Scythe very quickly by going back to the spawn area and picking up the wire from the plane wreckage. Next you’ll need to kill the Corpse Eater zombie. In order to spawn in a Corpse Eater you need to ride in one of the teleporter machines to reach the Pack-A-Punch.

Kill the Corpse Eater with the Scythe and it will cleave its spine from its body. Take the spine and head back to the Phylactery and place the spine on the altar overlooking the giant blood pool. 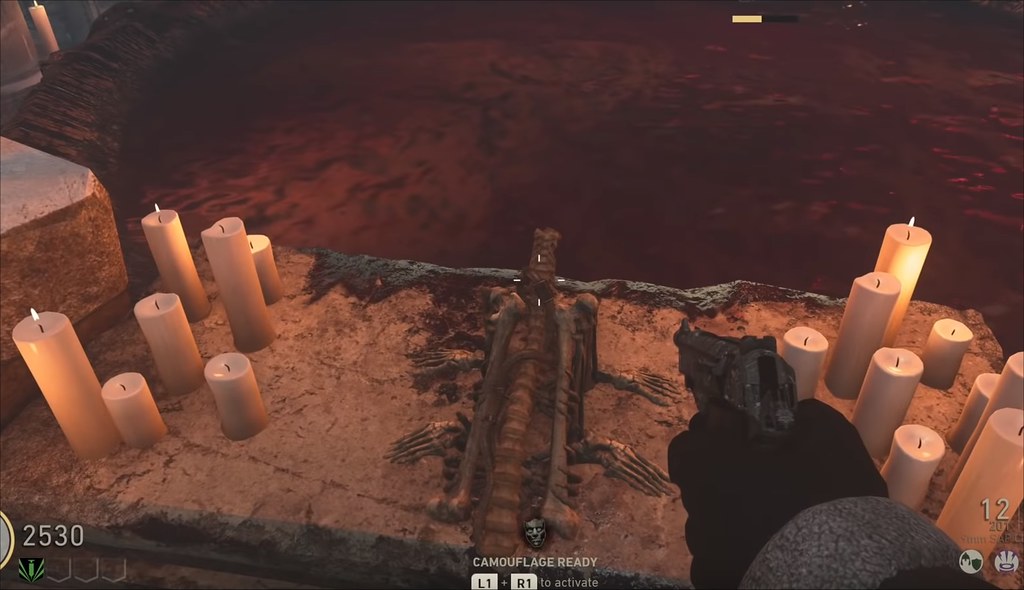 How To Get The Thulian Hammer Wonder Weapon

Up next is the Thulian Hammer. Go to the spawn area and there’s a battery on the ground just to the left of the gun rack. The Uberschnalle will be in the snow.

Carry the battery all the way to the cauldron overlooking the lava pit at the Overlook section.

It’s suggested in the video to do this as early on as possible, which means you’ll need to unlock the map as quickly and as soon as possible so you can reach the area and place the battery into the cauldron.

Get a bunch of kills around the battery to charge it.

You’ll need to acquire four stone tablets. You’ll find the first tablet on the ground near the perk machine.

The second tablet is in the ice caves. It’s to the right of the pedestal and you can pick up stone by holding down Square.

The third stone is located opposite of double tap, located near the blood altar on the ground.

The fourth stone tablet is located behind the armor machine in the morgue.

Runes will spawn on the back of where you placed the tablets. So go around to the other side and there will be four rune symbols. You will need to get 1 kill for each rune, standing by the rune in the order that they appear on the back of the tablets. It can be a little tricky, but it’s explained at the 7:00 mark in the video above.

Once you complete this process, lightning will hit the hammer and it will teleport around the map. Crouch and approach the hammer. The hammer will zip away in a stream of lightning and you’ll need to chase it down until it arrives back at the Overlook where you’ll need to complete a puzzle involving four pillars.

You’ll have to use a third-party website in order to solve the puzzle. Visit the site Adamtcarruthers.com and he has a pillar puzzle solver.

You’ll need to input the direction arrows that appear on the pillars in your game, and it will help you solve the solution to the puzzle.

It’s advised that you do this puzzle in co-op until you solve the pillar puzzle.

Find the hammer and chase the hammer again until it goes back to the pillars. Once it reaches the pillars lightning will strike it once more and then you’ll be able to pick it up.