Conservative comedian Steven Crowder did a parody video called “Dr. Trump”, which was a completely original video. It was hit with three copyright strikes, which put the comedian on edge and was worried that the channel was going to be nuked. However, Crowder and the crew managed to get their lawyer involved and will legally challenge the copyright strikes to reduce the levies against the channel.

As reported by Society Reviews, it started with the Dr. Trump parody video that was published back on April 7th, 2019. You can view the music video below.

The parody video satirized both Kiss and President Donald Trump. The video consisted of original imagery, an original music track, and original lyrics. The song was used in another one of Crowder’s videos featuring an interview with Paul Joseph Watson titled #459 SCREW YOU, CNN!

However, Warner/Chappell Music, the publishing arm of the Warner Music Group, hit the channel with what Crowder claims to be three copyright strikes, which brought down video #459. The original music video featuring Dr. Trump can obviously still be viewed, but Crowder’s #459 video cannot.

Now typically three strikes would mean that the Steven Crowder YouTube channel should be nuked out of existence, since three hard copyright strikes on YouTube would usually results in a channel being terminated. Crowder discussed and hypothesized these possibilities during a seven minute video published on April 27th, 2019 titled “Louder With Crowder: Cancelled?!” 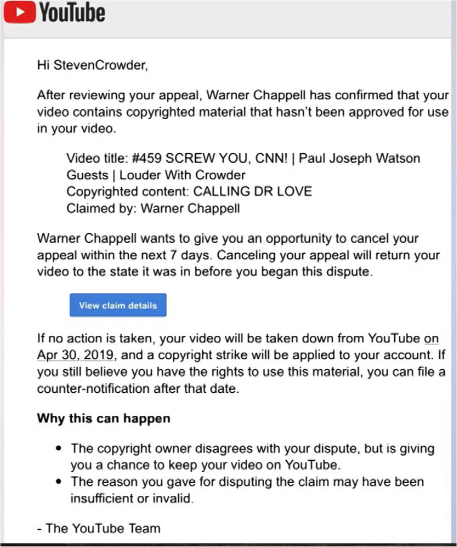 Unfortunately we don’t get to see what Warner’s original claim looks like, which makes it hard to tell if Warner claimed and blocked the video, or claimed and put a strike out on the channel. Crowder asserts that a strike accompanied the claim. For clarification, sometimes videos will be monetarily claimed by a group but no strikes will be issued. Sometimes a claimant will have the video removed or blocked worldwide and forfeit any monetization. Other times a claimant will block a video and then put a strike against the channel for hosting the content.

According to a second video that Crowder uploaded on April 30th, 2019, he goes a bit more in depth into what happened and where the channel stands with YouTube. Crowder explains that while Warner did file three claims against the video, only one strike was actually applied against the channel.

Crowder did have his lawyer Bill Richmond start the arduous task of going through the appeal process, and so Warner/Chapelle will either have to take it to court or drop it.

Now if they decide to take it to court then Crowder and his legal team will have to duke it out against the Warner Music Group to have the video restored. It’s entirely unlikely that the video will be worth the amount of money that will be spent fighting the legal battle, but at this point it might be a matter of principle for Crowder.

Alternatively, it’s entirely possible to lose the video(s) and allow the copyright strike to play out, at which point they will have a single strike on the official Steven Crowder YouTube channel for three months. As he mentioned in the video above, he says that YouTube told his team that having an actual strike on the channel during this process shouldn’t affect their live-streaming capabilities, but typically once you receive a strike your live-streaming privileges are restricted. So it’s not clear how all of that will actually play out as they await Warner/Chappell’s response. As Crowder points out, it could go either way.

As pointed out in the video by Crowder…

“This really is a policy that A) favors illegality. Favors extortion. Favors intimidation. […] And really favors the big boys.

“YouTube at one point was really about the content creators. It’s alarming how much it’s changed. That’s really what I’ve come to realize throughout this whole experience.”

A lot of content creators have complained about demonetization and copyright claims from big media who now make money on a lot of original content. There are also cases where YouTube will claim a video is “inappropriate” and demonetize it for the content creator but still keep running ads on it and making money on the content, which is what YouTube did to Crowder’s “Change My Mind” series. 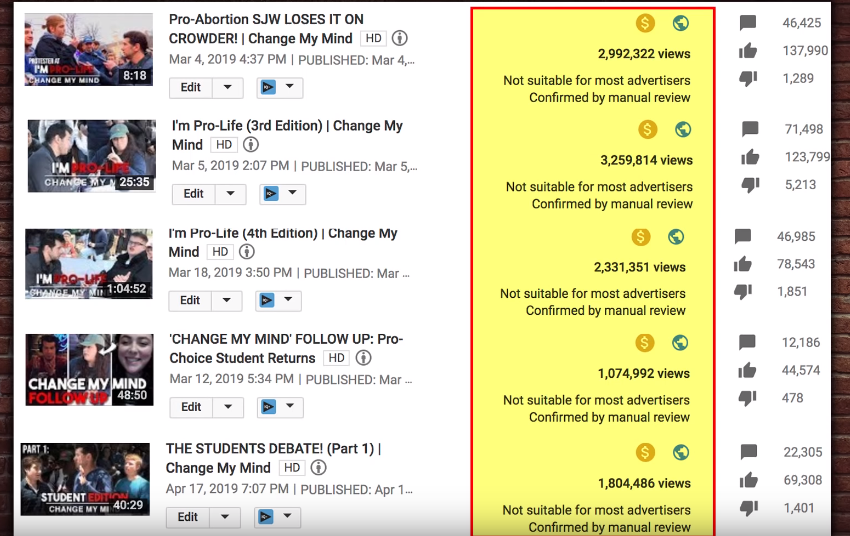 It’s hard to tell exactly how this situation will play out with Warner/Chappell since they’re known for being litigious and very aggressive in these kind of situations. However, they’re claiming content that was 100% completely and entirely original. It will be hard to argue that the content isn’t fair use since Crowder and the crew have all of the evidence very clearly proving that it’s all original. Only the most corrupt of corrupt judges would side in Warner’s favor. But in today’s clown world anything is possible.

(Thanks for the news tip Rala Cloft)