83679-34cookie-checkRolled Out! Playable Characters Are All Non-Binary or Trans, According To Devsno
News

Rolled Out! Playable Characters Are All Non-Binary or Trans, According To Devs

Rolled Out! is a game currently in development and crowdfunding by Brandon Johnson from Oshawa, Canada. It’s supposed to be a spiritual successor to Sega’s Super Monkey Ball series. Players take on the role of eight playable characters… all of whom are non-binary, according to the developers.

Over on the Discord page for Rolled Out!, the developers were talking about the project with some gamers in the frequently asked questions channel, and it was revealed that all of the characters are non-binary. This was in reply to a question “What are the playable characters/their names?”

The moderator, Upy, replied by listing the names of the characters and then stated that all of them are non-binary and use they/them pronouns.

If you’re unable to read the image, it states…

“Every single one of them is nonbinary and uses they/them pronouns!
In addition, there’s going to be a number of secret unlockable characters, including those added as one of the indiegogo backer tiers.”

The developers stated that some of the unlockable characters won’t be non-binary, but then Upy chimes in to state that none of them are “cis” so far.

What that means is that so far the other unlockable anthropomorphic characters are transgender.

That doesn’t mean that there won’t be normal characters at some point, but so far they’re all basically designed around the whims of confused 20-something tumblr users.

Not everyone in the Discord was pleased with this turn of events. Obviously most people play games to get away from all of the sociopolitical, identitarian nonsense that has encapsulated the entirety of social media and made interacting with people both a chore and a warzone. A few people in the Discord asked if this was all a joke, since there’s no way something like this could be serious. However, the mod responded saying that none of it was in jest. 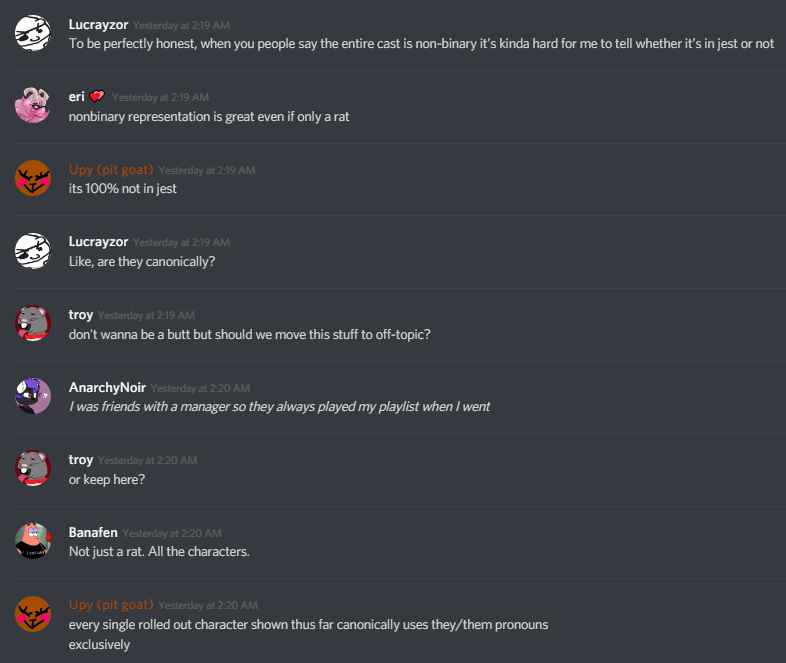 There have been a number of Leftist developers who have used social media to troll or “joke” about their politics online, making claims that they later say are just “jokes”. So far, however, it doesn’t look like the crew behind Rolled Out! are joking. Once you visit their Discord channel the very first thing you’re greeted with after being told “racism, misogyny, transphobia, homophobia, and adjacent things” are not tolerated.

While that may not be that big of a deal, below that you’re greeted with a message from Upy asking what pronoun emoji you would like to use.

This appears to be a running theme amongst the developers of Rolled Out!. Based on an archive, the head of the team, Brandon, has something similar on his own profile page, where he reveals he’s an artist and level designer who is pansexual with he/him pronouns.

This also syncs up with his profile on Tumblr and Discord.

Basically, this is just a heads-up for anyone who was interested in Rolled Out!, which is still collecting funds over on IndieGoGo.

You can see the pitch video below.

Just know that the rat in the ball and the other playable characters are non-binary.

(Thanks for the news tip BDK’s Shadow)