Even when NetherRealm Studios went out of their way to make all the women in Mortal Kombat 11 as ugly as sin, and took away all of the sex appeal that would lure in most normal, red-blooded, American males; even after tossing a bone to propagandists by having their most Conservative character, Jax, turn into a Left-wing authoritarian; and even after making all the men as buff and as sexy as possible, it still wasn’t enough to please Social Justice Warriors. Why? Because of former UFC and WWE women’s champion Ronda Rousey.

The typical anti-gaming websites were up in arms about Rousey’s casting in Mortal Kombat 11, mostly skipping over the most damning part of her inclusion in the game: her awful voice acting that was too flat, lacking any sort of emotion, and came across as unnatural.

Instead, places like Waypoint and Kotaku focused on Rousey’s unwillingness to step into the octagon against trans fighters like Fallon Fox, who has gone on to basically carry out every abusive man’s dream of getting into the ring and pummeling women into a bloody pulp until they lay unconscious and concussed on the mat.

Rousey’s reasoning for not fighting Fox was as obvious as Amber Heard’s lack of acting talent, where the Olympian told the New York Post in a 2013 interview…

“She can try hormones, chop her pecker off, but it’s still the same bone structure a man has. It’s an advantage. I don’t think it’s fair.

“I understand the UFC doesn’t want to be associated with views like (Mitrione’s). I’m also glad they didn’t straight cut him.”

Rousey became a prime target of ridicule from sites like Waypoint, where the author wrote…

“Let’s examine some of Rousey’s worst sins. In a New York Post interview regarding Fallon Fox (a professional fighter who happens to be a trans woman), Rousey said some really awful transphobic. That’s not all—she definitely tweeted a piece of tasteless Sandy Hook Trutherism. She later apologized for that one, but the damage was done. Rousey has used her massive platform irresponsibly, and in the case of her comments on Fox, to accept and relay downright hate.”

As I mentioned, Kotaku had joined in on the gig to run Rousey through the dirt, publishing a piece on May 1st, 2019 shortly after Waypoint, titled “Ronda Rousey Being In Mortal Kombat 11”.

“Fox is the first openly transgender MMA fighter in the sport’s history. She had undergone sex reassignment surgery in 2006 but received pushback against the idea that she could fight against other women. UFC president Dana White stated that he didn’t believe Fox should be allowed to fight other women. Former NFL defensive tackle and MMA fighter Matt Mitrione called Fox a “lying, sick, sociopathic, disgusting freak,” and was later suspended for his comments. Through all this, Rousey declined to fight Fox, insisting that her fellow fighter would have a physical advantage in the ring.”

It’s funny that Social Justice Warriors encourage female empowerment and for women to take control of their bodies… just until they decide they don’t want to be mauled in the octagon by someone who was born with a ‘Y’ chromosome.

Even Bounding Into Comics called out Kotaku for their rage-baiting piece, which doesn’t really seem to do anything more than attempt to rally hate against the athlete and actress. The counter-piece from the comic book and culture website outlined it perfectly, writing…

“Rousey is not the bigoted monster Kotaku attempts to paint her as, but instead exists as a human being with opinions and beliefs that may differ from generally accepted schools of thought, even an unpopular belief that has been damaging to survivors of a devastating school shooting. The level of outrage surrounding Rousey and MK11 appears to be artificially manufactured, a concept Kotaku themselves commented on in their article praising Rousey […]”

Jeremy Hambly from TheQuartering also took Kotaku and Waypoint to task for colluding to defame Rousey.

Unfortunately common sense is in short supply these days in most media circles, and the outrage culture manufactured by Waypoint and Kotaku quickly found its way to the Mary Sue, who published a piece on May 1st, 2019, where they wrote…

“In an excellent piece for WayPoint, Danielle Riendeau brings up two points about Rousey’s inclusion in the game: her previous transphobic comments (among others) and the fact that in the game she isn’t exactly good as Sonya, either. […]

“Consider the very recent issue of the IAAF upholding a sexist testosterone rule that both reeks of racism and transphobia (although Caster Semenya is not trans, the language being used is very much akin to transphobic statements about testosterone), and we can see that the mentality behind [Ronda’s] comments has a far reach and affects both trans and cis women because of the way we speak about gender.”

This kind of piggyback journalism is usually how manufactured topics become trends, and how trends turn into social media outrage machines.

A perfect example of that is how Yahoo!, a mainstream news source, picked up on the Social Justice Warrior rhetoric circulating within the enthusiast circles, and decided to carry the six-year-old comments from Rousey back into the consciousness of today’s readers all because Waypoint, Kotaku, and The Mary Sue chose to drudge up old bones for some virtue signaling points (or they were bored and couldn’t be bothered to cover actual gaming news for an audience they despise).

Yahoo! Sports’ published a piece on May 1st, 2019, following lock, step, and in-sync with the other outlets, where Cassandra Negley wrote…

“As Danielle Riendeau noted in a piece for Waypoint, there are thousands of girls playing as Sonya Blade because they actually can. For those who grew up in the 1990s, the game was one of only a few to offer a female character and therefore allow girls to believe they could be it one day. More than 25 years later there still aren’t many options and, she argues, Sonya Blade deserves better.

“Two articles dropped this week, the one in Waypoint and another at Kotaku, calling out Rousey’s inclusion based on two events in the past.

“She verbally took on Fallon Fox, the sport’s first known female transgender woman, and spoke against the fighter’s inclusion in the women’s division because of what she called a male bone structure. UFC president Dana White was against Fox fighting women while former NFL player and MMA fighter Matt Mitrione also spoke out against it, calling her a ‘disgusting freak.’”

Luckily, normies are starting to wake up to the stupidity of the media.

You can scroll through the comment sections of the Yahoo! Sports article and easily spot out plenty of people who not only agree with Ronda Rousey’s comments about Fallon Fox, but also call out Yahoo!, and the other outlets for doing little more than practicing ideological shaming because Rousey refused to kowtow to cultural-communist cow. 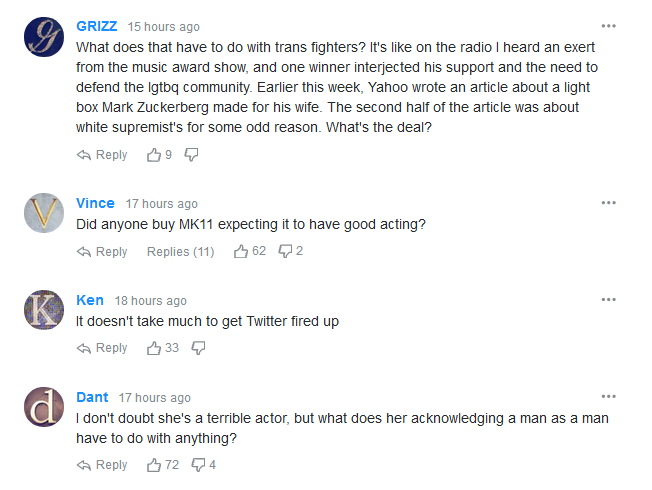 It’s also funny how Kotaku, Yahoo!, Mary Sue, and Waypoint were more concerned with six-year-old comments from Rousey than they were the continued exposure of employee-related complaints centered around poor working conditions at NetherRealm Studios, as outlined in a snippet from a US Gamer article that was published on May 2nd, 2019.

This is a pretty scummy thing to do, NRS pic.twitter.com/cGxSCDPXcE

“’Some of those Fatality sequences you love are from temp workers,’ revealed one source. ‘NetherRealm will send out an email early in production to get people to submit ideas for fatalities. Of course, they invite the temp workers because they can just give away an awesome idea without having to pay them extra for it. One person in QA made storyboards for their suggested fatality sequence. Their idea made it in, but they never got that full-time position they were chasing.”

Of course the more important story for those other sites was picking on half-decade old comments from a professional fighter and wrestler. Don’t be surprised if NetherRealm eventually makes a public statement, apologizing on behalf of Rousey to appease their Social Justice Warrior overlords. One could expect nothing less from a company that cut off their balls and tossed them in the dumpster next to Fallon Fox’s testicles, which is probably located behind The Mary Sue’s favorite abortion clinic.

This is all common practice for minions of the Intersectional Inquisition. Whether you said something in the past or in the present, you’re fair game for those who would sacrifice your name on the altar of the Progressive Stack.

(Thanks for the news tip Broken M and Minuteworld)