Doom Guy used to have only one major rival, the Cyberdemon. It was the most badass of all the demons and would pose to be more than a formidable threat to the Corvette-legged, ripper-and-tearer. Well, id Software has a new demon for the Doom Slayer to slay, and this time it’s a threat specifically designed to hunt down slayers, and it’s known as the Doom Hunter.

The reveal for the new DOOM Eternal enemy came via a short minute and a half long trailer during this year’s GamesCom. The trailer showcases the weapons at the disposal of the Doom Hunter, which moves around on a floating, jet-powered grav-pad. It’s armed with a bunch of swarm rockets and a chainsaw, not unlike the boss from Doom 3.

You can check out the trailer below, showcasing the Doom Hunter’s abilities and some of the places where he’ll show up.

The Doom Hunter isn’t as big as the Cyberdemon or the Spider Mastermind, but it’s large enough to make maneuvering around it difficult. 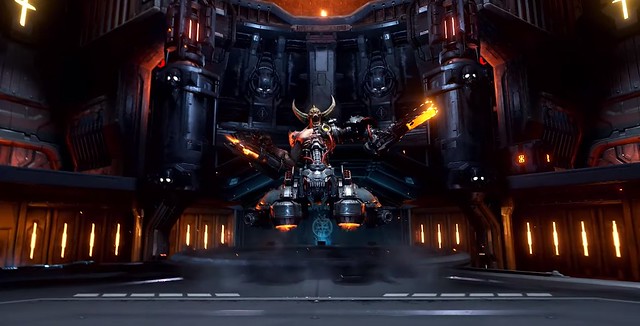 It’s not a groundbreaking foe, but it looks like something to help diversify the shooting tactics as players move through the environments and duke it out against the demons from the outer realms across space and the great beyond.

So far there’s no pozzed content in DOOM Eternal from what I can gather, and that’s a good thing.

Whether or not it will stay pozz-free is entirely up in the air, so we’ll see what becomes of DOOM Eternal when it launches on PC, PS4, and Xbox One on November 22nd, 2019 this fall.

(Thanks for the news tip Correctus)