Eternal Radiance’s title page is nothing special.  Upon booting the game, players are treated to a lovely, all too familiar JRPG background featuring three options: New Game, Options, Exit. It is a simple screen that embodies the quintessential essence of classic JRPGs. Gone was I when the title music began to play. I had received a package notification and got up to collect it from my porch when the music began to play.

It wasn’t something that can be proclaimed the next greatest soundtrack or anything magnificent like that. What it embodied or rather captured, was the sense the classic JRPGs used to give off when you started them. Before they became lost in lengthy cinematics, fully animated intros, and music videos. In that moment the package could wait, for I had to see what invoked this sense of familiarity. 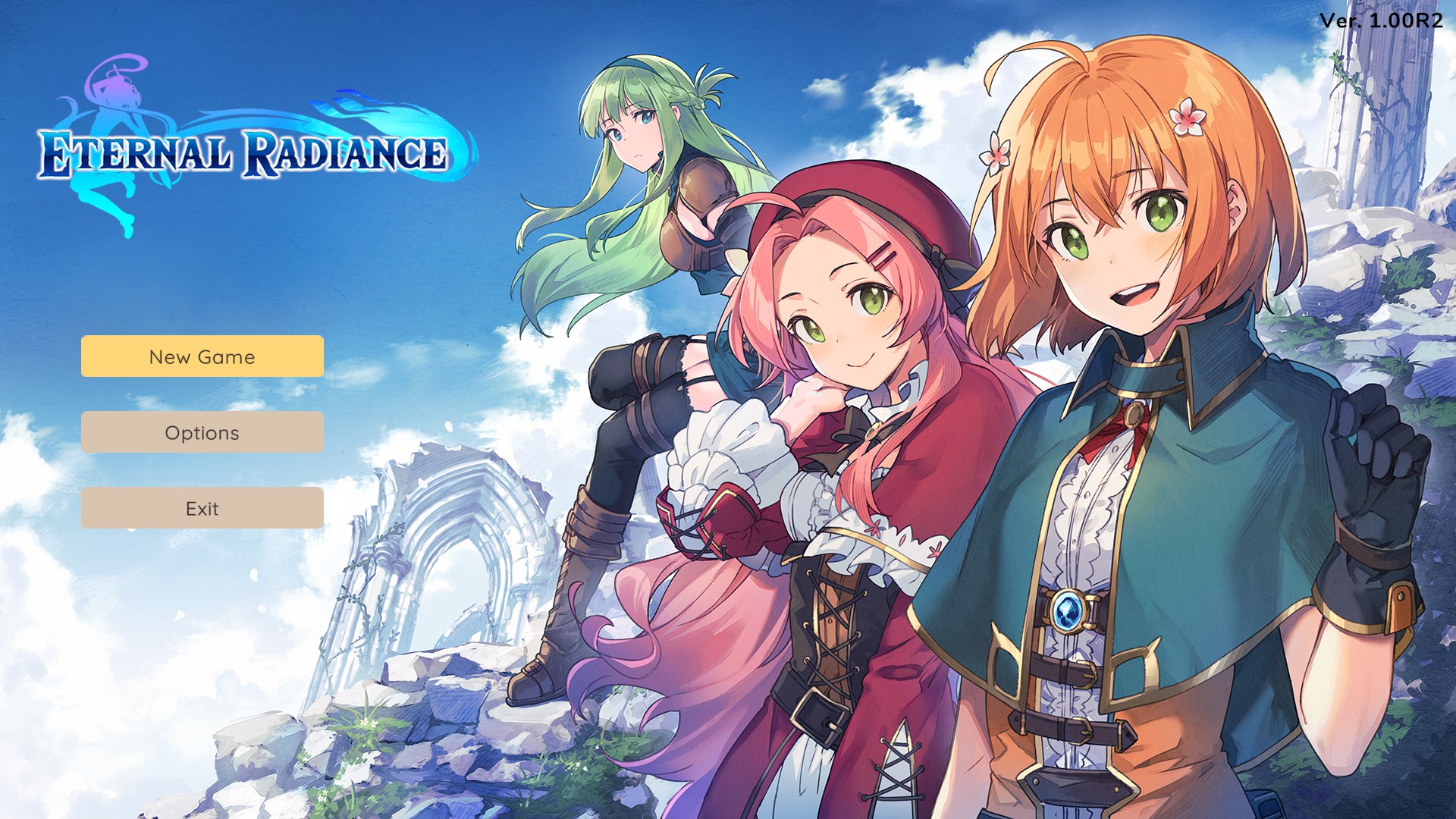 As I said, the title page is not something special, but that is entirely the point of the developer’s ambitions. Eternal Radiance aspires to embody the classic JRPG essence, and were it not for my knowledge the game had just left early access. I would have sworn we were given a key to an updated ported classic from Japan.

-easy to use systems with tutorials available 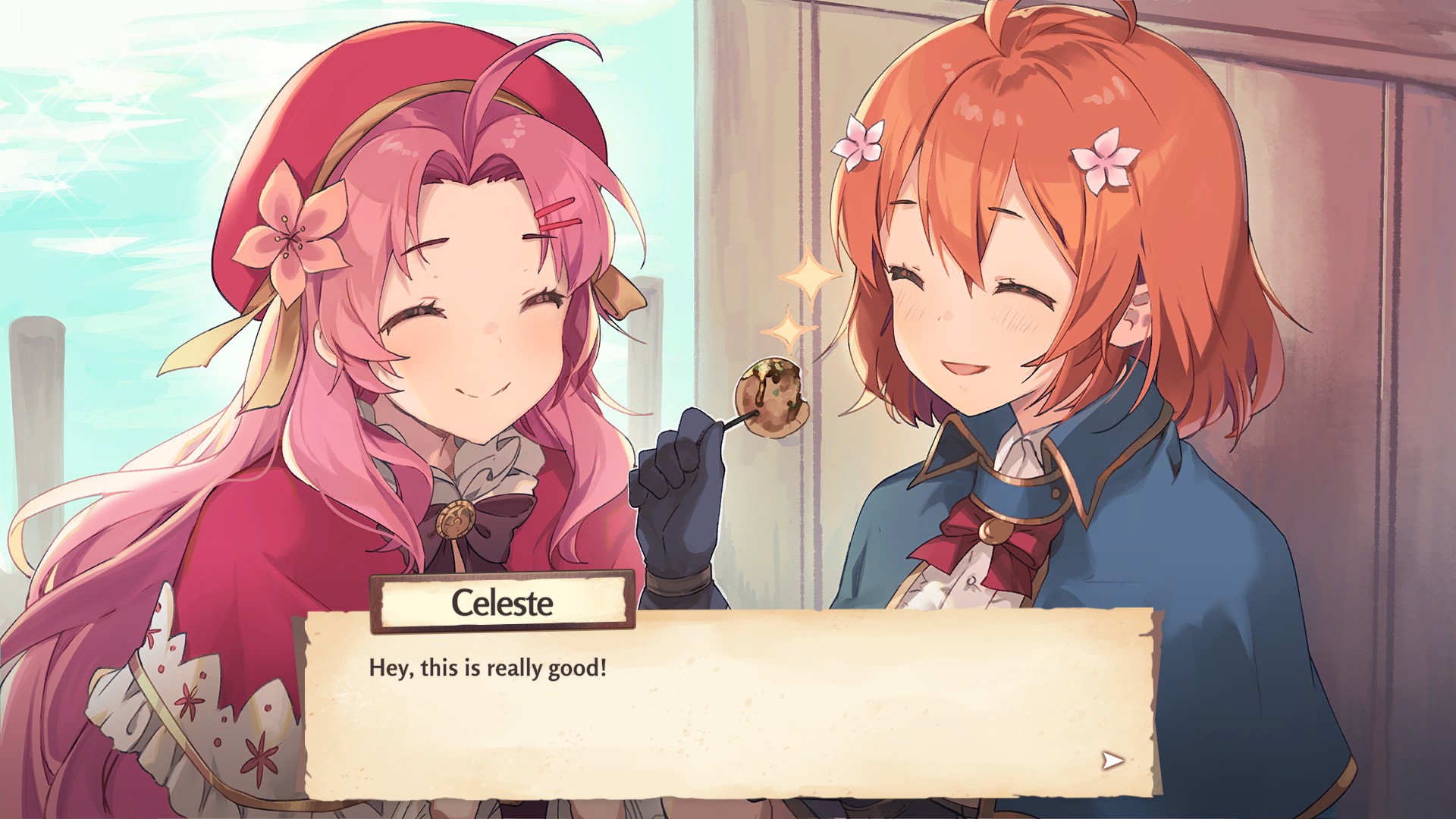 The game can be described as a cross between a graphic novel with fantastic art and a classic Japanese action rpg. Not to be confused with the western equivalent who refuses to allow you to die or suffer any consequences for failure. Combat here is brutal and deceptively simple.

There is light attack, strong attack, four ability/spell slots, dodge, jump, and block. With perfect timing on block or dodge, you get a bonus to damage or speed. Being a good Goblin Slayer upon setting out on my adventure, I laid into the first group of goblins with ease. After the second and third groups, the conclusion was this game’s focus was on its narrative with decent combat. Moderately difficult, slightly engaging, but nothing complex.

Owe the arrogant fool I was. Upon reaching the fourth group of goblins expecting more of the same, I was promptly handed my teeth. Armed with the foreknowledge of what to expect from mages, I proceeded to have my newly implanted teeth ripped out and sent back to the game over screen. At that moment, the dawning realization there was more to the combat set in.

It isn’t something that escapes simplicity. Instead, it exploits simplicity to focus on making moment to moment fights engagement. You have to strategize on the fly, remain mobile, dodge attacks when enemies start appearing in larger groups. Let your attention lax, and despite attacks being relatively telegraphed, you will take significant damage quickly. Dodging and blocking are easy and responsive, with my preference being on dodging and running around rather than timing the perfect block for the parry bonus.

Often combat can get boring in a JRPG, as you fall into a routine of firing off your winning combos in such repetitious fashion you could leave short detailed instructions and have anyone else grind their way through combat for you. Eternal Radiance keeps you engaged, focused, and dare I say it, having fun as approaches are adjusted on the fly. 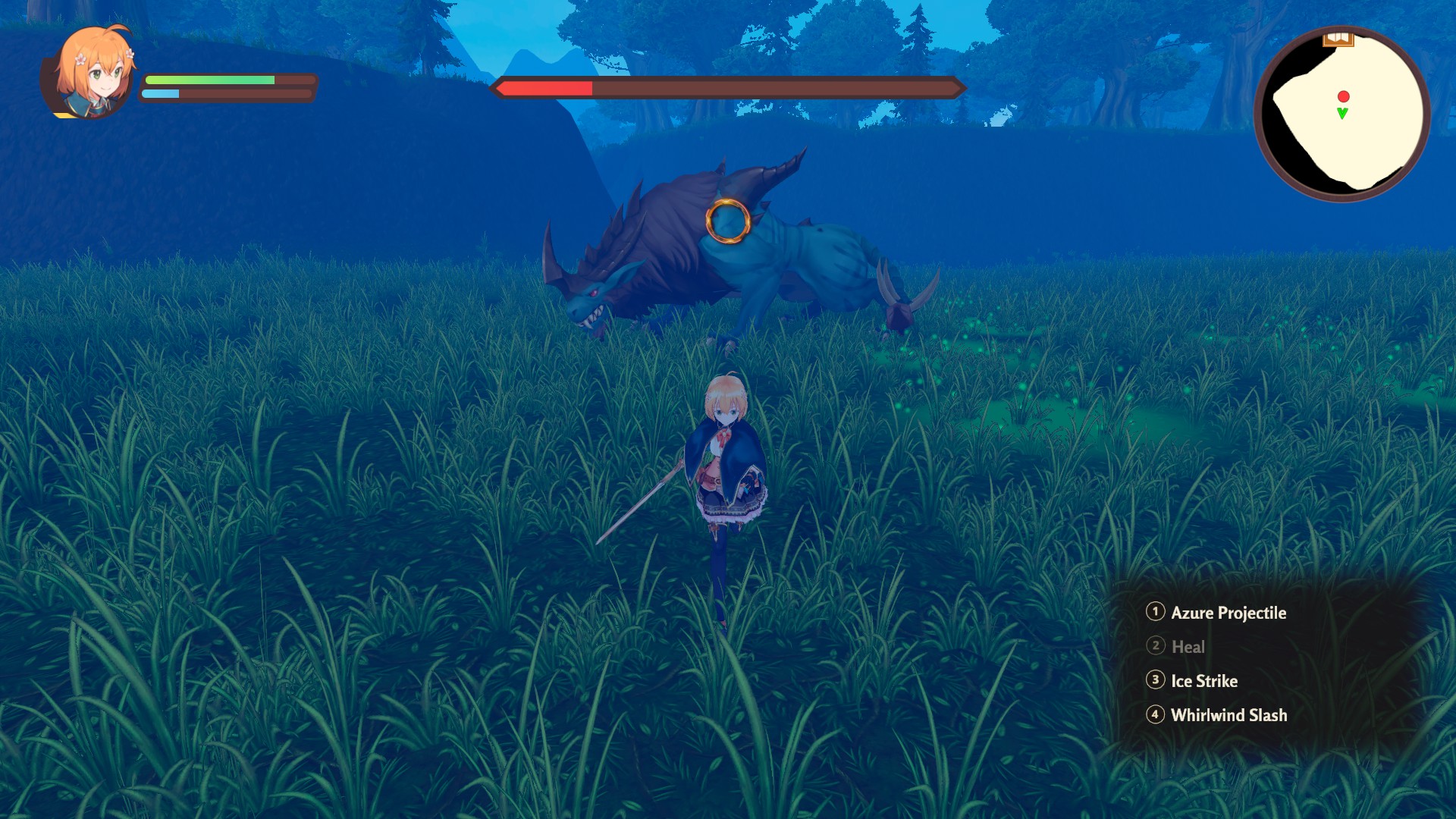 Fun, how I remember fun. It was nice, potentially the product of youth or naivety, but something that sparingly comes in a pure form. Yet what of the story?

Again, the game surprises. At first, Celeste, our main character who dreams of becoming a full-fledged knight, appears to be the standard cheerful, can do, motivated protagonist. One whose journey will be predictable, probably enjoyable, but overall serve as a vehicle to move the game from one set piece to the next as the big secrets of the world are revealed.

Then you get past the opening and discover she is a well-rounded character shaped by her desires and upbringing. Naïve to the world and oft to quote from the situations prepared by her training. She is functionally awkward, but at her core, good-natured. A good nature that at times is in conflict with the world and reality.

Not in a “we’ll be the change we want to be,” but in a narrative where intentions clash with consequences. At one point, Celeste wants to bring valuable crystals back to town to help everyone. An idea she is promptly told would put the miners out of work. Forcing her to consider the ramifications of her good intentions. After such, she settles on bringing two back to aid in the adventure. Narrative pathing will not deviate in this game outside character flavor and option question completion, yet having characters treat their world as though real brings more believability than what multi-million-dollar rpgs have achieved. 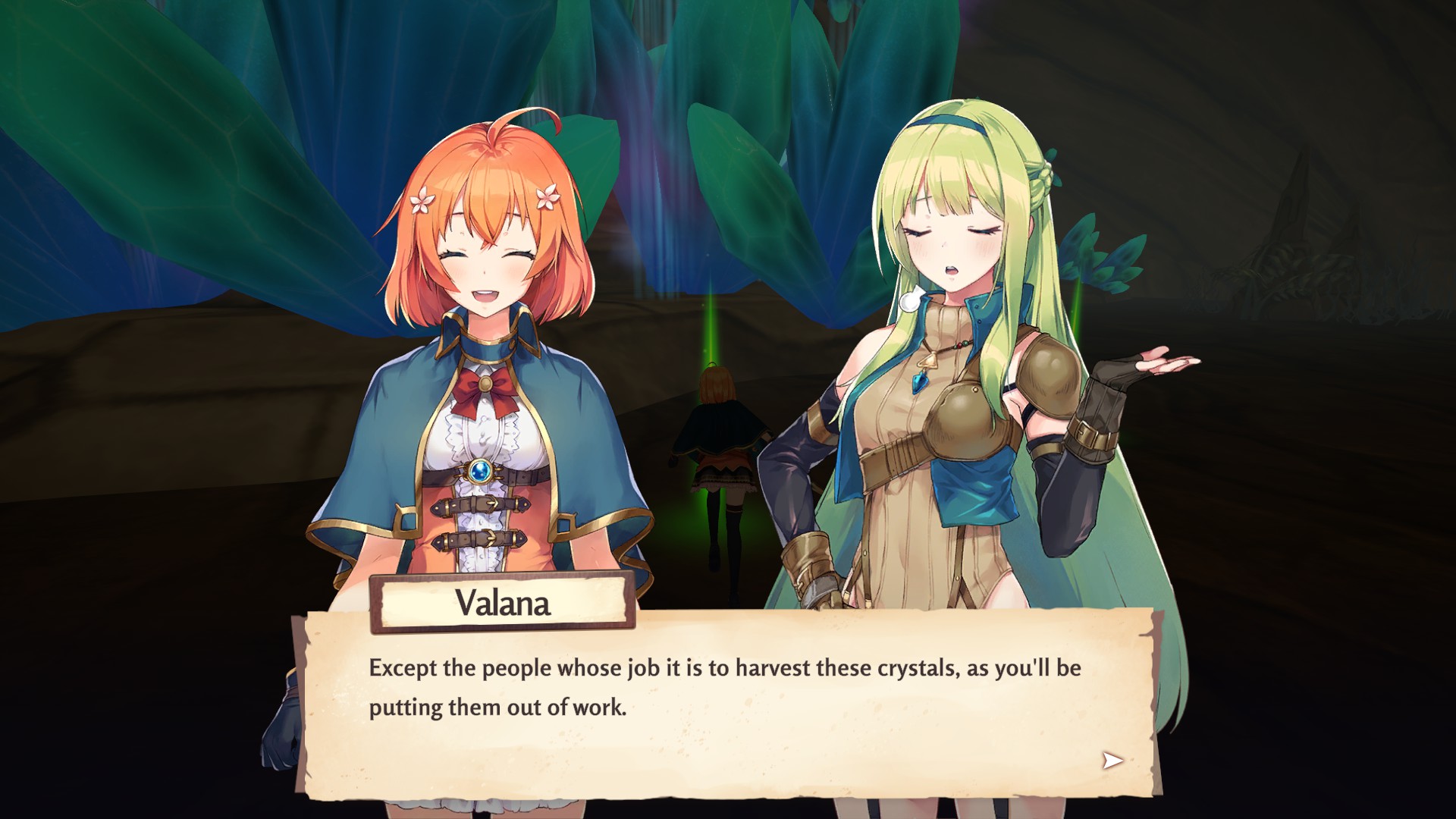 It is easy to see how different characters view the world differently based on their relative perspective. Celeste doesn’t consider her actions as worthy of celebration. She is a knight or aspires to be one. She grew up being trained among the best men and women to fight monsters and retrieve artifacts. What she has accomplished is what is expected of her, of anyone from the Ashen Order.

By contrast, the town’s people and guard who struggled to maintain control of the situation are in awe and want to celebrate their savior. More so as an excuse to celebrate, but as the guard says you have to take your wins when you get them. When Celeste views her actions as an unforgivable failure that she must redeem herself from, her superiors do not. They will find another opportunity for her to earn her knight status. When she takes off, Katrina, a trainer and mentor to Celeste, chides Captain Zacharias on how she is exactly how he is.

It is refreshing to see leadership that is competent and inspiring, characters interacting with the world based on their perception and understanding, and most importantly, having male characters not denigrated to uplift female characters. Zacharias is a kind, understanding, yet firm leader who uplifts those around him—demonstrating through his words and actions why he is in a position to lead a knightly order.

The Grumpy fisherman isn’t a dimwitted fool, but a man with his views on the importance of his profession. Also, still a grump. So goes with the rest of the cast. Some of lesser importances receive only a tiny bit of interaction, but enough to give you a feeling on the character.

Graphically the combat environments are of the passable JRPG style. Nothing spectacular, but at the same time, as far as I had played, they avoided falling into the trap of being repetitious to the point of boredom. Character range in physical shape, often befitting their personality. Celeste has a cute pouty face, as do several other female characters. Plenty of whom are endowed with great plot and “plot.” 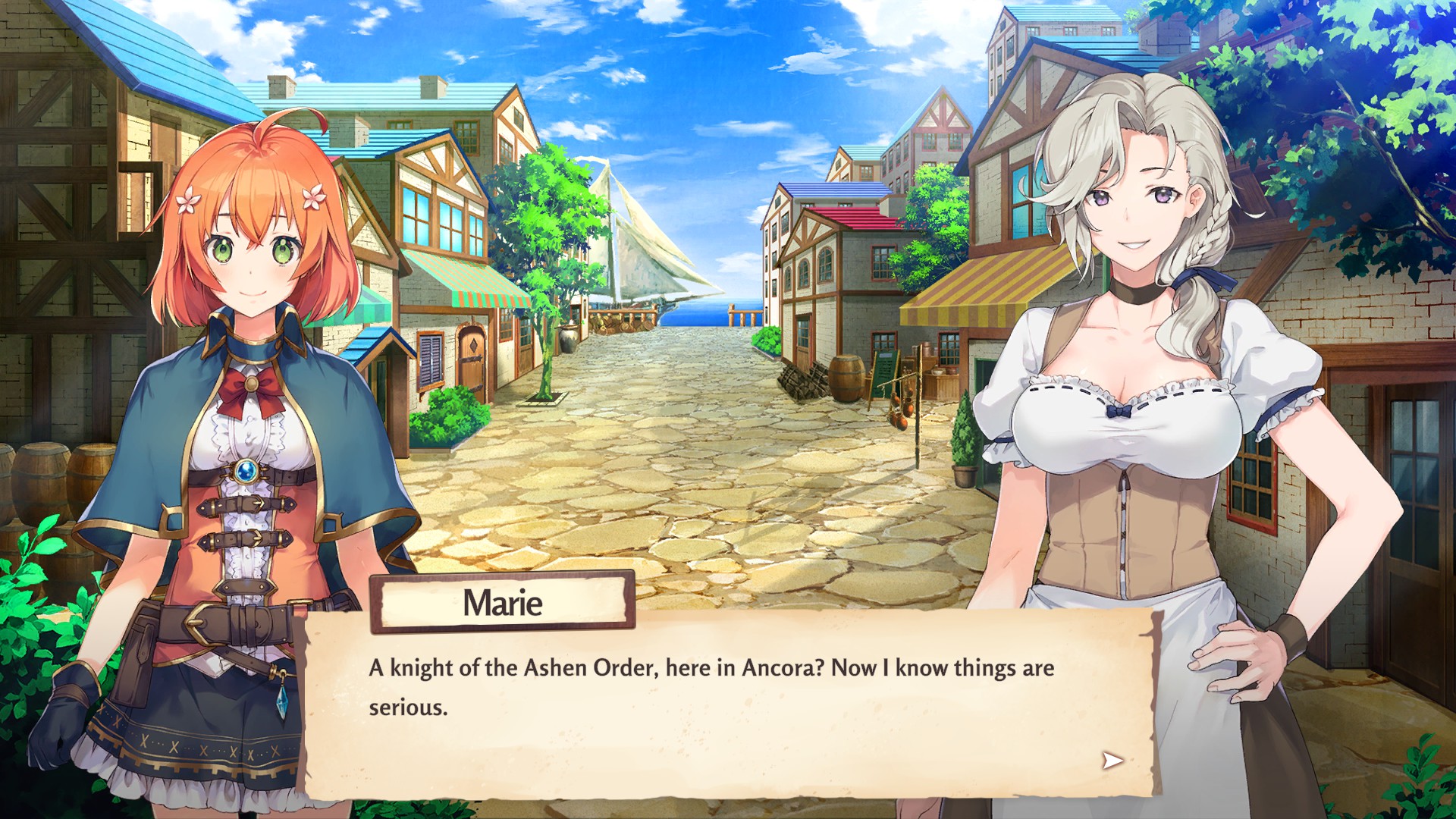 As with any classical RPG the goal is to continuously grow more powerful as you plow your way to each quest goal. Find and equip better gear is self-explanatory. Each piece provides set stat attributes that boost your attack, magic, or defense. With the enchantment system, you apply further stat increases to weapons from enchantment paper. These enchantments can be removed or transferred and carry up to four boosts.

The Skill tree is simple, but I liked that. There aren’t dozens of useless perks, meaningless status boosters, nor does it require a degree in mathematics to determine which skills to take. Suppose you want magic, boost magic. Regular weapons go down that skill path. The defense skill tree is for dodge, block, and healing. 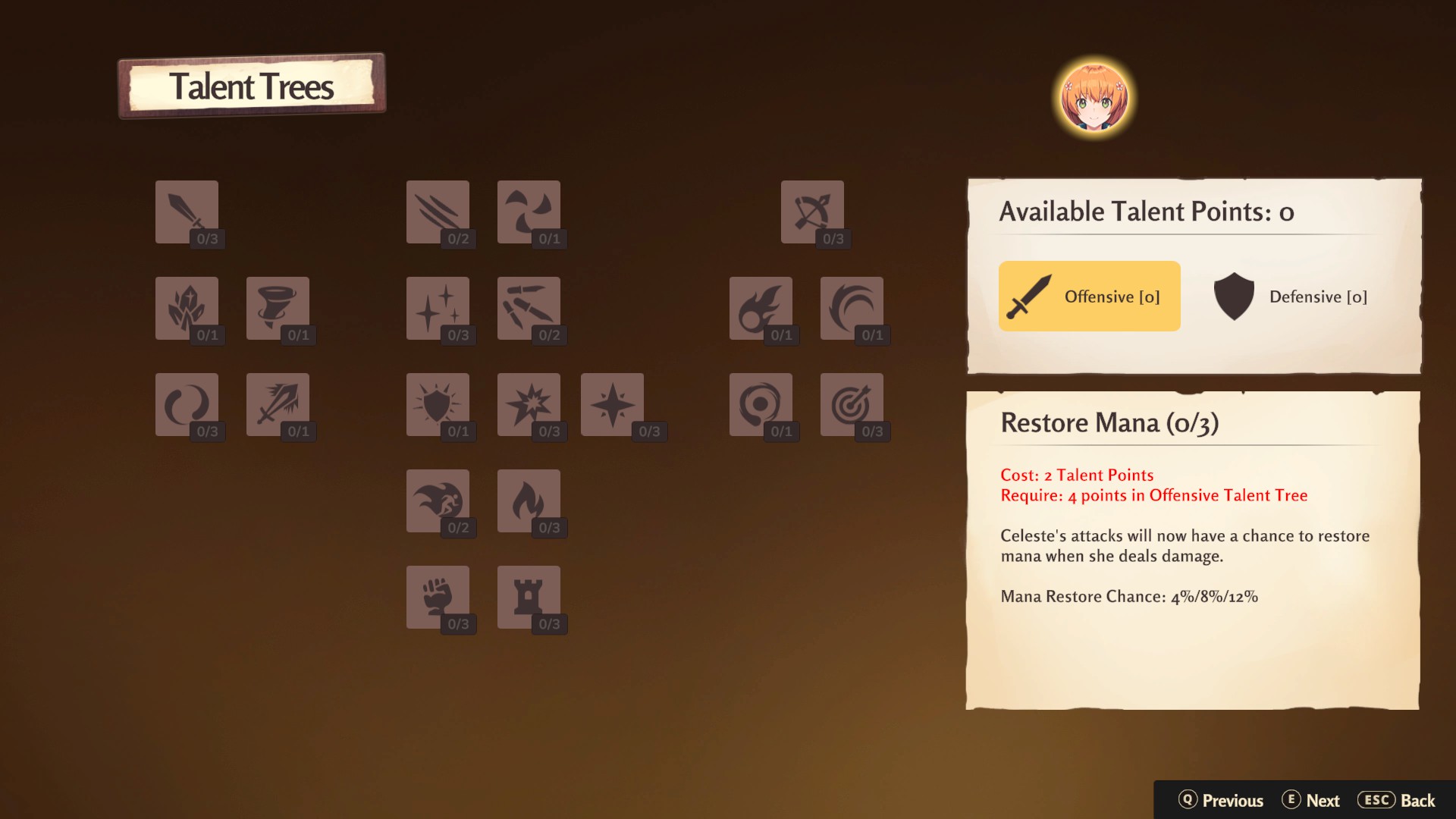 Quests and combat give you experience to level up. With each level providing a skill point. A simple, easy to understand system that doesn’t try to deceive you into believing there is a profound element in the game’s skill system.

Typically, there are plenty of downsides to counterbalance the positivity, but aside from some menu control issues, there haven’t been many. That isn’t to say this game is destined to dethrone all competition for the game of the year, nay decade. More so that it accomplishes what it set out to be and for what that is, it is enjoyable.

Eternal Radiance comes together as a reminder of why JRPGs were so enjoyable. In many ways simple, the game utilizes this simplicity to produce complexity that is more than the sum of its parts. Though some classic formula elements are smoothed over, it also carries all the shortcomings of a JRPG. Combat can be engaging, but it is simplistic. Death can come swiftly and not always fairly, forcing a reload and loss of progress if you aren’t making treks to the save points.

Environments are simple yet functional. Short enough, they don’t bog you down with the same room and tileset on repeat. Those familiar with the genre will get a lot out of this game and enjoy themselves. Those unfamiliar are offered a welcoming experience that doesn’t sacrifice for the sake of accessibility.

When all the positivity is said and done, it still is a classical JRPG. If you do not enjoy the genre, you are unlikely to be swayed by this game.