The software has been vigilant in effacing the cheats spawned from glitches in Bloodborne. Gamers have been vigilant in finding new ways to cheat by exploiting glitches. After patch 1.02 dropped that was designed to erase the original item duplication glitch, another PS4 user found a way to spawn infinite Blood Echoes within a matter of minutes.

Kenny Stimmel has a somewhat complex but effective way of duplicating Blood Echoes quickly and efficiently.

If you can’t watch the Bloodborne video for whatever reason, you can head to the Forbidden Woods. Head over the bridge and avoid the killer trap. Make a right at the first pathway and hop down off the ledge and follow the path to the right until you get to the broken bridge.

Head down the path and make a left at the first intersection. Follow the path and then make a right at the open gate.

Follow the path to the cages with the dogs and kill all the dogs.

The video mentions that all the dogs being dead are linked to the glitch. The pathway behind the cages will lead you into a cavern, follow it down until you get to the water part. Make a right and follow the wall all the way around until you get to a ladder and climb up.

After getting to the top you’ll head left through the gate. You’ll get to a part with a Cthulhu monster; wreck his face before he wrecks your face and then heads up the ladder and across the rooftops. Go into the house and make a right. 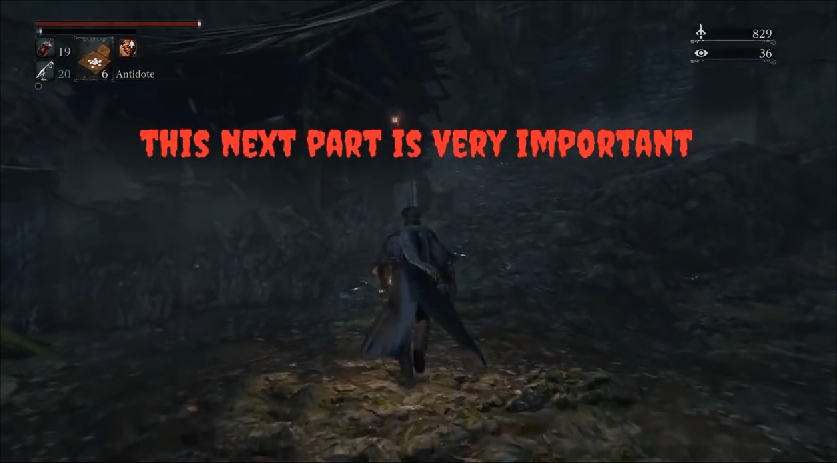 You should end up back at the start of the game and this is where the glitch kicks in.

I have no idea why or how it works, I don’t. I’m watching it and just not getting it. It’s the sort of glitch that hearkens back to the days of the Sega Genesis and SNES… back when glitches were cheats and you didn’t have to pay for them like in today’s AAA games *cough*Saints Row*cough*.

As mentioned by YouTuber Rykr Davidson…

“For anyone who’s saying the dogs are out of the cages, it’s most likely caused by you falling into a trap and the dogs being released. This happened to my younger brother, so he isn’t able to do the cheat. Thankfully, because I didn’t fall for the trap, I’m able to perform this glitch. ;D”

So yeah, if you spring the trap and release the dogs then you’re screwed.

If you’re starting New Game+, Kenny Stimmel has another Bloodborne video for you that you can check out below as an alternate way of triggering the glitch. Check it out.

If you already messed up and sprung the trap for the dogs, YouTuber Bighat Logan decided to offer gamers another alternative for glitch duping in Bloodborne. This is for gamers who started a new game and want to glitch early. However, take note that Logan warns you that you’ll potentially mess up your storyline as some NPCs will disappear. You can check out the glitch below after patch 1.02.

Bloodborne is available right now for the PlayStation 4. The game seems to be popular enough and is hailed as a very hard alternative to Dark Souls. You can pick up a digital or retail copy of the game right now.