For a while, the money glitches and duplication glitches for GTA 5 online component went away. Rockstar and Take-Two were cracking down on YouTube channels and hitting them with copyright strikes in order to detour people from showing money and duplication glitches, they even went so far as to start banning users and taking away their duplicated money. Well, the culture of glitches has returned now that Take-Two and Rockstar have gotten lax about policing cheaters.

Alternatively, some are saying that the glitch method from SpectacularGamer actually does work and it has not been patched out yet. The video is five and a half minutes long and walks gamers through the process of gaining infinite money.

First, you get the vehicle that you want to duplicate and keep it in a 10 car garage with no other vehicles.

Make sure that you have the Dune Buggy in the second slot, as pictured in the image below. 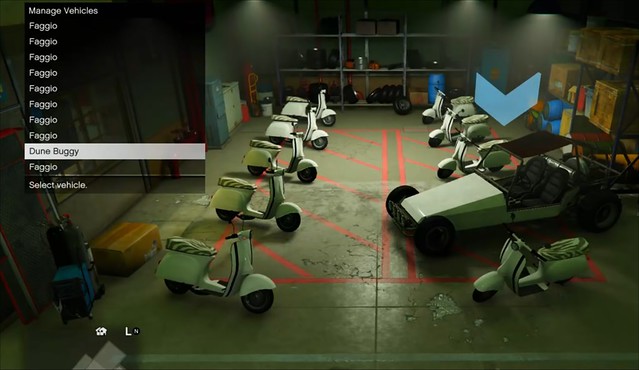 Take the car you want to duplicate outside and destroy it. Head to the motorcycle club and get on the Faggio in the first garage slot. Hit Triangle and right on the D-pad at the exact same time (that’s ‘Y’ on Xbox and the right D-pad button).

Proceed to open your phone, go to the SuperAutos.com website, and scroll to the Principe Faggio for $5,000. Proceed to highlight the first slot of the Faggio in your motorcycle clubhouse and then get on the Faggio and then press start. It should move you toward the customization area and the first Faggio you were riding on will disappear.

Next, open your phone and call up Mors Mutual Insurance to replace the car you originally destroyed.

Head over to the Dune Buggy while you’re still in the clubhouse. Get inside normally and it should automatically drive you over to the customs area but the car should be invisible.

Make a simple modification on the car – in the video, he resprays the Dune Buggy a different color.

It should show you exit the customs area on the Faggio but you’ll end up in the Dune Buggy.

The car you destroyed should be ready. In the video, he suggests starting a contact mission and then backing out of the mission. The car should be spawned near the sidewalk.

Drive the spawned car to the LA Customs and change a single part. Then proceed back to the garage where you originally had the car stored. You will realize that the car has been duplicated. You can rinse and repeat this method to keep duplicating cars until you fill up your entire garage.

According to the video, this glitch bypasses the 45-minute wait so you won’t have to sit around waiting after you sell each car.