GOG.com recently gave away lots of free copies of Double Fine Productions’ re-release of Grim Fandango Remastered. The giveaway, which took place during the holiday sale, saw tons of gamers who either already owned the game back when it was on discs, and tons of gamers who had never played the game, getting their hands on the classic, LucasArts point-and-click game. Well, for those of you who are newcomers to Grim Fandango and you’re looking for a few quick tips to help get you started, there’s a Grim Fandango Remastered gameplay walkthrough available for you.

The game isn’t all that long, but if you’re curious about the game and need some help getting through it, YouTuber Alvin Hekyle has an eight part walkthrough guide available, covering the re-release of the 1998 Grim Fandango from start to finish for a 100% completion, whether you have the Xbox, PlayStation or PC version. You can check it out below.

The game stars Manny Calavera, a salesman who helps the dead cross over to the other side.

Manny is down on his luck, but hopes to get a good gig soon so he can escape from his dead-end job.

First thing is first; take the capsule out of the tube and read about the code three poisoning.

Take the pack of cards in the corner on the table and then leave the office and go talk to the reception.

Talk to the receptionist and ask her about her life. Ask to use her hole puncher if you want to get an achievement.

Go down to the garage and knock on the service door and talk to the big orange mechanic, Glottis. He’ll inform Manny that his assigned driver was given the day off. Talk to Glottis, and try to convince him to become your driver. Tell him that the cars are too small and that he’s not too big. Glottis will suggest modifying your car and he could become your driver if he had a work order.

You’ll need to head upstairs to get a work order in order to convince Glottis to modify the car so he can become your driver.

Ask Eva if she can have the boss sign the work order. The boss will decline. Head out through the main door and go outside. Proceed through the alleyway on the side of the building and climb up the rope to the top floor. Activate the computer and change the auto-response to have Eva sign the document herself.

Climb back down and head back inside the building.

Take the elevator back to Eva’s desk and have her sign the work order.

Manny will give the work order to Glottis, who will fix the car and drive the car to the poisoning.

Interact with the three people at the counter to earn an achievement.

Move over to the body bag and cut it open.

A cinematic will play.

Once the cinematic finishes, head back to Eva’s desk; take out your pack of solitaire cards and use them on the hole puncher.

Exit into the hallway, and then once the conversation ends, proceed outside. Talk to the clown.

Go back into Manny’s office and place the first balloon into the pneumatic messaging tube machine. Place the second balloon filled with the caulk into the tube and it will break the messaging machine.

Keep talking to him until he catches on fire and Manny will attempt to put it out with a magnesium fire extinguisher but the technician will stop him.

Lock the door to the pneumatic messaging machine while it’s still open and then leave the room.

<BR.
The technician will leave and the lock will prevent the door from closing. Go back into the room and use the card with the holes punched in it to stop the messages. Read the message about Mercedes Colomar and another cinematic will play.

Ask her about potential crimes she may have committed until she says she “could do something bad right now” and you will get an achievement for it.

Go talk to the mirror after they stick Manny into the storage room. Tell the mirror that you plan to blow the lid off the Department of Dead for being crooked.

Sal works as a secret agent, and attempts to recruit Manny into the fold.

Go talk to Sal and tell him to open the door. Keep talking to Sal until you can choose to join in on the rebellion.

Talk to Sal until he requests for you to bring some eggs to him.

Talk to Eva again until you can ask her how long she’s been a spy. You’ll unlock an achievement for asking her the series of questions.

Exit from the underground bunker and climb up to the top of the building. Walk around to Dom’s office and go inside.

Try accessing the computer by guessing the password several times until you get the “Arrogant Fraud” achievement.

Pick up th item from the floor below the speed bag. Walk over to the desk and open the drawer and take the glowing hunk of coral.

Head back outside and pull up the rope from the ledge. Use the glowing rock and attach it to the rope.

Throw the rope to the other side of the ladder and shimmy up.

Head up to the rooftop and and go over to the air vent where all the skeletal birds are located.

Use the Robert Frost balloon at the pigeons to get an achievement.

Use the balloon of the cat and brown paper bag on the nearby vent stump to attract the skeletal birds over to the balloon cat. Eventually they will pop the balloon and fly away. Go over to the nest filled with eggs and take the eggs.

Head down into the garage and go into the mechanic room. Use mouth guard from Dom’s office and use the filler on it. Place the mouthgaurd into Manny’s mouth to make a duplicate of Manny’s teeth.

Head back into the underground base and give Sal the eggs. Give Eva the replica of your teeth.

A short cinematic will play where Sal will take Manny through a tunnel to the end of the Petrified Forest.

Go talk to Glottis, who will rip out his own heart and throw it into the forest.

Run over to the heart, which is stuck on the spiderweb. Go over and pick up a bone from the pile and throw the bone into the spiderweb.

After the cinematic plays, drive the car into the next screen on the right.

Talk to Glottis about the tree marrows to earn an achievement.

Move the wheel barrel back and turn off the switch. When Glottis climbs up the tree to balance it out, flip the switch again and it will force Glottis to spin out of control and crash. When the duo gets back into the forest, pick up the sign from the south part of the screen and take it into the leftmost area. Place the sign down. It will spin. Pick it up and place it down again in the center of the map and it will spin again and open up a secret access way.

Go inside and go interact with the sign in the far bottom right corner of the screen. You’ll be able to retrieve an old creepy key from the sign.

Head back into Glottis and get onto the vehicle. Drive the vehicle with the new hydraulics system into the upper middle pathway. Open the door and go inside with the flaming demon beavers. The beaver will chase manny out of the screen. Go back into the screen while the beaver is slightly away and then pick up a bone and walk around to the left side of the screen. Throw the bone into the tar and when the demon beaver jumps in after it, use the fire extinguisher on it. 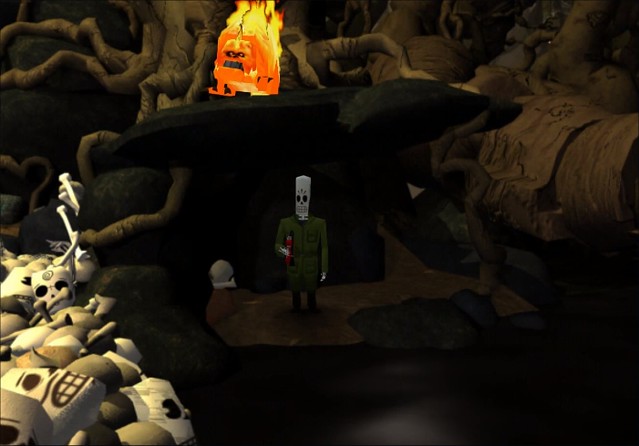 Leave the screen and head back to Glottis and have him drive the vehicle across the dam of bones.

Once the cinematic finishes, go up the stairs and talk to the janitor, Celso. He’ll ask you to help him find his wife.

Exit from the place and head to the right side of the screen. Manny will fall off the edge and a sailor will bring him back.

Go down and talk to Dockmaster Velasco. Ask him about Mercedes Colomar.

Show Velasco a picture of Celso’s wife, and he’ll tell Manny that she left via a boat with another man.

Go back up to Celso and tell him about his wife leaving him for another man. Celso ain’t a fornlorn lover on the bent of a broken mop. This guy picks himself up, dusts himself off, and gives Manny the broom while he goes out in search of his woman.

Manny will end up spending a year working at the Rubacava, eventually becoming the boss of the place, not unlike Casablanca.