Capcom’s Resident Evil 7: Not A Hero DLC expansion is currently available for owners of the latest survival-horror game. The DLC centers around the deflated Chris Redfield and his hunting down of Lucas Baker from the main campaign mode of Resident Evil 7: Biohazard. For gamers in need of a gameplay walkthrough guide for the latest DLC outing for Capcom’s title, which is currently available for PC, PS4, and Xbox One, there’s one available.

YouTuber MKIceandFire put together a multi-part playlist featuring the DLC, which clocks in on average at around an hour and a half. You can view the playthrough for Resident Evil 7: Not A Hero DLC below.

The DLC starts with Lucas Baker receiving a phone call from a company, and he says he can’t help it because they have work to do.

We then switch over to Chris who receives orders from Umbrella to track down Lucas.

Chris heads down into the mine and puts on his Umbrella HMD, which makes him look a lot like Hunk from previous Resident Evil games.

You’ll have four basic weapons from your main inventory with a shotgun, pistol, knife and grenade attached to your digital pad. Move around the bend until you reach some steps and head into the room to check on the other umbrella operative.

After a short cinematic you’ll have to race out of the room and toward the hallway before your oxygen tank runs out.

Race through the next segment with the airborne contamination by getting to the elevator and heading down into the lower levels. Your oxygen tank will refill.

You’ll end up in a hub area with a giant drill where you can resupply and save your game. This is the central mine.

Proceed through the red door.

You’ll encounter another Umbrella member trapped by Lucas, rigged up in a SAW-style contraption.

Go into the elevator and make your way through the quarry. There will be plenty of goop monsters that spawn in the abandoned quarry. You can either kill them all or run past them.

There are a few boxes around the quarry with ammo inside. There’s a green box that has “keys” written on it. If you attempt to take the keys the box will raise. Go over to the mine cart in the corner of the room and there will be a gear. Take it. Place the gear on the pulley system.

There’s also a crank located on a giant wooden spindle. Take it.

Place the crank inside the gear on the pulley system.

Lower the box with the keys in it and take the keys. You can either fight the giant fat, smoking, mutant monster, or you can run away and take the elevator back down to the captured umbrella member.

Go inside and watch him get killed in a violent way, just like in a SAW movie.

Take the air filter from the helmet on his severed head. 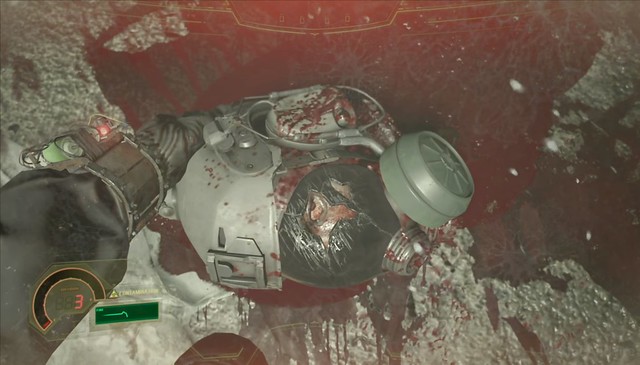 Head back to the central mine and proceed over to the green door.

Make your way through the contaminated tunnels and there should be a partially cracked open door. Go inside and take the RAMRODS ammo and the night vision filter for your HMD.

The RAMRODS will enable you to kill the white mold variants of the mutant monsters.

Proceed through the dark tunnel and there should be three switches in the hive area. You’ll need to flip the two switches on the end to activate the elevator.

A bunch of small mutant crawlers will come out of the hives. You can run past them and make your way back into the elevator.

Through the contaminated corridors, you’ll find that there are rigged guns along the way. They will fire on the mutants and on you if you stand up. If you see the green/red light, make sure you duck to avoid getting shot.

Move through the crypt area until you reach the end. If you get enough coins you can go to the bird cage and unlock some steroids to help get Chris buff again.

This time you’ll need to go into the blue door that leads to the mine cart yard. It’s pitch black so use the night vision to make your way through the area. There are also traps on the ground and laser fields to avoid. Just before you get to the elevator there’s a trip mine that might not show up but you’ll see the red light from the tripwire trigger. Duck under the wire to get to the next segment. Move behind the card and kick it to break through the wall and expose a fat, armless, headless, monster.

Just beyond that is the holding yard.

You’ll be able to get to the next area.

Take the key from the clown station and kill the monsters. Use the key on the clown door in the next hallway and then make your way down the corridor with the laser trip-mines.

Move through the laser field slowly until you get to the power switch. Go deactivate the power on the other side of the room and then help the Umbrella soldier up.

The soldier will get his head blown off. It’s Resident Evil, remember?

You’ll have 10 minutes to get the bomb off Chris’ arm. Head through the red shutter door and move fast.

Get to the liquid nitrogen canisters.

Move through the quarry and through the next area – there are two grenades on the truck and some shotgun ammo in the nearby boxes. Stock up on your supplies before attempting to go forward because if you do attempt to go forward it will trigger a mini boss fight.

Use the grenades on the boss and every other piece of ordinance you can get your hands on. It won’t go down easy, but give it all you’ve got.

Obviously once the boss is dead quickly move over to the liquid nitrogen canisters and disable the bomb.

Take the elevator back down to the tunnel that leads to the central mine shaft.

Activate the smiley clown face to move the drill forward and go inside.

Lucas will force Chris to fight off wave after wave of monsters. Make sure you conserve your strongest ammo for the fat, vomit-spewers.

After you finish fighting off the baddies, move over to the grate in the far left corner after the cinematic plays. You can head under the floor to escape from the burning room.

Proceed into the lab area and kill the monsters.

Take the supplies and then head down the hall. You’ll see Lucas working in the lab. Head into the room opposite of his location and flip the switch. When you go back, Lucas will take off running. When he leaves the room go inside and take the supplies.

When you finally get into the room with Lucas, a cinematic will play and then you’ll have to fight him.

Use your high-powered weapons attack the red glowing parts of his body until he switches to his next form and starts contaminating the air.

You can refill your oxygen if it gets too low, but you’ll want to use it sparingly because you have to wait for the oxygen to refill.

Rinse and repeat until Lucas finally bites the dust.