The Council: Episode 3 Walkthrough And Choices

Big Bad Wolf and Focus Home Interactive have released the third episode for The Council, the dramatic mystery game for Xbox One, PS4 and PC. The Council Episode 3: Ripples, picks up where the last episode left off, and players will find themselves in a rather precarious situation facing down one of the game’s biggest mysteries while also having to deal with the consequences that have carried over from the previous episodes.

Now keep in mind that not every major walkthrough out there will represent your gameplay session given that there are a lot of different minute choices that affect various interactions and relationships. However, some of the walkthroughs should be able to capture the basic gist of the puzzles and important story-altering decisions that will last throughout the remaining episodes of The Council.

With all that said, let’s jump right into it with Beat The Game’s walkthrough for The Council Episode 3: Ripples.

The episode starts with Louis facing off against his mother who has a gun on her. The very first act is to engage in a Confrontation with Sarah De Richet.

You’ll have four steps in the Confrontation, don’t tell her about Lord Mortimer’s letter otherwise you will fail the first step and encounter a blunder.

During the second step of the Confrontation, she will ask you about what was it that she always taught Louis. Louis will start with “Always keep your mind logical…” and the answer is “open”.

The next step will see Sarah questioning Louis about the art dealer in Paris. The answer is: Von Borchert.

If you have enough points in psychology you can answer the next step by addressing the situation about Elizabeth.

The last step she will ask if anything strange has happened to Louis, and you will have to tell her about the visions that Louis is having.

You’ll need to attend the conference on behalf of Sarah. She’ll want you to learn as much as possible while in attendance.

Alternatively, for those of you who failed to follow the clues and reach Sarah, you’ll find George Washington in the conclave instead of Sarah, as pointed out in the walkthrough from YouTuber WiX Gaming.

When you exit the garden be sure to grab all the items that you can while moving through the garden, including a few manuscripts and items.

Enter into the conference room and speak to the guests. You’ll be able to glean a few important details from the guests about Mortimer. Once you get done, talk to Lord Mortimer.

Louis will be able to ask Mortimer about the conference and Mortimer will explain what’s at stake.

You’ll be able to ask Mortimer about the project to expand the United States.

During the conversation, they will begin to talk about Native Americans and Africans being savages and slaves – as Louis you’ll have the option to agree with them or challenge them.

Duke Manuel is abhorred at the idea from Lord Mortimer that Spain should cede control of Louisiana to Washington. If you have unlocked points in politics or linguistics to speak out in favor of the project, you can do so to calm down Duke Manuel.

The first major choice will arise, where players will be able to choose to leave with Sir Gregory or stay in the chamber with Lord Mortimer.

Mortimer will then require Louis to run interference with Duke Manuel Godoy by convincing him to engage in war with France. 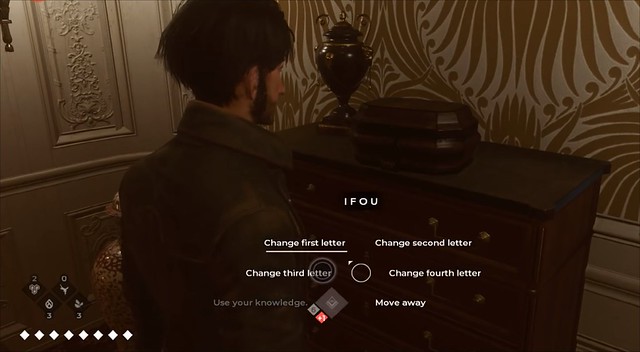 There’s an alchemist book you can read in one of the rooms, along with a locked box with a four letter code. If you have a high enough level in occultism you can unlock it, otherwise you’ll need to input the code manually.

Godoy’s room will be blocked. You can attempt to sweet talk your way inside by convincing him to go inside. Alternatively, enter into the room next to Godoy’s and then exit out onto the balcony and go into Godoy’s room from the outside.

Inside Godoy’s room is a letter written in Spanish. If you have enough points in linguistics, you’ll be able to translate the letter.

Godoy won’t be in his room, however. You’ll need to move through the main foyer from downstairs to reach him. On the desk in front of the fireplace there’s a book by Plutarch that you can take. 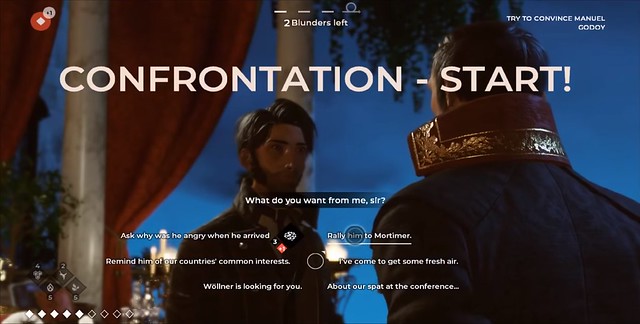 You’ll find Godoy in the musical room off the balcony.

You’ll engage in a Confrontation. You’ll need to ask him why he’s so angry during the first stage.

During the second stage, tell Godoy he can beat Holm.

During the third stage of the Confrontation, tell him that Louisina poses more problems than it brings.

And during the fourth stage, tell Godoy that he can consolidate his position under the court of Spain.

This will allow you to complete the Confrontation and win. Head back to your room and Emily will engage in Louis in a conversation to get him to change sides.

You can choose to change sides or stay with Mortimer. Additionally, Emily will ask if you trust her, which will be a defining moment for their relationship.

After the last chapter ends, Mortimer will want to talk to Louis about Jacques Peru.

Mortimer will also commend Louis for choosing to side with him. You can accept or rebuff his compliment.

Head back to Louis room to trigger the next segment involving George Washington.

Washington will state that Louis’ mother has entered into the Duchess’ room. You’ll need to get into her room.

The room is locked and they won’t let Louis in. You can enter into Napoleon’s room and then exit through the door leading out onto the balcony. Make your way around to Emily’s room and you’ll need to be able to distinguish between Emily and Emma.

You’ll need to ask Emily/Emma certain questions, but both of them will know the answers. Ask Emily in the front about their intimacy and choose to tell her about the reason she visited Louis the night before. This will reveal that Emma is behind Louis and Emily is in front of Louis.

Emily will shoot Emma and Louis will have to exit the room.

Sarah will explain that demons are on the island. You’ll be able to choose who the demons are. The demons are: Mortimer and Holms

Discuss all of the topics in the dialogue option.

Sarah will explain how Mortimer is a demon and that they stole his son in Venice. Sarah will also explain that Elizabeth Adams was also possessed by a demon.

You’ll be able to ask a number of questions about Mortimer and the demon and what Sarah was doing before moving on to the next chapter.

Episode 3: The Trial of Faith

There’s a number of items you’ll need to collect in order to complete the task, including a cross, some nails and the Exegesis of Judas.

You’ll need to gather three nails and the Exegesis of Judas from Mortimer’s secret room.

Go back into the study with the Gorgon statue and turn the Gorgon head toward the shield. This will open the secret wall.

Go into the glass case and take the Exegesis of Judas.

Head up to Mortimer’s study and for the secret room, input the code: 1191
To exit the room remember to use the code: 6466

Lower the lever and enter into the secret room. You’ll find the three nails on the desk by the tarot cards.

Head back downstairs and you’ll find The Bible located in George Washington’s room on the second floor of the mansion, highlighted in the image below.

The Bible is on a desk under the painting.

Meet with the Priest in his room and ask him about the cross of Clement III.

An impromptu Confrontation will commence, but you will only have one chance to get the cross. However, if you tell him that “nothing” is happening, you will lose the Confrontation.

Alternatively, you can find another cross of Clement III inside the crypt – you’ll find it at the corner of the crypt among the pillars.

Talk to the Duke and he will inform you that Wollner has an Armillary Sphere. Go into Wollner’s room and take the sphere.

Once you get all the items bring them back to the crypt where Sarah is located.

Place the Cross inside the tablet on the table.

You’ll need to figure out the specific dates in order to unlock the first aspect of the map. You’ll need to highlight the nails on the notches of the wheel at XIX, 17, and on Golgotha, as indicated in the image below. 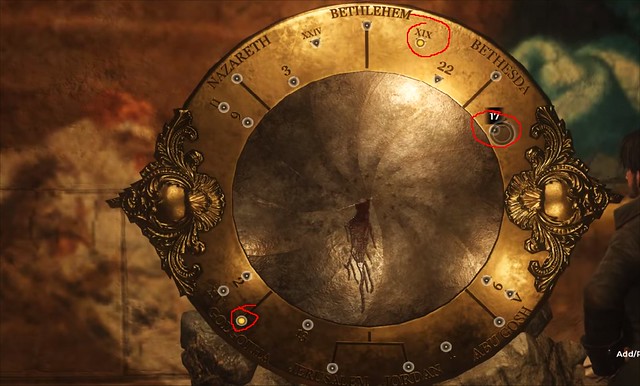 From there, you’ll need to align the wheel with the dates, icons and moons.

If you fail the trial of faith Louis will have his arm cut off. 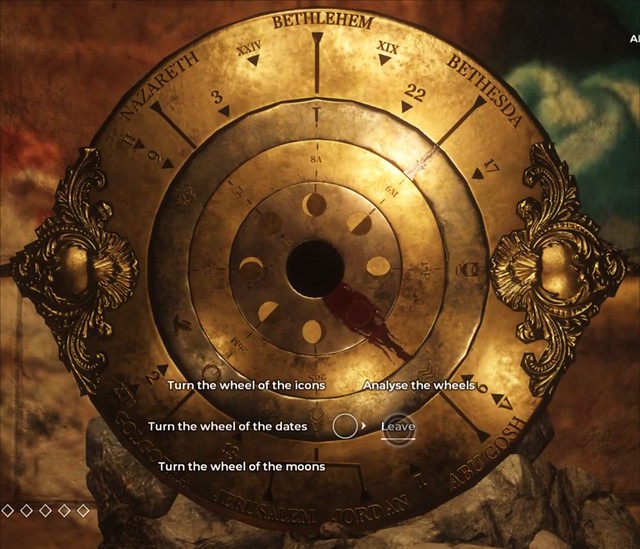 So just to recap:
The wheel of the icons should see the ‘T’ symbol facing north pointing toward Bethlehem.

The wheel of the dates should have ‘8A’ pointing north toward Bethlehem.

The wheel of the moons should have the full moon (covered in blood) facing southeast.

If you did it correctly, have Louis stick his hand into the hole and press the lever to complete the episode.