The Council: Episode 5 Walkthrough And Choices

Focus Home Interactive and Big Bad Wolf released The Council: Episode 5 – Checkmate in late 2018 for Xbox One, PS4, and PC. The fifth and final episode wrapped up the first season of the game with a startling, choice-based conclusion to the events that unfolded over the course of the story. If you needed a little help with some of the choices and puzzles, this walkthrough guide for The Council: Episode 5 might be able to help you out.

There are multiple videos and walkthroughs available covering the different types of possible scenarios within the game depending on the choices you made in previous episodes. You can check out the video below from ILLUMINAT3D covering their events of the fifth and final episode of the season.

At the start of the episode, if you’ve aligned with Lord Mortimer in Episode 4, you’ll need to attempt to convince the other members of Sir Gregory’s side to join Lord Mortimer.

If you visit Wollner’s room he won’t be in there. If you visit Giuseppe Piaggi in his room, he will question Louis about the possession, but you can deflect during the Confrontation by saying “God is with you”.

During the second part of the Confrontation, you will have only one chance to convince Piaggi to join Mortimer’s side. Simply tell him that you will “lead the way” and he will cede his position to Mortimer’s cause.

Head to Godoy’s room next, and he will very readily join in on Mortimer’s plan without Louis having to do much to convince him at all.

If in the last episode you talked to Emily about being her sibling, the discussion will go rather linearly, and Emily will note that she will vote for Mortimer’s project.

Head back upstairs to Godoy’s room and possess him.

Exit the room and interact with Sir Gregory and Wollner. 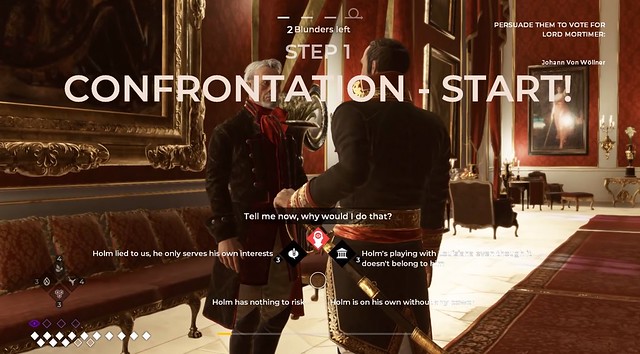 First, use the power of observation to note that Wollner has been outside.

During the Confrontation with Wollner, tell him that Gregory Holm only serves his own interests.

You can also use the daemon power to read Wollner’s mind to find out that Wollner is Sir Gregory’s son.

This will win you the first two stages of the Confrontation.

For the third step, tell him that he has already had dealings with people above, to succeed in the next step, and for the final step tell him that all the guests already serve Mortimer to complete the Confrontation.

Go talk to Mortimer once you’ve finished persuading everyone.

Alternatively, there’s a waklthrough from AMHarbinger that covers the other side of the coin where Louis works with Sir Gregory to retain the vote against Mortimer.

Working with Sir Gregory Holms, you’ll need to confront Wollner, and you’ll have the choice of either attacking him or not taking revenge.

Emily’s interaction basically stays the same as when you were working with Mortimer.

When you talk to Piaggi, read his mind to find out that Piaggi will be switching sides and voting for Mortimer, but you can use manipulation to get Piaggi to admit that he betrayed Sir Gregory Holms. You’ll be able to promise to keep his betrayal a secret or not.

If you’re working for Sir Gregory Holms, you’ll need to take over Napoleon’s body to talk to Godoy. Use Napoleon to further convince Godoy to vote for Holms. Go back to Sir Gregory Holms and you’ll have the choice of ratting out Piaggi and Von Wollner.

During the conference you’ll be able to vote for or against the project, which will lead into a cinematic where Mortimer will reveal he poisoned Sir Gregory’s tea.

You’ll need to place Emily next to her sister Emma, with Louis standing next to Emily.

The characters should be aligned as they appear in the image above.

Exit from the foyer through the painting, and you’ll end up in the room with Emma. You can either choose to help her or promise her nothing.

When you get done talking to Emma, exit the painting and you’ll need to restore Sir Gregory’s fragmented memories.

Exit through the painting and enter into the room with Elizabeth, where you’ll need to ask him about Elizabeth and then inform him that Gregory has been poisoned by Lord Mortimer.

It turns out that it’s actually Gregory and Mortimer’s Father, who reveals that the core rule is that a family member cannot kill another family member. 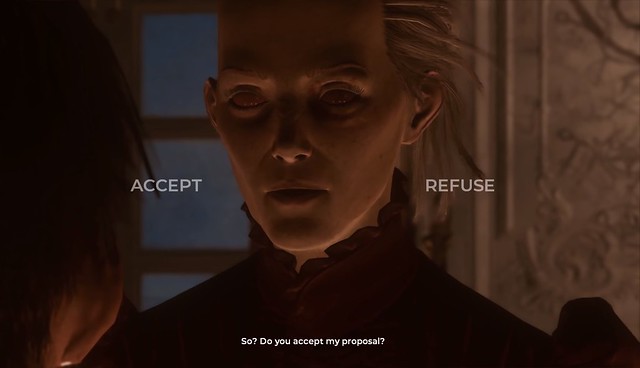 Louis will want to escape from the Father’s presence, but he will be given a proposal where you can either accept it or reject it, which involves the Father wanting to deal justice to Mortimer for betraying the code.

Once you’re back in the fragmented memory area, you’ll need to follow Gregory’s memories to place them in the right order.

Find the painting fragment that mentions that Gregory knew Mortimer knew about the Hillsborrow sisters were brought to the island four years after the previous conference.

Find the painting that talks about allowing them to gather on the island.

Head to the painting that talks about who arrived at the island the same time as Emily, and follow that memory.

Go to the painting with the chess board where Mortimer says “I’ve been called Spartacus” and follow that memory.

After the cinematic you will enter into a Confrontation with the Father to prove Louis’ innocence.

During the first phase of the Confrontation, simply tell him that Louis fell into a trap.

In the next phase, tell him what he wants to hear or respond with no.

For the final step, if you have enough points tell Father “I know your rules”, otherwise select “Bury him alive”, since the rules dictate that they shall not kill.

At the end of the game there’s an epilogue that recounts the various outcomes for each of the main characters in the game before the credits roll.