Sega and Eden Industries’ follow-up to Citizens of Earth called Citizens of Space is an Earthbound-inspired RPG romp through the galaxy featuring a colorfully inviting art style and a wacky cast of characters that seem like they were plucked right out of a Douglas Adams novel. The game is currently available for Nintendo Switch, PS4, Xbox One, and on Steam for PC, but if you’re interested in doing a little bit more than exploring the deepest depths of the universe’s crevices, hot spots, dark pits, and areas where even the brightest suns don’t shine, there are some cheats to help you mosey on your way to galactic infamy.

The first cheat trainer for the affably bright RPG comes courtesy of Megadev.info.

The Citizens of Space cheats are listed below:

Now some of the cheats from the Megadev trainer are free while others will require you to become a member. Thankfully the infinite money cheat is free, so if cash is a problem for you in the game, the trainer will solve that issue for you right quick.

There’s a second batch of Citizens of Space cheats that you can grab as well.

VGTrainers has a free cheat table for the cheat engine that you can acquire, courtesy of ImpalaPUA.

The table includes the following Citizens of Space cheats:

Items never decrease (should be fixed for key items)

Gain items when you sell it (good for duping items, don't leave enabled)

Shiny Collected count (Pick up shiny to activate, set above 1000 to recruit the janitor) 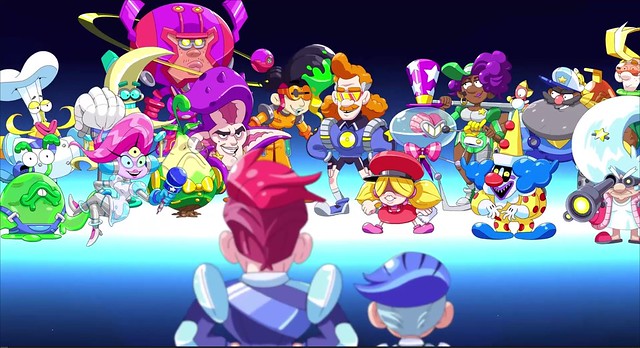 The game itself takes all of the irreverent concepts from the original Citizens of Earth and extrapolates them into a grand-fantastic space adventure where you’ll play as the Ambassador and an off-the-cuff collage of colorful characters who will help find out where the Earth has gone after it goes missing. You’ll also have to work your way up the intergalactic social ladder to best represent the citizens of Earth as its official ambassadors while defeating bad guys, exploring alien planets, and making acquaintances with odd species.

The game hasn’t really taken off on Steam for some odd reason, maybe it’s because a lot of people just don’t know it exists? Then again there are also complaints on the PC side of a lot of game-breaking bugs. Thankfully Eden Industries are aware of the complaints and even recently addressed them in a bug-chasing thread over on the Steam forums.

The game is currently available over on the Steam store for just $14.99. You can also grab a digital copy for the Nintendo Switch, PS4, or Xbox One. For more info feel free to hit up the game’s official website.