A lot of people probably forgot about Mobius Digital’s The Outer Wilds since it launched on the Epic Games Store for PC and nobody cares about the Epic Games Store. A lot of others also probably forgot about it even though it launched on the Xbox One as well, mainly because nobody cares about the Xbox anymore. Even still, if you needed a little help beating the game, there are some walkthroughs available.

The first Outer Wilds gameplay walkthrough basically shows you how to beat the game in under 30 minutes. Impressive, right? Well, you can check it out for yourself courtesy of YouTuber AJBRUN.

The game starts with the player-character waking up.

Once you wake up, turn 90 degrees to your left and head toward the rocky platforms lit by the lanterns on the ground.

Head all the way up and around the platform and then leap off to the ground below at the edge of the railing.

Proceed across the rickety wooden bridge and follow the sign that says “Observatory” across the other bridges that lead up through the small village and around the bluff where another sign points toward the observatory.

Follow the pathway all the way to the op and then make a 180 turn when you reach the top and head toward the small plank bridge across the waterfall. 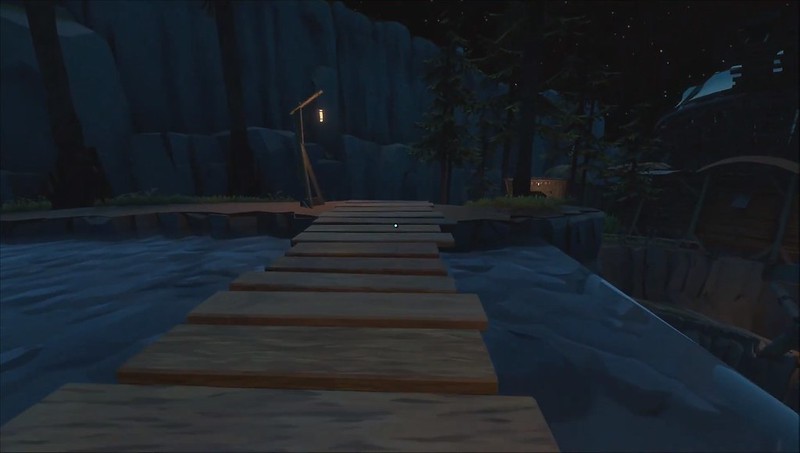 Head to down and into the wooden observatory and then proceed up the spiral ramp to the top of the observatory. Talk to the alien dude and tell him “I’m gonna wing it!”

Tell him you’re ready to “get off this rock!”

Head back down the ramp and then use the translator by holding down the right bumper on the broken wall just to the left of the ramp when you came down from the observation center. 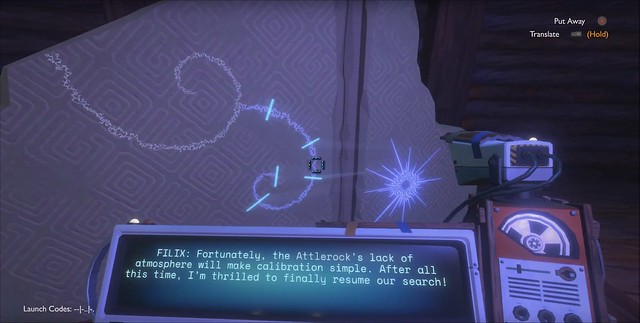 Use the Signalscope by pressing ‘Y’ on the Xbox One controller on the multi-eyed alien bust in the next room called Nomai.

The eyes will open and absorb your memories.

When it gets done eye-raping you, head outside and talk to the ugly little alien thug on the pathway descending from the observatory.

Tell him the “statue was glowing”.

Select the top dialogue option as the next response, and then proceed down the pathway.

Keep heading down through the escarpment, and then go to the lift just to the right of the bonfire.

The lift will take you up the spaceship.

Go over to the navigation and select Attlerock. Head to the helm and navigate to the planet. 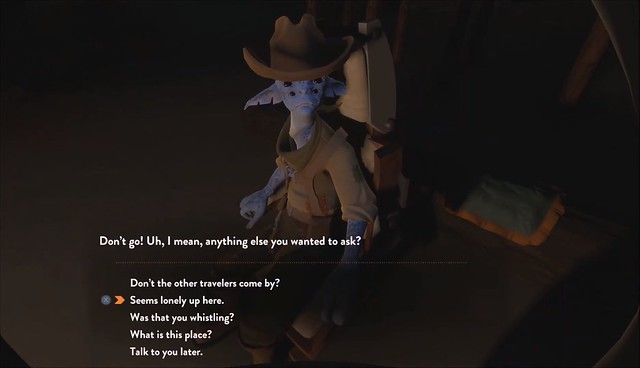 Exit the ship and talk to the alien in the rocking chair by the fire. Select the first dialogue option and when he asks you if there was anything you wanted to ask, tell him “It seems lonely up here”.

Then proceed to ask him what he was whistling, and he’ll point you to the north pole on your mini-map.

Go back into your ship, navigate and lock onto the Ash Twin orbiting around the sun. Send a scout to the ash Twin and then land on the sandy part of the planet.

Exit and proceed to a cylindrical ruin. Wait for the structure to rise out of the sand and a doorway will appear. Wait for the second planet to came around again and then proceed into the doorway while the sand is being sucked up to the second planet and there will be a portal you can go into – you have to act fast, though, otherwise you’ll miss it.

Once inside proceed to take out the translator and read the translations on the side of the wall. 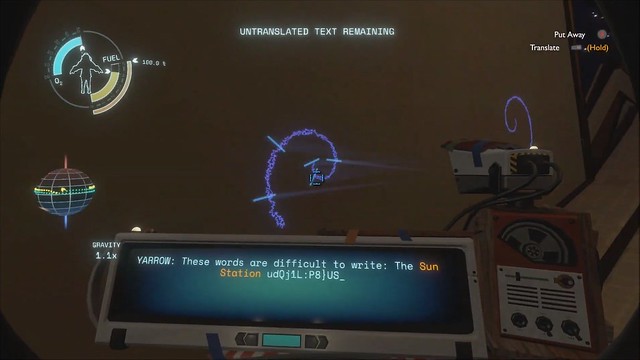 Go over to the part of the area where a blue orb will roll towards the iron tube, and wait for it to reach the top. Use the jetpack to take the warp core by pressing ‘X’ on the Xbox One controller.

Head back through the teleporter in the first room and return to your ship.

Exit the planet and use your star map to navigate to Dark Bramble.

Carefully navigate into the nexus of the Dark Bramble and slowly proceed toward the red light.

When you get close enough to the opening, exit the ship and go into the red light. Inside, you’ll find some creatures floating around. Continue toward the red light.

When you reach the red light make a right and proceed through the spiky vines.

What you’re looking for is a glowing cluster with light emanating from it – go inside. 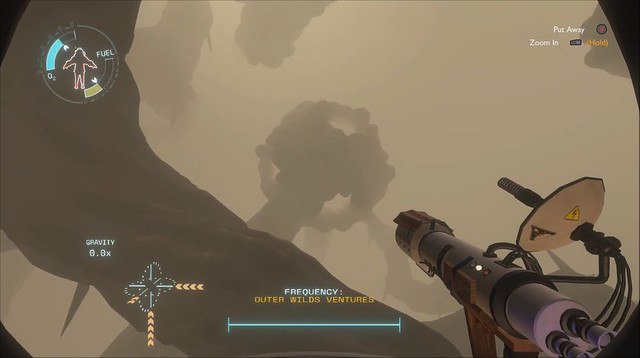 Once inside, proceed toward the electric node with the skeletons floating about. Head into the corridor and place the warp core inside the mechanism.

Head to the tablet and complete the puzzle by moving the blue node around the block. The first one should be shaped as it appears in the image below. 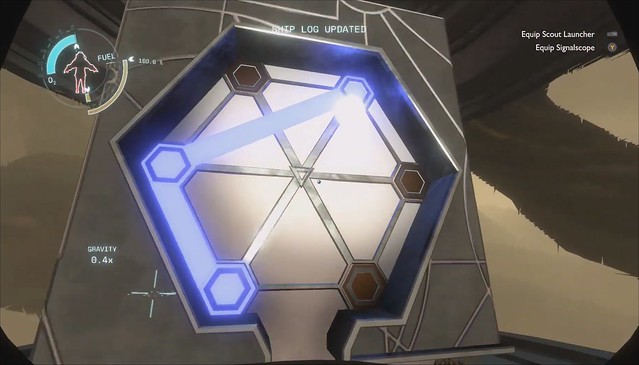 The second block should be in an hour glass formation, starting from the bottom left and working your
way to the bottom right. 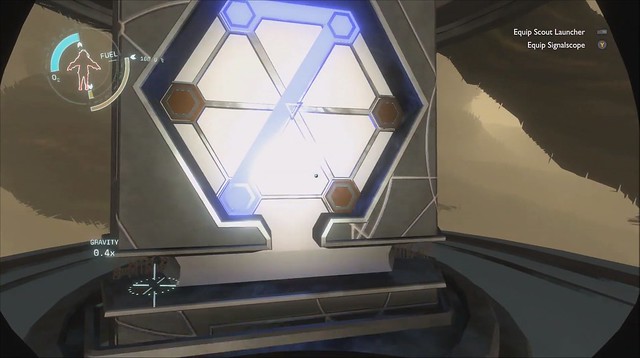 The third block should start from the bottom left and work all the way around to the top right, as depicted in the image below. 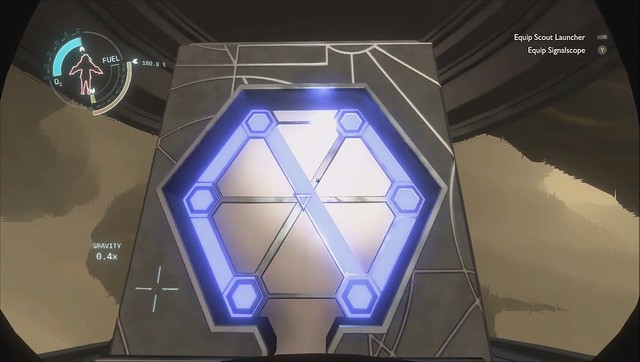 This should complete the warp core puzzle. Once you finish, the block will descend and the blue orb will teleport you to a new location.

There’s another blue orb in a contraption once you get out of the teleporter; you need to move it around to the other side of the floor and it will teleport you to a dark void.

Turn around and proceed south.

Keep heading south until you reach the trees – this will refill your oxygen.

Keep heading south until you reach the south pole – there’s a giant crater. Head into the crater but move up the wall until you fall into a dark hole and end up falling back into the empty observatory. Head to the top of the observatory up the ramp and press ‘X’ on the diorama at the center of the room.

The map will zoom all the way out so you can look at the entire solar system.

Jettison back toward the solar system and it will warp you to a forest full of tress and small sparks of different galaxies. 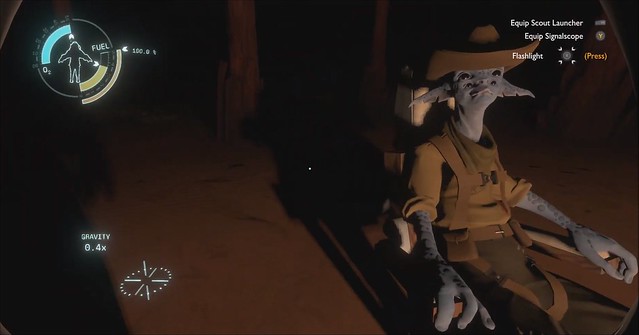 Talk to the alien and he will ask you “Do you hear music?” Use the Signalscope to track the sound of a banjo playing to a dilapidated structure made of sand stone.

Go inside and interact with the banjo.

Head back to the campfire and there will be another traveler with a banjo. Use the Signalscope to track the sound of drums just beyond the camp site, and then zoom in to see the floating bongos in space.

Another instrument will play and you’ll need to track it down using the Signalscope.

It’s an accordian that leads to the mouth of a monster. Follow the sound until you reach the item on the tree trunk.

Next up is an oboe, which is located up in the trees.

Go talk to all the travelers by the campfire who will begin to play their instruments. 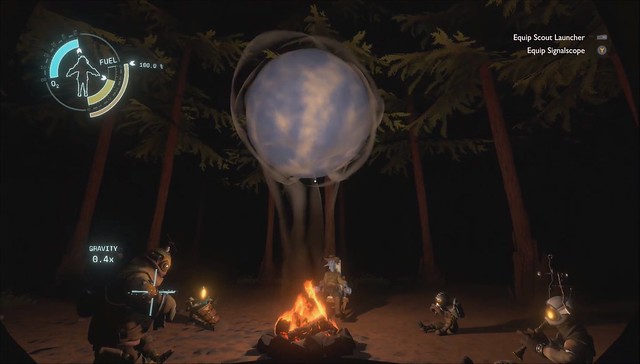 Once they all start playing the music, wait for the planet to grow and then jump inside once it’s big enough. After that the sun will explode and the game will end.