More content creators are being copyright struck by Sony and Naughty over The Last Of Us: Part II leaks. The worst of it all is that the copyright strikes are being levied against people providing nothing but commentary about the leaks and discussing the censorship that Naughty Dog and Sony are enacting to cover up the leaks.

Lethal Lightning, a YouTube content creator who also contributes to the Geeks + Games team, received two copyright strikes for simply talking about Sony’s censorship and their abuse of the copyright strike and DMCA system.

He revealed the copyright notices with a couple of cheeky tweets aimed at Naughty Dog.

If you’re unable to view the image in the tweet, it shows that he’s received two of three copyright strikes. As many of you know, if you receive a third strike it results in the channel being terminated. 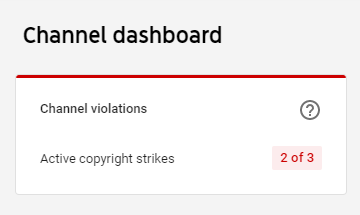 The irony of Lethal Lightning’s copyright strikes is that just earlier in the day on May 3rd, 2020, he posted up a video titled “Naughty Dog Is Trash”, and he lambasted them and Sony for issuing copyright strikes against content creators, but also informed his audience that he was thankful that he wasn’t on the receiving end of a copyright strike.

Lo and behold just hours later he was on the receiving end of two copyright strikes.

Other content creators also came out to voice their displeasure at Naughty Dog for allowing Sony to go nuclear on any and everyone talking about the leaks.

What the @Naughty_Dog!!!! You copyright strike @LethalLightnin over a video where he is just critical of you and your abuse of copyright laws.

There are, however, some shills out there telling people that it’s not Naughty Dog’s fault that channels and content creators are being hit with copyright strikes and DMCA notices. They’re saying that only Sony is issuing copyright strikes, not Naughty Dog. However, Naughty Dog is completely within their power to make a public statement denouncing the copyright strikes, but they haven’t. In fact, they’ve neither condemned nor rebutted Sony’s aggressive measures to cull any criticism or discussion surrounding the leaks.

But it wasn’t just Lethal Lightning who got hit.

As we’ve reported, Geeks + Gamers was also copyright struck along with many others. HeelvsBabyFace is another channel that also got hit even though he had no footage of the leaks in his videos nor did he show any images from the leaks.

Attempting to rectify the situation through YouTube’s convoluted copyright system has also proven to be futile for some users.

The copyright counter-notice claim was reported to be ineffectual for one content creator going by the handle of Mirta.

According to Mirta, YouTube wouldn’t even allow the counter-claim form to go through.

I have submitted it again, but I can’t fight something that youtube doesn’t even allow to go through. pic.twitter.com/QL6NBu7O9V

While some of the videos being copyright struck come from a third-party legal firm working on behalf of Sony, some of the copyright claims are coming directly from the Sony Interactive Entertainment of America branch.

I’m sure fanboys are huffing and puffing and making excuses claiming that that’s not possible, but evidence was provided by YouTuber Just Some Guy, who was also hit by the claims.

Just a minute into the video there’s an image of the copyright summary and status for the video that Sony flagged.

If you look at the bottom right hand corner of the image you’ll see that the flagged content comes from the copyright owner that’s listed as “SIEA”, which stands for Sony Interactive Entertainment of America. 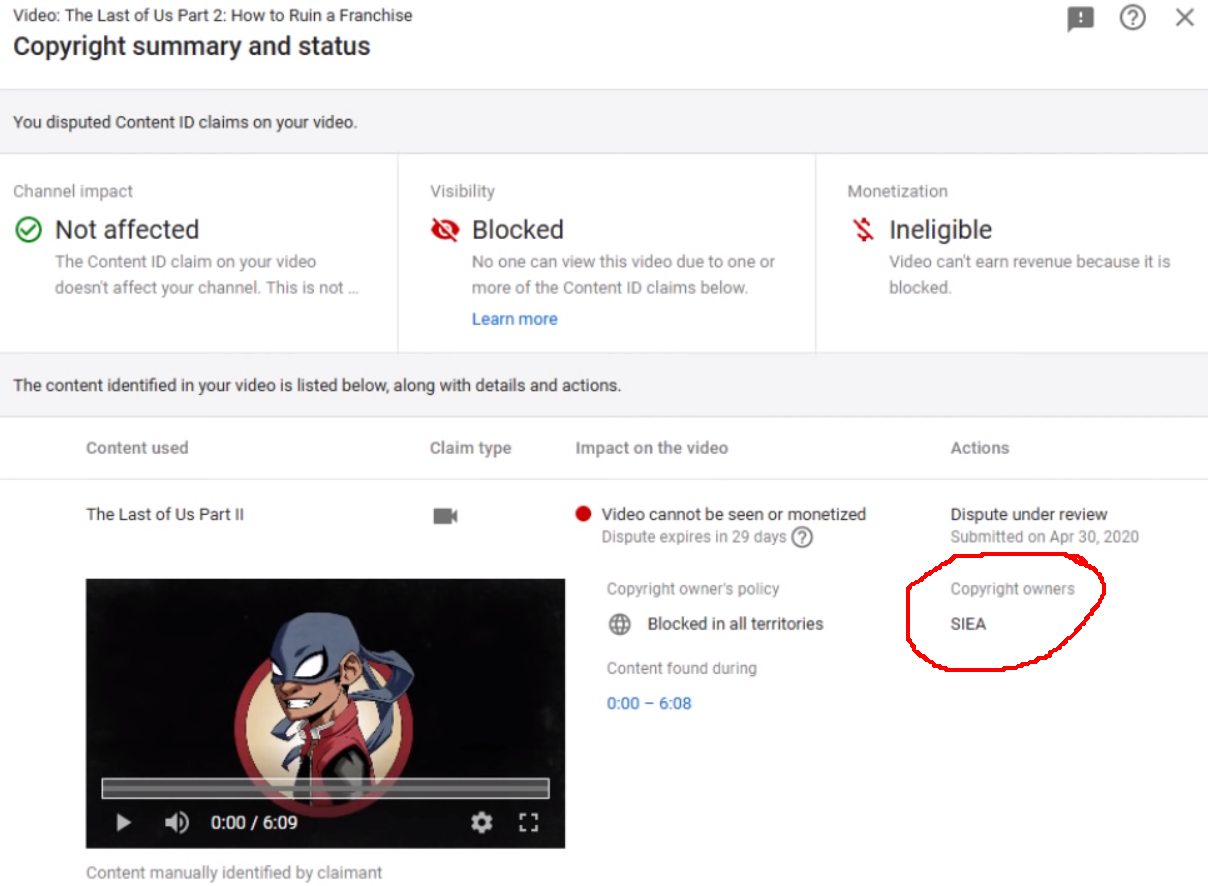 Just Some Guy also noted that even posting content about the leaks on BitChute resulted in Sony coming after him on there, too.

Bitchute later attempted to clarify what was happening with a follow-up tweet.

no that is the original, is was blocked for a while until we understood better what was happening with the manual claim. See your emails.

As we reported before, even parody videos made in other games about The Last of Us: Part II leaks are being copyright struck.

One content creator attempted to mock Naughty Dog and Sony using GTA V, but even that video was struck.

Got a copyright false strike for uploading a GTA V video without the last of us assets this is illegal . spread the word #thelastofus #naughtydog @thelastofus pic.twitter.com/shTwowgZWa

Sony and Naughty Dog have also been going after memes on social media such as Reddit, where they had images taken down and accounts flagged for posting up parody images of The Last of Us: Part II.

Now some users are reporting that the duo have escalated the DMCA abuses to actually have accounts on Twitter suspended.

Basically, no where is safe and you’re not even allowed to discuss the censorship being enacted by Sony and Naughty Dog.

(Thanks for the news tips Animatic and GameWizard02)