Genshin Impact Overpower Support – 5 Reasons why you must gacha Kazuha

Apart from his status as the first character of Genshin Impact from Inazuma, Kaedehara Kazuha has various advantages. Kuy gacha!

Genshin Impact has just released its newest B5 character, Kaedehara Kazuha. He is a character that fans are eagerly waiting for due to his origins as an escapee from Inazuma. Yep, Kazuha will be an “intermediary” for Travelers to enter the new region which is planned to be released in the next update.

Apart from his role in lore as the first character from Inazuma, don’t forget his status as a B5 character. Kazuha certainly has more special powers than the B4 character. However, how does he compare to other B5 characters, specifically fellow Anemo characters like Venti, Jean, or Xiao?

Well, for those of you who have Primogems or Fates savings, KINCIR will give an explanation of why Kazuha can be the best support and Sub DPS character for you. Let’s see the discussion below!

5 Reasons to have Kazuha in Genshin Impact 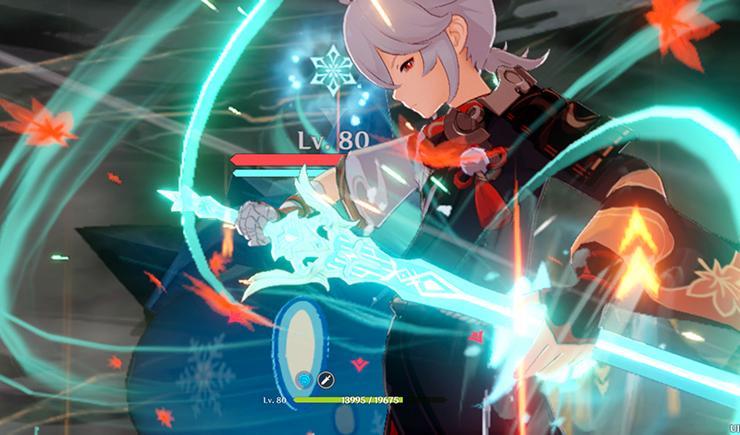 As an Anemo character, Kazuha has a special ability to increase the damage output for the party. Apart from Swirl’s reaction to his Elemental Skill and Burst, he has passive Talents that can increase elemental damage by 0.04% based on his Elemental Mastery achievement.

The Elemental Mastery buff that Kazuha gave was not as big as Sucrose. However, as support, the additional damage given by the samurai is greater. All thanks to Elemental Burst which produces a wide area of damage and Swirl reactions every second with a duration of 8 seconds.

Just like Burst in Sucrose or Venti, Burst Kazuha can absorb Pyro/Hydro/Cryo/Electro elements. This ability will also give bonus damage every second according to the element it absorbs. 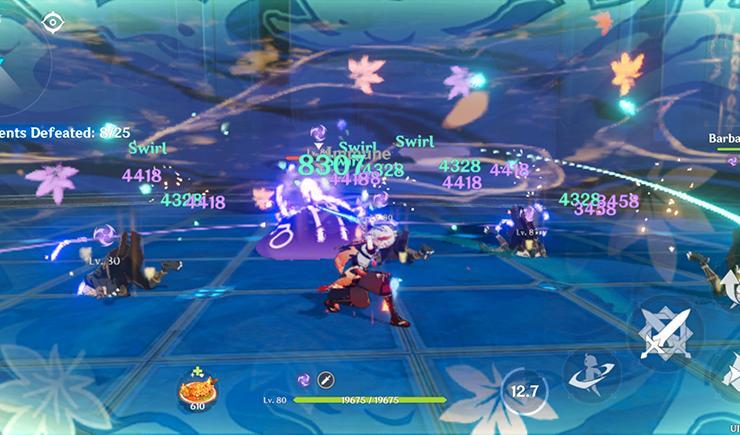 The DoT (damage-over-time) effect on Kazuha’s Burst is certainly more special than the DoT effect on Albedo’s Elemental Skill. Because, Albedo can only produce DoT and Crystallize reactions, while Kazuha can produce Swirl reactions and absorb other elements.

When fighting, this ability will certainly be very useful for DPS characters who rely on elemental attacks such as Hu Tao, Ganyu, Diluc, Childe, and so on. You can also produce Elemental Reaction combinations to be able to produce greater damage. 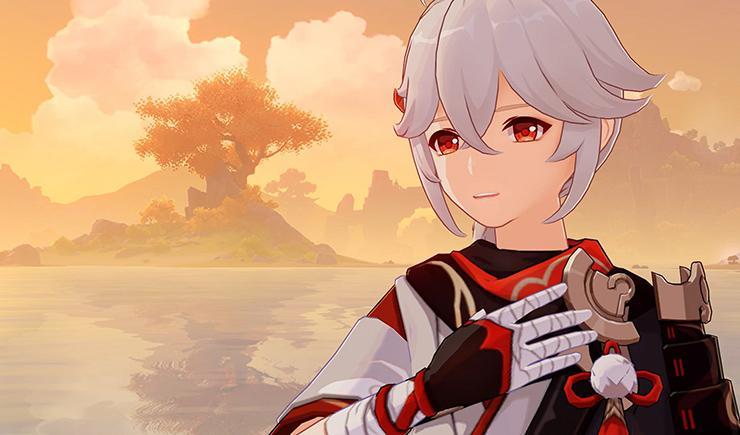 In the previous point, it was explained how much Kazuha’s OP Elemental Burst can produce extra elemental damage to enemies with a fairly wide attack area, as well as buffs for the Elemental Mastery team. Well, all of these criteria made Kazuha have enormous potential to succeed in the Spiral Abyss on the top floor, Floors 11 to 12 to be exact.

As you know, the top two floors of the Spiral Abyss are quite difficult to complete if you don’t bring a character with a variety of elements, especially the four main elements (Pyro/Hydro/Cryo/Electro). The reason is, the enemies on this floor can produce shields that must be broken with certain elements such as Fatui’s “brothers” or the Abyss Herald/Lector.

Kazuha was not a character from the four main elements earlier. However, its role as a buffer is potentially OP in Spiral Abyss Floor 11-12 through Elemental Burst with wide-area attacks and DoT which produces elemental attacks.

When fighting Fatui’s brothers, for example. Kazuha’s Elemental Burst will be more effective because of its large area and its annoying DoT. With this, you can get rid of them faster than having to beat them one by one. He can also inflict additional damage with his Elemental Skill which can also absorb elements and Swirl damage which is quite large.

It should be noted, Kazuha’s Elemental Burst doesn’t have a crowd control (CC) effect as good as Venti or Sucrose. So, don’t be surprised if this ability is less effective on Spiral Abyss Floors 9-10, which prioritizes CC.

3. Has Potential As DPS 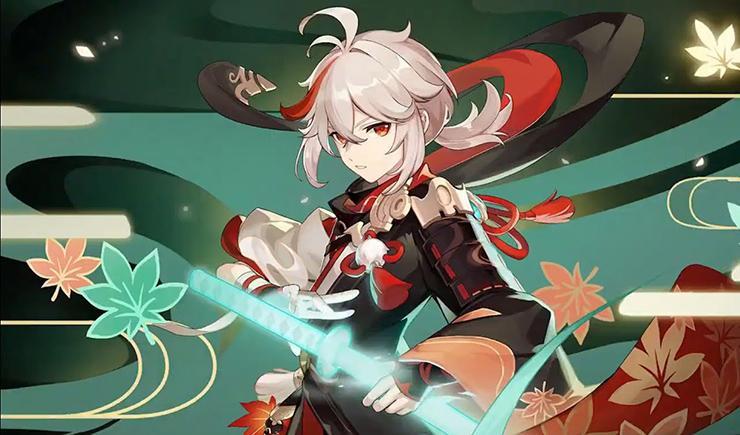 Another advantage of Kazuha is her skill-set which is very flexible. The samurai is actually plotted as a supporting character or Sub DPS. However, he also has considerable potential to be used as a Main DPS.

There are several factors that make Kazuha your main character. One of them is an Elemental Skill whose damage is quite large. Moreover, this skill can absorb other elements and produce extra damage as long as you have activated the Soumon Swordsmanship passive Talent.

Not to forget, Kazuha’s Elemental Skill also has a capable CC effect. When activating this skill, the samurai will create a vortex that can blow away enemies such as Elemental Skill Venti. This ability will certainly be useful for defeating a group of enemies.

In addition, if you have more luck, chasing Kazuha up to C6 is highly recommended. Because the sixth constellation makes Normal Attack produce Anemo attacks for 5 seconds. His damage will also take his Elemental Mastery points by 0.2%.

Just like Anemo characters in general, Kazuha is a very capable energy charger for the team. Because Anemo has a special characteristic to produce extra energy particles.

As long as he continued to use Elemental Skills or Burst, the other characters’ energy would fill up faster. Moreover, Kazuha’s Burst is DoT so she can generate energy constantly as long as the enemy is hit.

This ability is suitable for party compositions with main characters who rely heavily on Elemental Burst. Call it Xiao as Main DPS Anemo whose Burst cannot replenish energy or Eula whose Burst energy consumption is large.

In order to replenish energy faster, don’t forget to use the character swap tactic after Kazuha uses Elemental Skill and Burst. So, before the energy particles return to Kazuha, immediately switch the character you want to fill in with energy. 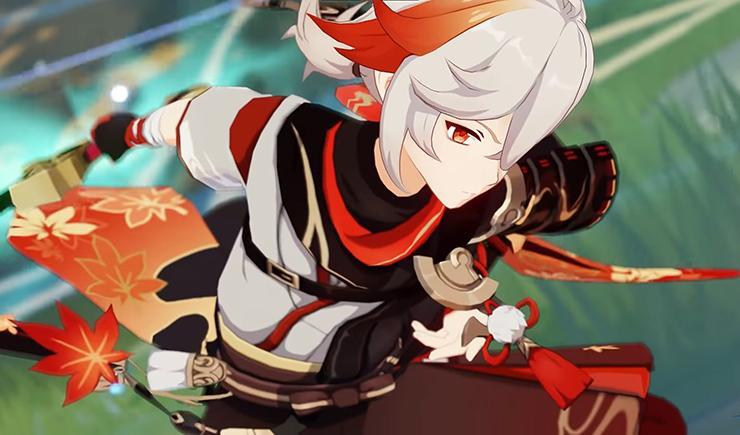 Like Klee, Kazuha also has abilities that make it easier for you to explore the world of Tevyat. If Klee can bring up the resources icon on the minimap, Kazuha has a special ability to reduce stamina consumption by 20% while sprinting.

In addition, you can also take advantage of the flying effect on Elemental Skills. You can also more easily reach certain places such as high cliffs or take the elusive Crystalfly.

Those are some of Kazuha’s advantages that should be your consideration for those of you who want to burn Primogems and Fates. I hope you are lucky and can get it, yes. Also, follow https://www.oneangrygamer.net to get interesting information and the latest news about Genshin Impact!