YouTuber Coffee Break did an expansive breakdown and data scrape of YouTube trends covering 40,000 videos between November 2017 to June 2018 in order to understand some of the implicit and explicit biases that YouTube may be showing to certain channels, topics, or categories, and it turns out that there absolutely is a bias that YouTube is showing towards a certain selection of videos, and it’s specifically mainstream news media.

Now the research behind the trending data scrape did have a couple of hiccups. The bot collecting the data crashed for five days, but it’s noted by Stephen from Coffee Break that the five day loss didn’t impact the overall data scrape all that much. There was also some unknown variables that could have accounted for trends relating to comments, likes/dislikes, and shares, but majority of the focus was on view trajectory and content classification. The results, however, are absolutely not surprising nor stunning at all.

You can check out the eight minute video below from Coffee Break where they reveal that YouTube’s bias for video trends – especially in the news category – is basically aimed at pushing mainstream media propaganda front and center above all else.

So there’s a lot of information thrown at viewers in a very short amount of time, but the general gist of it is that certain YouTubers are purposefully prohibited from trending in the United States.

The data shows that PewDiePie, Joe Rogan, H3H3 Productions, Philip DeFranco, KSI, and Logan Paul are all on YouTube’s naughty list when it comes to trending in the United States. As the data set shows, all these channels trend very much outside of the U.S.

You know what doesn’t have any trouble trending in the U.S.? Mainstream news media. In fact, 95% of all news channel trends are from traditional mainstream media outlets. This includes CNN, Washington Post, CBS, ABC, and NBC to name a few. They also trend rather easily even with a very low number of views. So while PewDiePie might need several million views in a short amount of time to trend, CNN or CBS only need several thousand. 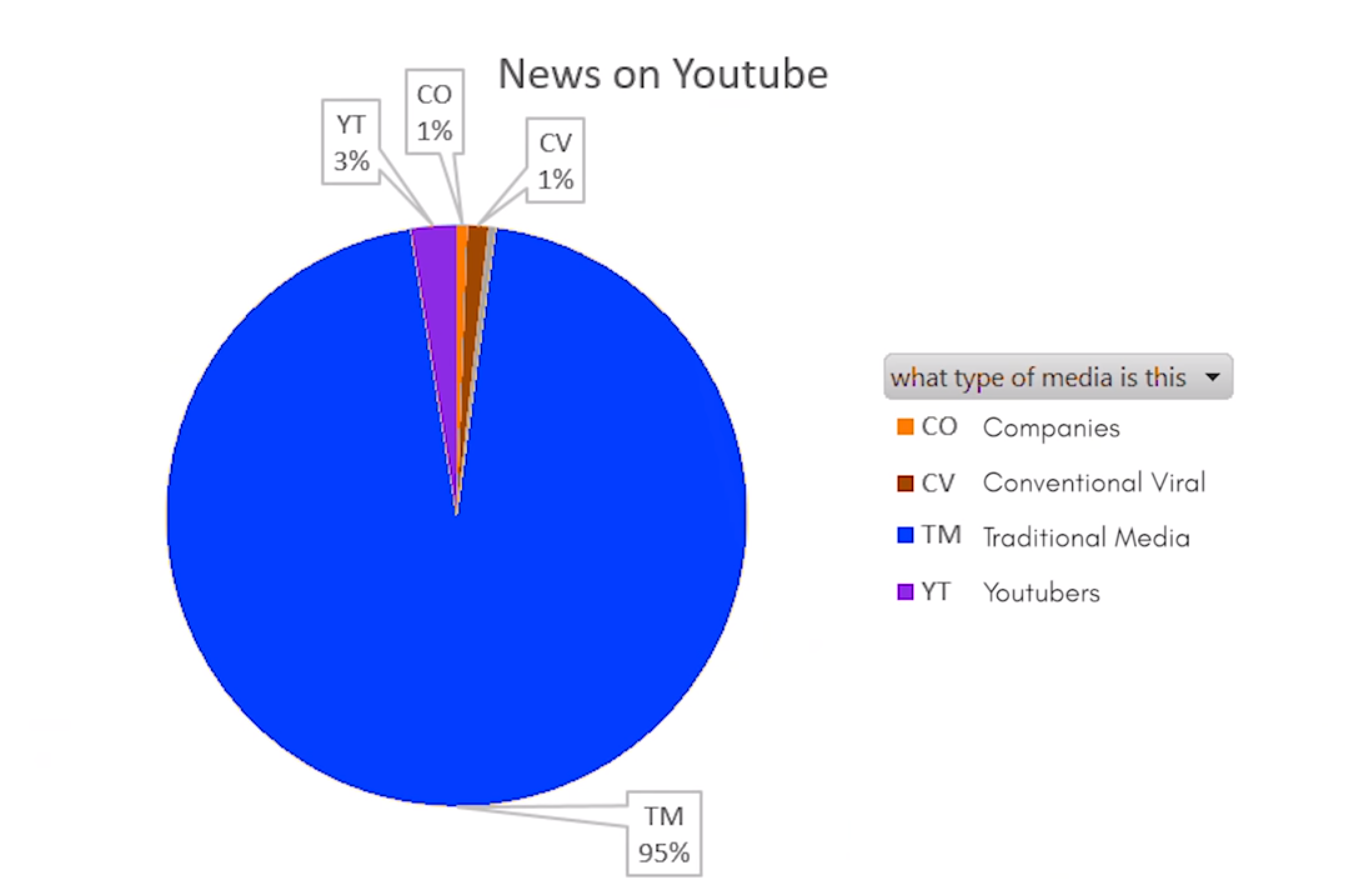 This is why you don’t see channels like Philip DeFranco or Tim Pool trending on YouTube even when they’re discussing hot button topic news or producing content not regularly covered elsewhere, even when they have a high number of views per video. This also ties into how YouTube purposefully disabled the filters during the Christchurch shooting back in March, and made it where basically the only videos showing up when searching for Christchurch were only from mainstream news outlets.

Basically YouTube is purposefully keeping certain content creators out of the trending tab. The video proposes the idea that manual content curators block certain creators from trending even if their content is racking up mad views in a short amount of time, similar to PewDiePie’s YouTube Rewind compilation, which never made it into the trending tab despite being viewed millions of times in a short period.

Funnily enough, when PewDiePie kowtowed to media pressure and told his subscribers to stop the “Subscribe to PewDiePie” meme, YouTube instantly made it trend when the Swede basically bent the knee to the Archdiocese of Agitprop.

This kind of inherent bias has been known to most people for quite some time, but it’s nice to finally see some data backing up what many conspiracy theorists had pitched from the start.

A second video was also put together by Coffee Break that outlines the methodology used to measure the trending data on YouTube. If you’re interested you can check that out below.

Now the real question is: what will come of this data?

YouTubers have been given insight into how YouTube allows or restricts certain kinds of content to trend. Will they fight back and put some effort into forcing YouTube to step away from their evil ways? Or will they give up and cede more of their freedoms the way PewDiePie did with the “Subscribe to PewDiePie” meme?

Given that most people have already been conditioned to the corporatocracy of today’s society, don’t expect much pushback from the average normies. They’ve been trained to be pressed under the boots of dictators, and are more than willing to accept vapid PR platitudes from YouTube’s higher-ups. Then again, most of them don’t seem to think they have much power to do anything given YouTube’s stranglehold on video creation. The only way most content creators would attempt to stick it to YouTube is if there were equally viable alternatives, and right now the only one is BitChute but it’s not quite there in terms of reach of or monetization.

So where does that leave us? Well, expect more empty groveling from various YouTubers and the typical business-as-usual attitude to follow thereafter, just until they get demonetized or deplatformed.

(Thanks for the news tip Mugen Tenshin)