A sizable expansion pack for Assassin’s Creed: Syndicate is called the Jack The Ripper DLC. It takes place more than 20 years after the events of the end of Syndicate and players will control both Evie Frye and Jack “The Ripper”. Players looking for a little help in completing the DLC will find some helpful walkthrough guides that complete the expansion from start to finish.

YouTuber XCV has a complete walkthrough of Jack The Ripper DLC for Assassin’s Creed and you can check out the playlist below.

The very first mission sees players hunting down Jacob as Jack, which mostly just introduces Jack’s abilities. When you play as Jack, you get some special abilities separate from the typical Assassins.

You can use FEAR to panic nearby observers with the “Brutal Takedown” skill. It’s a little like a quick-time event where players must complete the Brutal Takedown in order to drive anyone who sees you mad with terror.

Different levels of FEAR causes enemies to react differently. They start off calm, but when using a Brutal Takedown they will proceed to become anxious and then frightened. Jack “The Ripper” can force people to become frightened by using fear tactics and terror tools, such as the “Death Scream” and the “Spikes”.

Keeping enemies frightened makes it easier to take down multiple foes. It’s an interesting mechanic for the Assassin’s Creed franchise.

You can hold down the D-pad to Scream. 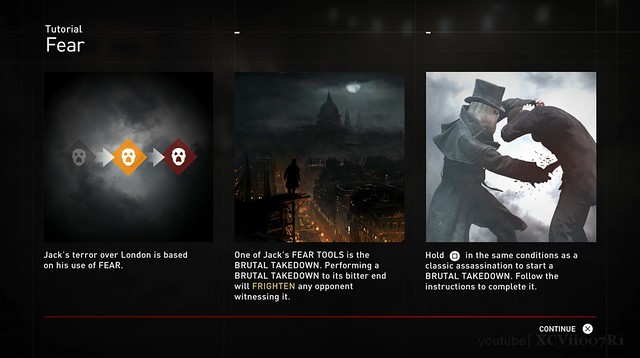 The second mission features Evie Frye as she has to investigate the scene of a crime. Using the Eagle vision Evie has to reenact the murder of a young woman and find the Assassin’s ring that she tossed away that bounced off a tree.

Evie’s next mission involves investigating Jacob’s old apartment. Using Eagle Eye, simply inspect the necessary points of interest. If you investigate the “Kali the Destroyer” statue on the mantel you’ll get the next clue and get a new location to investigate.

Speaking to the prostitutes will lead Evie to perform a rescue mission on a captured Nellie. It’s all pretty linear leading up to a short carriage chase.

From there, Evie will have to go after Lady Owers by attacking her snowy compound in the forest. There are a lot of enemies but doing things like scaring the gravedigger can help distract many of the enemies in order to get into the mansion.

In order to locate Lady Owers you must identify the spy and tail him to her location. He’s located in the back of the compound inside of a small guest house. Once inside, he’ll access a secret room inside the mansion that will eventually lead to Thomas Owers. You’ll need to take out the guards and kidnap Lady Ower’s husband, Thomas. 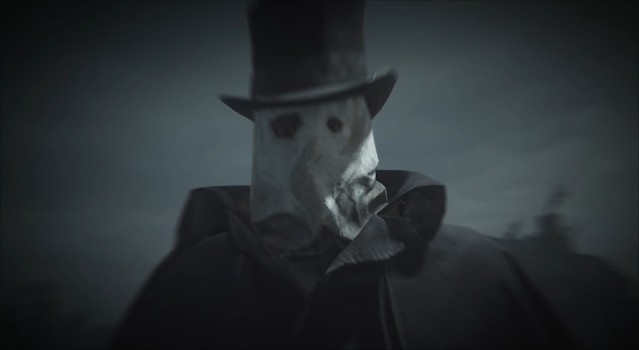 Once you reach Thomas, use him to get close to Lady Owers and then a cinematic will play where Evie will kill her. Make an escape to the carriage to complete the mission.

The next mission sees Evie searching for Mr. Weaversbrook, but the new mission objective has a condition that sees the police no longer being allied with Evie. So you can’t kill innocent police officers.

Save Weaversbrook from the thugs and follow the linear path in a carriage to the docks. Take out some more of the thugs at the docks and capture a spy to find out where to go next. The “Hulk Prison Ships” is the next target after rescuing Weaversbrook’s son on a boat located on the far side of the docks.

The prison hulk stage is a stealthy mission where Evie must sneak around, interact with prisoners and take out more of Jack’s men. It’s fairly linear and doesn’t feature any puzzles or trick situations.

The main objective will be to assassinate the warden of the prison. To aid Evie in doing so there are explosive boxes in a storehouse. Grab one and put it near a jail cell to free the prisoners who will distract a number of the guards. From here, you can get close to the heard guard carrying the key and lift it off him. Head to the warden’s position to assassinate him to end the mission.

The next mission sees Jack “The Ripper” going around killing all the witnesses and cops in the prison area. The mission is a straightforward kill-them-all mission that ends after Jack kills everyone and burns all the evidence.

The next mission sees Evie having to investigate more of Jack’s crimes, and must backtrack to the original location of the first crimes after using Eagle vision to decode Jack’s hidden message. 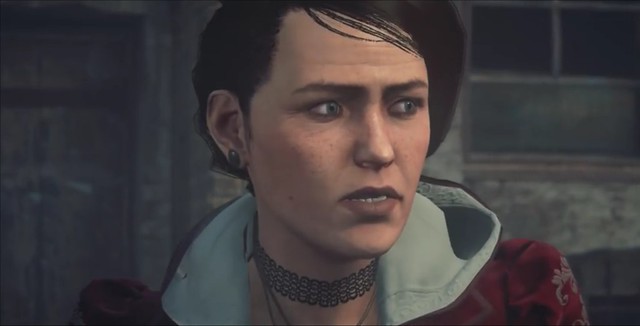 After chasing off the goons you must use Eagle vision to find the Assassin’s ring that Jack cut off from his victim. Follow the blood trails to discover the ring, which includes tracking them to a bird’s nest in the tree.

You must repeat these steps at the train station, where using Eagle vision will reveal that two more female Assassins died. You’ll find both rings in the hay stack just outside the building.

After heading to the final location, Evie must kill off Jack’s mental specters to end the mission.

The next mission involves Jack having to go kill nurse Whitney and erase all evidence of his past identity. He must strut into the madhouse and wipe all Doctor Archer and nurse Whitney while killing all the staff. It’s another straightforward kill mission.

The final part of the mission after killing Archer and Whitney involves erasing Jack’s identity in the hospital ledgers, and then freeing all the dangerous inmates locked behind the cells.

The final mission in the DLC involves Evie going to the asylum to face Jack in a final showdown.

You must use stealth to get through the mission and enter into the hospital. The best way inside is to capture an officer outside and calmly get close enough to a part of the wing where you can climb inside. Inside the surgical theater you’ll find Jack’s message, which will direct you to head into the basement. You can see the message on the wall using Eagle vision.

In the final fight against Jack you can just beat him down. If you can’t beat him normally, use a smoke bomb to run away and then attempt to get a jump on him.

After defeating his first form, you’ll need to defeat some crazy inmates before fighting him again. Once he comes back just run, hide, use a smoke bomb and then attack him from behind with a Brutal Takedown to finish him once and for all.

The Jack The Ripper DLC for Assassin’s Creed Syndicate is available right now for PC, PS4 and Xbox One.