The Odd Gentlemen finally completed their take on the retelling of Sierra’s classic King’s Quest series. The release of King’s Quest Chapter 5: The Good Knight concluded the series for the Xbox 360, Xbox One, PS3, PS4 and PC. For gamers who need a little help getting through some of the puzzles, there’s a walkthrough guide available.

YouTuber GamerrZOMBIE rolled out a six video playlist covering the newest and final chapter in the King’s Quest saga from The Odd Gentlemen. You can check out the playlist below.

The final chapter starts off with Graham and Gwendolyn talking about one final adventure that the magic mirror has promised. Gwendolyn is frustrated about possibly losing her grandfather to old age and why the doctors can’t just give him some magic to overcome old age, but Graham explains that there’s a bit more to it than that.

The final adventure that Graham talks about takes place during his twilight years, and players take control of the silver-haired king looking for one last adventure. Players will need to direct Graham to the town square.

Before getting to the square Graham must use the horn to call the bridge to connect it to the other side. However, fire will block the pathway, so you’ll need to head over to where the trolls used to be. You’ll need to have Graham remember the space as a sandbox first and get the sandbox pal. Then leave and go back and have him remember that the space was turned into a commemorative fountain, and then use the sandbox pal to pick up some water from the fountain. Head back to the bridge with the fire across it and put the fire out. 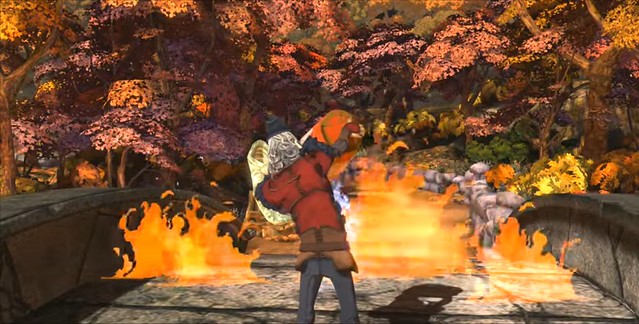 You’ll need to travel down the right path to get to the town after talking with Olfie. Head toward the flaming spot where Graham’s statue is seeming on fire.

You’ll need to gather up some of Graham’s personal belongings before everything burns. You can grab the chest and slowly move to the exit, along with the shield and trophy.

The next video covers Graham recalling details he left out of some of the stories he told before. Players will have to complete a musical puzzle in order to access one of the secret memories. You’ll need to play Wente’s song, which is covered at the 2:00 minute mark in the video below.

The next puzzle involves getting everyone on the switches in the frozen castle. It’s a short puzzle that won’t take up too much time, you just have to move each character up to the top by moving Graham.

Following the completion of the puzzle will revert back to Graham after recovering from being exhausted by the fire in the forest.

Head into town and go into the empty bakery. You’ll find a commemorative plate on a stool on the left hand side of the bakery.

Manny will task Graham with another challenge to prove his strength and wits. Players will need to head to the old tournament Colosseum. Grab the candlestick from off the table and you’ll need to figure out the combination for the lock.

Head back outside across the bridge and in the second bush down the path you’ll find an item inside. You’ll also find a fruit picker in the pumpkin garden.

Proceed back into the cave where there is a crevice in the rock and use the lit candle to read the note inside the crevice. You’ll gain access to a shovel.

Head past the troll cave where there’s a ladder stuck inside. Use the fruit picker to knock the commemorative plate down from the tree.

Head over to the key that’s high up in the huts and use the ladder to climb up and grab it.

If you head down into the hole where the leaves are surrounding an open pit, climb down and use the shovel to dig up the note and the knife.

Proceed to the area marked “Don’t Turn Right” with the blue arrow on the sign and you’ll encounter a circular pedestal. Place the commemorative plates on the pedestal and align them in the following order to complete the puzzle. 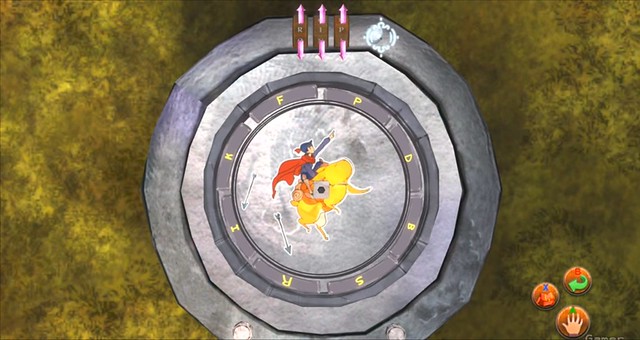 Put in R.I.P into the tablet to unlock it and take the key.

The numbers correspond to the chest lock combination at the tournament hut, with the order of the numbers represented by the animals on the chart.

Proceed back to the tournament Colosseum and input the codes to unlock the chest. The code should be: 7829

After getting all four keys, head back to the town where the chromium lock is and use all four keys – the red, blue, green and yellow keys – to unlock the door.

Proceed to the well with the crank and use the lower the bucket to allow Graham to climb down into the cavern.

After a few short cut-scenes Graham will be tasked to follow the sign posts leading toward a crystal.

The next playable segment involves going back to an old 8-bit style depiction of King’s Quest where you need to examine some things, including talking to Graham’s kids, examining the environment and then falling to your death when crossing the bridge. This leads toward Graham going through a 16-bit color point-and-click adventure, similar to King’s Quest 5 and King’s Quest 6. 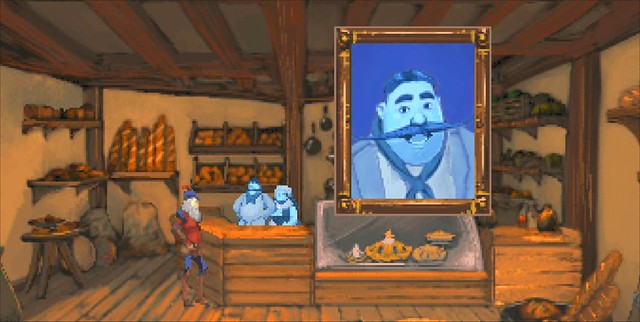 Grab a piece of the crystal after Graham wakes up and give that and the Chromium lock to Mordack.

Before Graham passes on, he entrusts Gwendolyn with finishing his story. He helps her along the way as he retells how he and Manannan faced off in one final battle.

In the first puzzle there are four cups and the puzzle can be a bit tricky. However, cup number ‘3’ is safe to drink.

The next puzzle will require checking the appropriate fruit with each animal. You can see which fruit align with which animals in the image below. 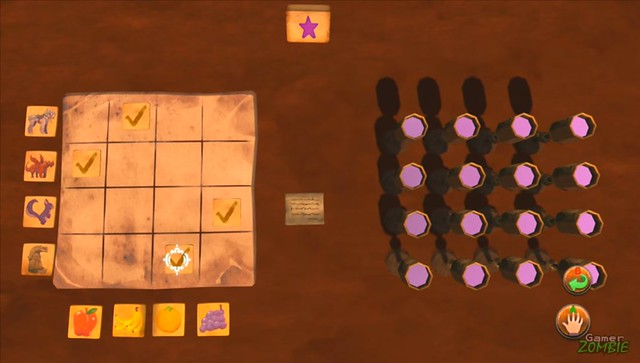 The next series of puzzles are a mix of number riddles. The images below will show you how you need to align the puzzles in the final showdown in order to make it to the next segments. 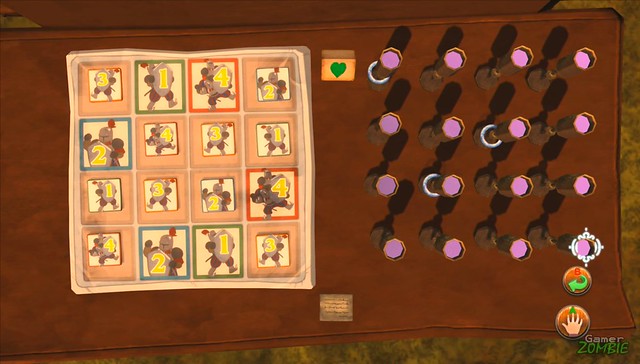 After you manage the correct placements for the puzzles, you’ll need to highlight the corresponding cups in order to complete the challenge, as highlighted in the image below. 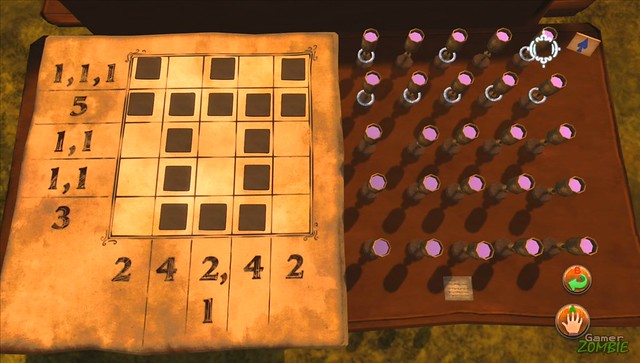 The next two puzzles can be a little tricky, but you can see how to complete them by using the video guide below at around the 10 minute mark. For the second to last math puzzle, the correct cup is the one that is the second from the far right.

The final confrontation is a game of chance. The final challenge is literally an homage to The Princess Bride, with Wallace Shawn reprising the exact same game he played with Cary Elwes’ Westley involving the poisonous game of chance.

However, unlike The Princess Bride, Graham was unable to overcome the poisonous elixir.

The final segment involves Gwendolyn – players get to walk down a hallway filled with embroided tapestries of the family’s adventures, one of which includes a nice little nod to King’s Quest 6.

King’s Quest: Chapter 6 ends with Gwendolyn blowing out the candle, taking Graham’s adventuring cap and leaving for her own adventures.