The Showcase mode is not available in WWE 2K17. Last year there was the Showcase mode for WWE 2K16 featuring Stone Cold Steve Austin. This year, however, there is no Showcase mode, instead there’s just a focus on the WWE 2K17 MyCareer story mode. For gamers looking for a walkthrough of WWE 2K17 there is one available that goes through the MyCareer mode whether you’re playing on Xbox 360, Xbox One, PS3 or PS4.

DSP Gaming goes through all of the game’s options, modes, music and gameplay modes. DSP is actually pretty dead-on with a lot of his commentary about the characters in the game.

If you want to create your own custom character using your face, you’ll have to create a custom token before you can create and import your own face. After creating a token, upload your picture through the WWE website, and then download the face through the logo importer by downloading it from the community section.

Keep in mind that you’ll need to have your face adjusted to the dimensions of the preset head as depicted in the image below. 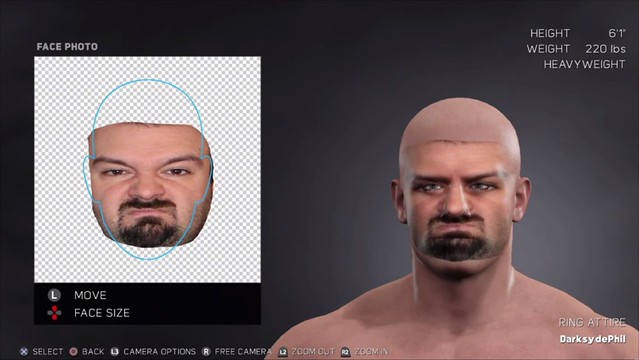 If you want a full goatee it’s actually located in the full beard option. Also, facial hair and the hair on top of your head is also in the attire section, not in the head or body section of the create-a-character mode.

Take note that if you first start MyCareer mode and create a custom character during MyCareer mode then you won’t be able to change their attire until you complete the MyCareer tutorial mode.

At the 13 minute mark in the video the actual MyCareer mode actually starts. It begins with Finn Balor versus Sami Zayn where Balor shakes hands with your custom created character.

You’ll need to do the training in the WWE Performance Center with your character. If you need to see how the controls work, you can check the WWE 2K17 controls guide to help you out.

After completing the training against the jabroni scrub you then have to face off against another superstar like Samoa Joe in the Performance Center. Simply wrestle and defeat the superstar during training, as you showcased in the video below.

Beating Samoa Joe opens up the new promo feature where you’ll need to cut your own promo.

The promo feature works based on selecting various starting options based on what best suits your character. Depending on how you start the promo and the direction you take in addressing the crowd depends on whether or not they favor you as a face or a heel, which is briefly covered in the video above.

You only have a limited amount of time to select promo options, working a little bit like the dialogue meter from Mass Effect games. There are four different promo types that you can cut, including family-friendly, hardcore, respectful and disrespectful. You have to adjust your tone based on the crowd and the city you’re wrestling in.

Your first promo challenge will you see you going against another WWE mainstay like Enzo Amore in a promo battle. You’ll have to out-talk your opponent to win the segment.

After finishing up the tutorial mode in the MyCareer mode you’ll then be able to choose your character’s clothing attire.

Following the customization of your character you’ll then be able to have your first match in the main portion of MyCareer.

Keep in mind that winning or losing will change the career path of your custom character. In between your wrestling schedule you can modify your character’s stats and abilities, along with moveset and attire.

In the WWE MyCareer home page you’ll see things like what your next scheduled match will be, what your overall stats are, your ranking for the next belt, your status with the authority, your allies and rivals, as well as your status as a face or a heel. Heck, you can even see how well your character’s merchandise is selling.

Within the character menu, you can change the character’s attributes, abilities, skills, their manager, their appearance, entrance, move-set, victory poses, video, and other options. It’s also possible to export your character online for others to play.

You can earn points and upgrade your character’s stats, which will then allow you to get stronger and defeat stronger opponents.